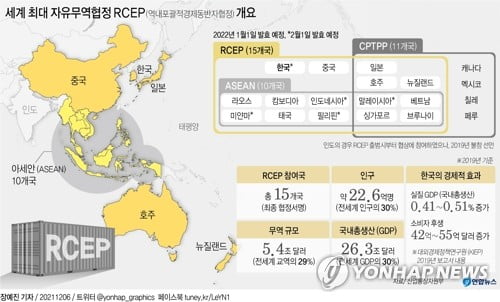 This is in accordance with the regulations that require the agreement to enter into force 60 days after the government’s deposit of the ratification instrument (December 3, last year). done.

As Korea’s ‘trade territory’ increases due to the entry into force of the RCEP, it is expected that the export area will further expand to games and movies in addition to the existing main export items such as automobiles, steel, and parts.

RCEP is a mega-FTA that accounts for one-third in terms of population, trade volume, and gross domestic product (GDP) of countries around the world.

Among them, Japan is a country that has not entered into an individual FTA with Korea, and the effect of concluding an indirect FTA through RCEP has also occurred.

Korea’s exports to RCEP member countries account for about half of all exports.

The 10 ASEAN countries have further opened up their product markets to Korea through the RCEP.

In service trade, the treatment of nationals and most-favored countries and the opening of ASEAN’s cultural contents and distribution sectors are included.

In addition, the rules of origin integrate the criteria of origin for 15 countries, simplifying the procedures for certification and notification of origin.

As the RCEP goes into effect, Korea’s product exports are expected to expand, and the path to overseas expansion is expected to include cultural contents and other services.

Korean companies will benefit from plastics and synthetic resins in Japan, medical and imaging equipment parts in China, automobile parts and steel in Vietnam, and cultural contents and distribution in Indonesia, Thailand, and the Philippines. predicted.

In the case of China, which has already signed an FTA with Korea, items such as medical devices, imaging device parts, and semiconductor manufacturing parts are expected to benefit.

In addition, Vietnam has decided to eliminate tariffs on auto parts, machinery and some steel items.

For the smooth implementation of the RCEP, the government has completed preparations such as amending relevant laws.

In order to increase the utilization of FTAs ​​by Korean companies, the government has built a database where you can easily find information on tariff rates and country of origin.

Scientists are concerned that the number of BA.2 subspecies of omicron cases is soaring in Asia-Europe.