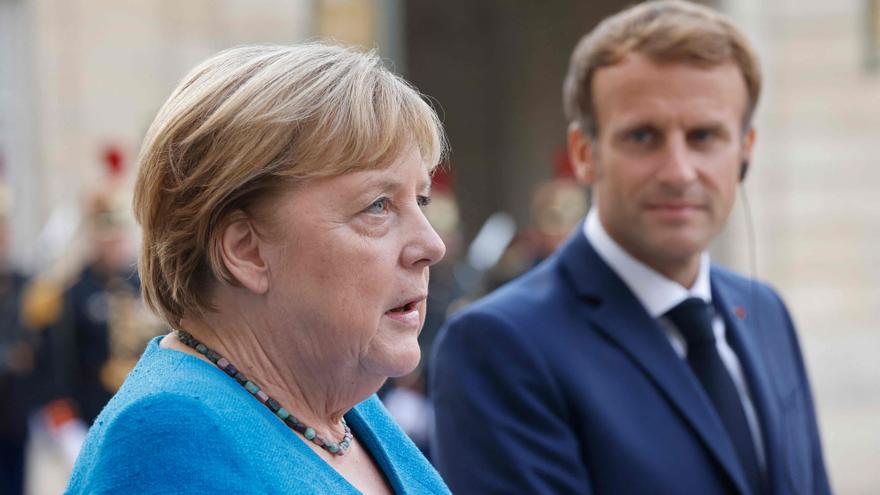 The German Angela Merkel He climbed the stairs of the Elysee Palace this Thursday afternoon, probably for the last time. The CDU leader made its last visit as chancellor in Paris, where she met with the French president, Emmanuel Macron. The joint appearance between the two leaders and their working dinner did not make big headlines. But it was Merkel’s final chapter in Franco-German relations, marked in the 16 years of “merkelato” by the consolidation of the European hegemony of Germany and the feeling of inferiority of France.

Thank you very much, dear Angela, for being in Paris tonight. It is a great pleasure and an honor to receive you, “said the centrist leader during his brief speech to the press, prior to the meeting between the two leaders. “We will do everything in our power to avoid a too long waiting period,” said Merkel, who traveled to the French capital ten days before the uncertain general elections on September 26 in Germany, in that the SPD has taken advantage of the CDU, according to the polls. “From now until the formation of the next government, the chancellor and I will continue working side by side on the large dossiers in which we can provide a Franco-German solution,” said Macron.

The situation in Afghanistan it was the main subject treated by both leaders. They also examined other thorny international issues, such as Libya, Ukraine or Belarus. European issues were not absent. In fact, they prepared the summit between the European Union and the Western Balkans in Ljubljana, scheduled for October 6, a date when Merkel’s successor will probably not yet have been named. “The agenda on the climate change it is heavily loaded and we must see how to move forward as quickly as possible and at the same time protect our industrial base in Europe ”, explained the chancellor.

The last meeting between Macron, 43, and Merkel, 67, came at a time of a certain honeymoon between the two leaders. Despite her status as a little girl in the eyes of the establishment Teutonic, the arrival of the young leader to the Elysee did not suppose the planned idyll between Paris and Berlin. Their contacts were constant, but there were obvious discrepancies between the two executives. They were motivated, above all, by the reluctance of German conservatives to reform the euro area and promote a joint budget of the countries of the common currency.

However, the situation took a Copernican turn with the pandemic. This led to the European recovery plan endowed with 750 billion euros (between aid and loans) and driven by an agreement between Macron and Merkel in May last year. Since then, Franco-German relations have been more than fluid, despite some occasional tensions due to border controls due to Covid-19.

The French president met this week with the two main candidates to replace Merkel: the conservative Armin Laschet and the social democrat Olaf Scholz. Following the September 26 elections, Germany will likely enter a period of complex negotiations to form a new executive. Four years ago, inter-party discussions lasted more than six months. Which made it difficult for Macron to strengthen his ties with Merkel and advance his EU reform agenda.

The young president could now take advantage of this possible power vacuum in Berlin to reinforce his European leadership. It will have the advantage that France will have the rotating presidency of the EU from 1 January 2022. With Merkel’s goodbye, Macron hopes to increase his influence in a Europe dominated by Germany during the “merkelato”.