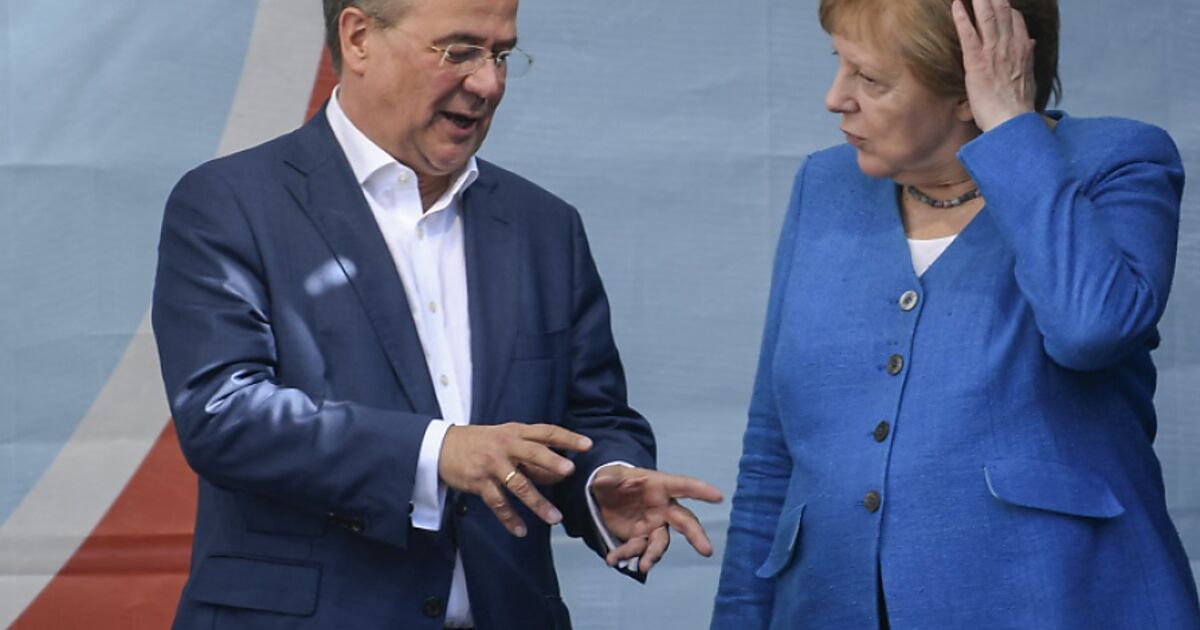 At the end of the Bundestag election campaign, the outgoing German Chancellor Angela Merkel again vigorously campaigned for Union Chancellor candidate Armin Laschet and votes for the CDU and CSU. “Tomorrow it’s about Germany remaining stable,” she said on Saturday at the last election campaign appearance together with Laschet in his hometown Aachen. “And it doesn’t matter who rules Germany.” SPD chancellor candidate Olaf Scholz spoke at his place of residence and constituency of Potsdam.

Laschet warned again against the participation of the left in a federal government. “We need a stable government,” said the CDU federal chairman. The left wants to get out of NATO and “another republic”. He predicts that “if there was a majority for red-red-green tomorrow, they will do it”. Therefore, the last few hours should be used to point out to everyone: “If you want stability in Germany, the CDU / CSU must be in first place tomorrow.”

Laschet called for more speed in the expansion of renewable energies. Approval procedures would also have to be accelerated for this. “We’re too slow in Germany,” he said. The goal of climate neutrality by 2045 is ambitious, said the CDU leader amid interjection from opponents. Laschet accused the SPD of having been the “coal party par excellence” in North Rhine-Westphalia for 50 years and now pretending to be “at the forefront of the environmental movement”. He also warned against “ideological experiments” in economic policy in the event of an election victory for the SPD. This means that “everything that we have built up over the past 16 years will be gambled away”.

The Union and its candidate for Chancellor Laschet are under immense pressure ahead of the election on Sunday. Merkel will no longer run after 16 years in office. In view of the large number of undecided voters, the outcome of the election is considered open. In the polls, the SPD and its top candidate, Vice Chancellor Olaf Scholz, were last able to maintain their leadership, but in some cases only barely. Depending on the polling institute, it was 25 to 26 percent – and thus one to four percentage points ahead of the Union. The Greens with their candidate for Chancellor Annalena Baerbock are in third place in the polls.

Merkel praised Laschet’s leadership style and his contribution to the unification of Europe. As Prime Minister of North Rhine-Westphalia he led successfully. Wherever he “stands and goes, wherever he has spoken to us,” he also spoke about the European Union’s work of unification. Laschet’s actions are characterized by “building bridges and taking people with you”. He has shown in his entire political life that he stands for solidarity and the CDU, not only theoretically, “but with passion and heart”.

Around 700 visitors to the rally celebrated the Aachen politician with “Armin, Armin” shouts and “Armin Laschet becomes Chancellor” in bright sunshine. But there were also heckling calls from opponents. Merkel said there was “a lot of work left for Laschet as Chancellor.” Unemployment has indeed fallen. But 2.4 million unemployed are still too many.

In Potsdam, Scholz once again focused on social policy. With him as Federal Chancellor, “life will be affordable,” said Scholz on Saturday in the Brandenburg capital. He addressed the subjects of housing, pensions and the minimum wage. Scholz also went into the fight against climate change. The SPD candidate for Chancellor gave only a very short speech in Potsdam; the audience could then ask questions. Scholz said he would work to ensure that there were enough affordable apartments in Germany.

There will be no increase in the retirement age with the SPD. In the first year, the minimum wage will be raised to twelve euros per hour; that means a raise for ten million people. When it came to climate protection, the people at the demonstrations on Friday “put their fingers in the wound,” said Scholz. Global man-made climate change must be stopped. Germany could create the technologies that could be used in other parts of the world to achieve this goal. Scholz expressed his hope that the election result would enable a change. “Maybe it will work out for a government made up of the SPD and the Greens. We’ll see.”

Other parties also use the day before the election for rallies. Green Chancellor candidate Annalena Baerbock had no more official election campaign events on Saturday.

Tomorrow, Sunday, the citizens will decide on the composition of the next Bundestag – and thus indirectly also on the next German government. Around 60.4 million eligible voters are called to vote. It is expected that this time as many as never before have cast their votes by postal vote. At the same time as the federal election, a new state parliament is elected in Mecklenburg-Western Pomerania, and the state of Berlin has the House of Representatives.