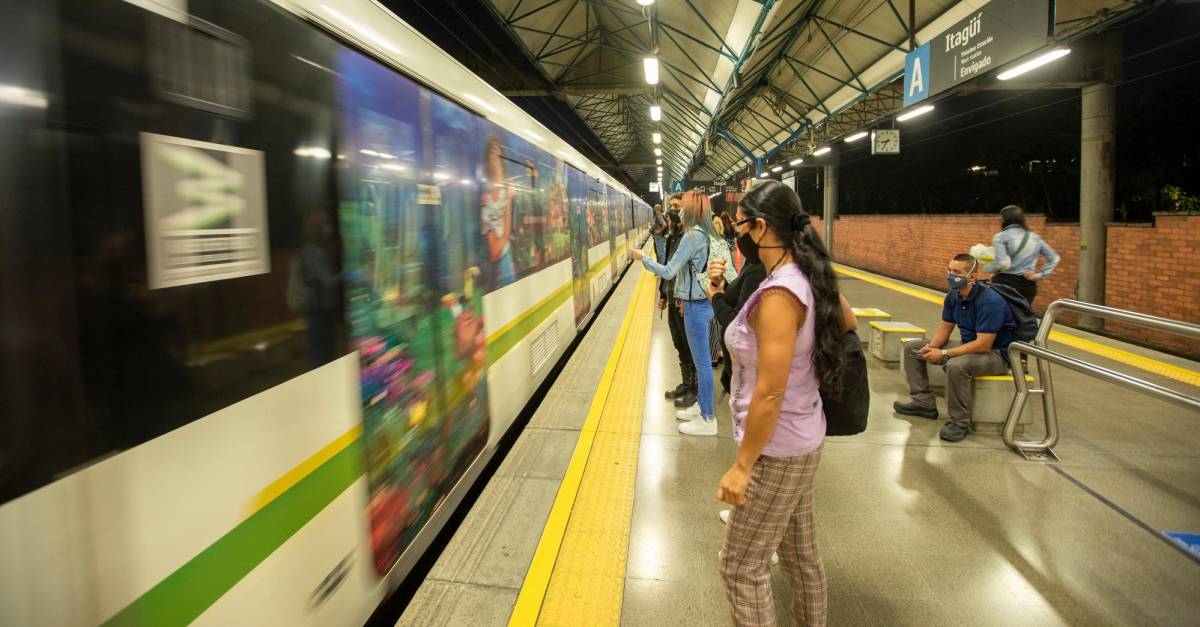 The service routes include the tram, metrocable and metroplus.

Faced with the new case of sexual harassment in the Medellín Metro, the entity reminded its users that it has designed an entire care protocol that catalogs these situations within the system such as emergencies that require a maximum level of attention from your servers.

For this reason, the Medellín Metro indicated that in the event of sexual harassment within any of the transport systems of its system (such as Metrocable cabins, Metroplus articulated cars and Tram cars), any user –whether victim or witness– is allowed to activate the security elements, such as the red button, to report the situation to Metro staff.

“When the button is activated, an alarm signal is generated with the Metro Central Control Post, which at the same time generates a message for the station operator, so that when the vehicle arrives at the next station, the operator will be exactly at the station. door in which the button was activated to deal with the event immediately. Likewise, cases can be reported to any member of our staff.”, explained Cristina Ledezma Cano, Social Management professional of the Medellin Metro.

The campaigns carried out by the entity since 2019 have been strongly focused on training its staff to properly deal with cases of sexual harassment within the Metro without revictimizing those affected and in the internalization of effective care routes to ensure that the victims feel accompanied psychologically and legally by the entity and make the respective reports and criminal complaints to the authorities. To this end, the contribution of the Secretariat for Women and its programs has been fundamental.

“In 2021 we developed a whole process training of 280 employees in handling these cases of harassment, which not only included our staff of station operators, auxiliaries, educational guides, private security guards and the Police, but also officials from levels within the organization,” added Ledezma.

Despite the fact that a decrease in registrations is observed, for the Metro the level of reports continues to be low. It is suspected that this would be associated with issues that touch the cultural, the taboo, and the way women are educated so that these issues are not aired.

Since 2019, the Metro has bet on strategies that seek to give victims of sexual harassment within the System accompanying tools to deal with this problem. For this reason, the system joined the Safe Territories for Women and Girls program that same year.

This was initially focused on providing information so that women and girls could identify those situations that could be classified as sexual harassment within the system and in which they could find themselves immersed not only in the Metro but also in other spaces; as well as the channels and routes designed from the institutional framework to give them attention. From that moment on, the use of the red button began to be included as a way to alert about cases of harassment.

“In 2020 we did another campaign with a strategy called Lines that must not be crossed. Again, the issues of self-care, identifying acts of harassment and making the report were reinforced, “added Ledezma.

Finally, in 2021 a new strategy was launched in which apart from reinforcing the previous points System users were invited to act if they witnessed cases of sexual harassment in the Metro. For example, they were invited to go to the station staff and to carry out actions other than violent confrontation against the harassers.

“Any Metro official or business ally knows that if they are made aware of a case of sexual harassment, they must immediately activate the procedure and route. The idea is that women know that the Metro is here to accompany them and that the report and the complaint are essential to prevent these events from happening again”, said the Social Management professional.

Yemen: internet cut in the country after a coalition airstrike