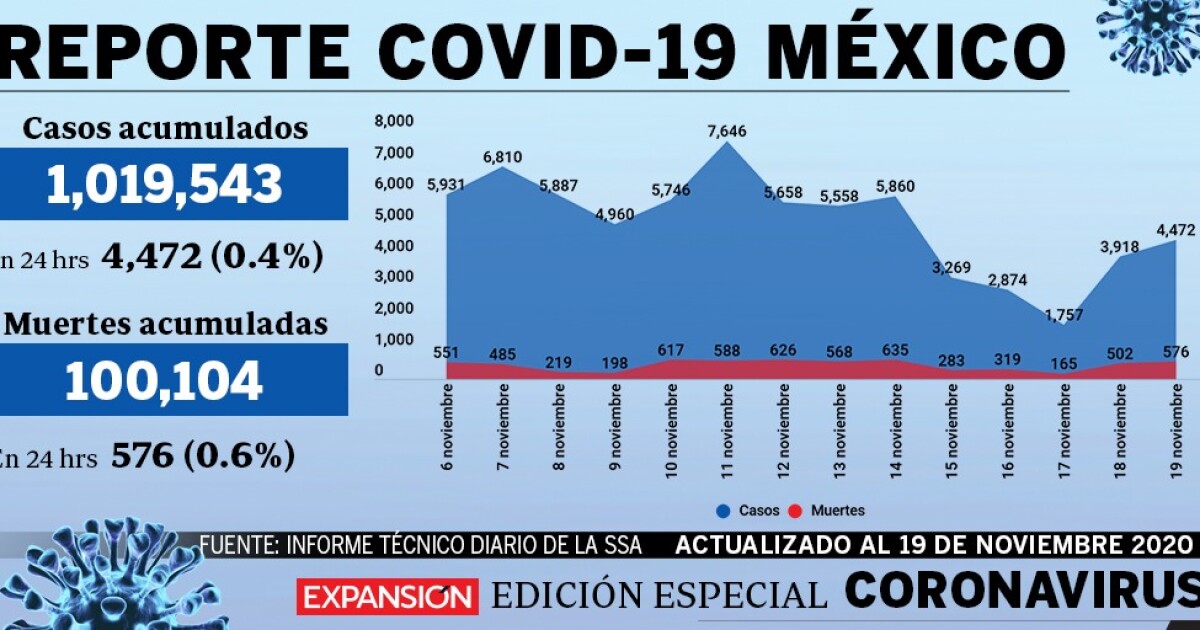 The first death of a person due to the coronavirus was officially recognized on March 18, since then 247 days have passed, in which an average of 405 deaths have been registered in each of them.

Mexico has been for a month and a half the fourth country that accumulates the most deaths from COVID-19, only surpassed by the United States, Brazil and India, whose number of inhabitants is much higher.

If the deaths per 100,000 inhabitants are taken into account, Mexico is the fifth country with the most cases, but it is ranked number one in terms of fatality rate – the proportion of people who die from a disease among those affected – among countries most affected by the pandemic.

The figure presented by the federal Ministry of Health does not represent all of the deaths that the pandemic has caused in the country, as the health authorities themselves have recognized, but it does represent the cases that so far have been confirmed by the three methods used. : laboratory test, by association with a contagion – people who did not undergo a test but who had contact with someone who died or was infected with COVID-19, in the 14 days prior to presenting symptoms -, and by opinion – In which, based on their antecedents, the cause of death is determined in the absence of a sample.

Throughout the pandemic, Mexico has registered an excess of deaths, that is, more than it had projected without the presence of the virus that has claimed more than 1.3 million lives in the world. Until September 26, the date of the last cut released by the federal government, 139,153 of those deaths were attributable to COVID-19, of which 78,449 deaths were confirmed on that day.

Both the means of ruling and the estimation of excess deaths were implemented by the federal government in the face of criticism from experts and the national and foreign press about the underreporting of the advance of the pandemic in the country due to the small amount of tests that are applied, As of this Thursday, 2 million 649,000 studies have been carried out, of which 1 million 19,543 have yielded a positive result, a low figure if one takes into account that there are 125 million inhabitants in the country.