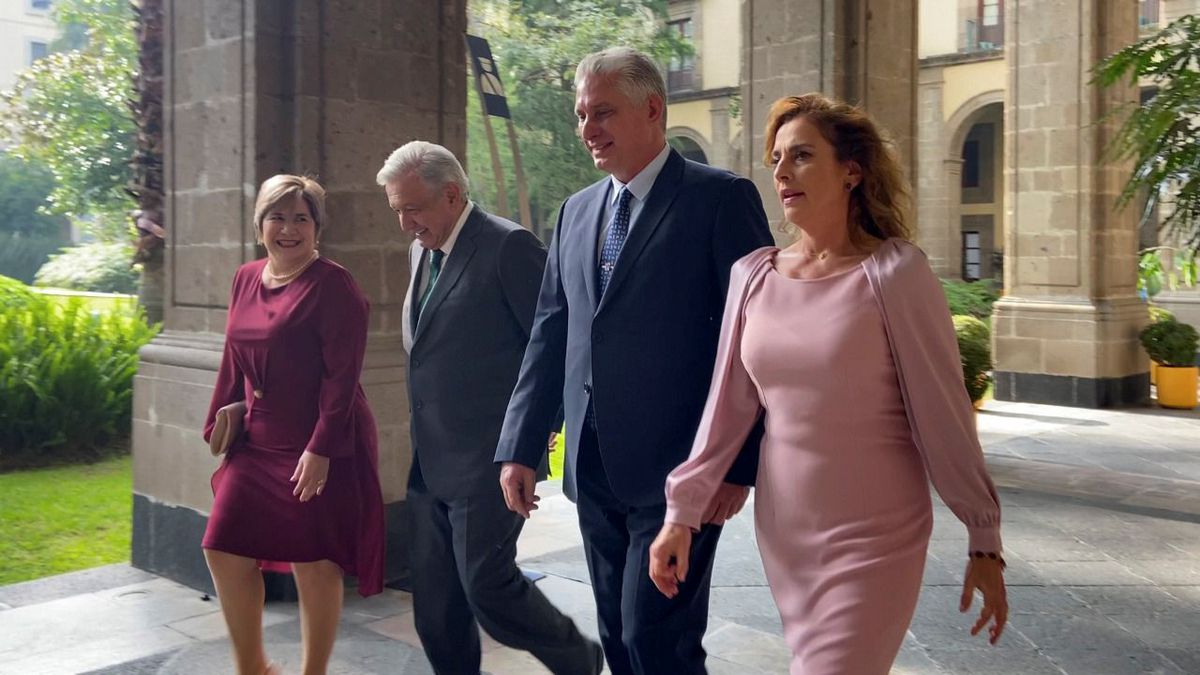 The commemorative acts of the Independence of Mexico that started this wednesday night This year they have a controversial protagonist. The invitation of the President of Cuba, Miguel Díaz-Canel, who will participate this Thursday in the official ceremony together with Andrés Manuel López Obrador has stirred the celebrations between demonstrations of rejection by opposition leaders. The Mexican president has defended the visit, ensuring that the country “has its doors open to all rulers.” Díaz-Canel, who has already landed in Mexico City, two months after the protests against his Government amid the growing fatigue of the population, will also join the summit of the Community of Latin American and Caribbean States (Celac) that will be held celebrated on Saturday in the capital.

“He will be at the ceremony on the 16th,” confirmed López Obrador, who assured that he also invited Joe Biden on the occasion of the events of September 27, although the US president will not be able to attend and will send the Secretary of State, Antony Blinken . Participation in the military parade The top leader of the Cuban regime aroused controversy as he was a special guest, who will also offer a speech. “Both civil and military authorities come to the December festivities, they come from all over the world, they are invited to Mexico. So, we cannot invite some and not others ”, justified the president.

The vindication of the idea of ​​sovereignty, one of the axes of the Government’s political action, flies over the visit. Just a few weeks ago, López Obrador asked Biden to interrupt the economic blockade of Cuba and soon “make a decision” about it. “It is a respectful call, from no interfering point of view, but we must separate the political from the humanitarian, life is the most important thing, it is the principal of human rights,” said the president. Díaz-Canel personally requested his help by letter and Mexico sent two shipments of humanitarian aid and medical supplies at the end of July.

“We are a free, sovereign country,” added the president when he appealed to the Article 89 of the Constitution, which establishes that the Executive must act in diplomacy observing the principles of “non-intervention”, “the self-determination of the peoples” and respect for human rights, among others. “That is our foreign policy, so that is why we invite everyone. Mexico has the doors open to all rulers, we are friends of all the peoples of the world, ”he said. In the midst of the July mobilizations, he had also come out in defense of the Cuban president: “There must be no interventionism. The health situation of the Cuban people should not be used for political purposes. That should be put aside. No politicization, no media campaigns, which are already taking place worldwide ”.

Díaz-Canel already attended López Obrador’s inauguration in 2018 and almost a year later he returned for an official visit. Before traveling, this Wednesday, he wrote on his Twitter account that “the Mexican Revolution was a source of deep inspiration for the Latin American revolutionary movement” accompanying the phrase on the label “Fidel lives.” President Castro, who died in 2016, traveled a dozen times to the country. It did so during the PRI’s mandates and also under Vicente Fox, from the PAN. On that occasion, the former Mexican president asked his Cuban counterpart to leave the Extraordinary Summit of the Americas in 2002 to avoid an awkward encounter with George W. Bush. According to an audio broadcast by Havana, he told him: “It is not very friendly to notify at the last minute that you appear here … I do not know when you intend to come, but my proposal would be that you come on Thursday … that you participate in the session, make your presentation. Afterwards, we have a lunch, which is offered by the governor of the state to the heads of state. Even I offer you to be at that lunch and sit by my side and that once the event is over you will return, that you will leave me free on Friday, that it does not complicate Friday for me ”.

Now, one of the politicians who has criticized Díaz-Canel’s visit the most has been former PAN president Felipe Calderón. even calling the Cuban “genocidal and dictator” and comparing him to Hitler. “Well, it’s good that you don’t like it. Out with masks, ”López Obrador replied.