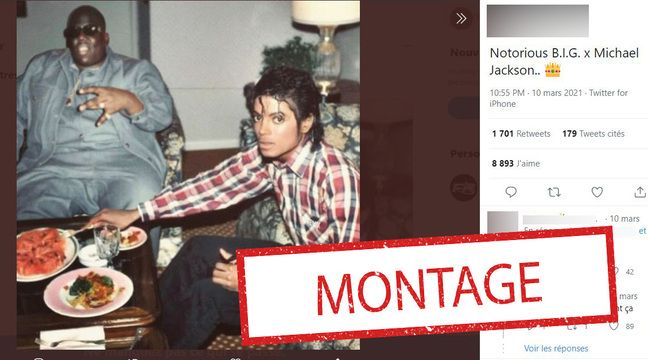 “Two legends”, “incredible”, “they weigh millions but I have the impression that they are at Auntie Régine’s there”… A photo of Michael Jackson and Notorious B.IG., posed in flowery armchairs smelling good retro around a meal, went viral on Twitter the day after the anniversary of the rapper’s death, assassinated on March 9, 1997.

However, several elements put the chip in the ear on the authenticity of the image, as noted by Internet users: the youth of Michael Jackson in the photo suggests that it was taken in the 80s, as Biggie’s career took off in the 90s.

The editing is the work of Vemix. On March 9, this artist, whose identity is unknown, published a series of diverted photos in homage to the rapper. The Notorious BIG appears there alongside Beyoncé, Frank Sinatra or Kurt Cobain and 2pac. He also had
already published this hijacking a little over a year ago on his account.

Vemix made a specialty of these misappropriation of photos of musicians. One of his montages with 2pac and Donald Trump
had already been taken in the first degree. Snoop doog
reposted a montage showing him with Kurt Cobain, without it being known if the rapper was fooled or if he was aware of the deception.

To create this montage, Vemix started with a photo of Michael Jackson, where the singer is seated alone. The picture is part of a series taken in 1984 by photographer Sam Emerson.

L’image de Notorious B.I.G is drawn of an undated photo of the rapper with his wife Faith Evans. An Australian newspaper
attribute it at Lamont Mosley.

During their lifetime, Michael Jackson and Biggie had collaborated on the title This time around, released in 1995 on the album HIstory. The singer had also covered a performance of the rapper on his album. Invincible, released in 2001.