Microsoft has made available a preliminary version of the Windows Subsystem for Linux (WSL) for Windows 11 in the Microsoft Store. This is not a new version of WSL; Microsoft is simply making the existing WSL 2 available in the Store as an option at this point. Microsoft’s goal in doing this is to provide users with the latest WSL updates and features faster, according to the blog post announcing the new Preview.

Last year, Microsoft introduced an evolution of WSL: WSL 2. This new version of the architecture which allows the Windows for Linux subsystem to run binaries ELF64 Linux on Windows uses a real Linux kernel, changes the way these binaries Linux interacts with Windows and your computer hardware, while providing the same user experience as in WSL 1. WSL 2 offers much faster file system performance and full system call compatibility, allowing you to run more applications like Docker!

This new version of WSL 2 uses Hyper-V functionality to create a lightweight virtual machine with a minimal Linux kernel. Expect better compatibility with Linux software, including Docker support, and a dramatic increase in file system performance.

The Windows for Linux subsystem is not perfect on Windows 11, but has improvements.

Initially, installing WSL was more complicated than it should be. In Windows 10 build 2004, which brought WSL 2, Microsoft fixed this. Just open a raised command prompt (start -> type cmd -> click on Run as administrator), type wsl –install prompt and you can begin. Windows 11, fortunately, continues this process unchanged.

A simple wsl –install without further argument allows you to get Hyper-V and the other WSL fundamentals, as well as the current version of Ubuntu. If you are not an Ubuntu fan, you can see what other easily installable distributions are available with the command wsl –list –online0 If you decide that you prefer a different distribution, you can install it instead with, for example, wsl –install -d openSUSE-42.

If you are not sure which distribution you prefer, don’t worry. You can install as many as you want, just by repeating wsl –list –online to number your options and wsl –install -d distroname to install whatever you want.

Installing a second distribution does not uninstall the first; it creates a separate environment, independent of any other. You can run as many of these installed environments as you want at the same time, without worrying about one disrupting the other.

In addition to easy installation, WSL on Windows 11 supports both graphics and audio in WSL applications. 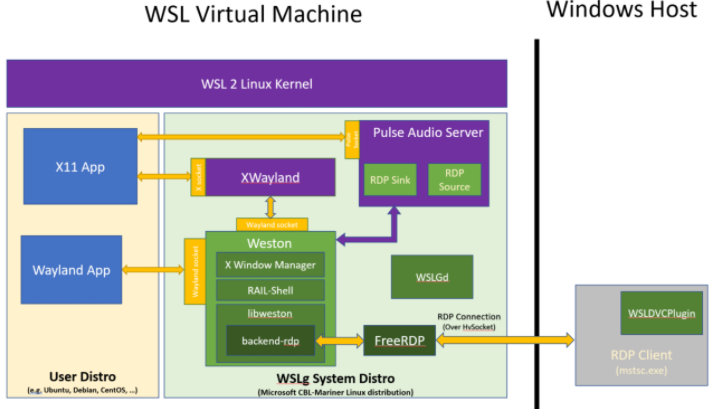 Until now, WSL has been installed as an optional component in Windows. As stated in Microsoft’s post, the binaries that make up the WSL logic in this optional component are part of the Windows image and are therefore maintained and updated when the operating system itself is. By decoupling WSL from the Windows image and making it a separate app available in the Store, users can get updates to the app regardless of the operating system.

Windows Subsystem for Linux (WSL) Preview is now available in the Microsoft Store as a standalone app for Windows 11 machines *! Installing WSL through the Store will allow you to get the latest WSL updates and features faster, and without having to change your version of Windows, Microsoft explained.

There are two big reasons to be excited about this change: you can access WSL features faster, and you don’t have to worry about changing your version of Windows when you get the latest WSL updates.

Traditionally, WSL has been installed as an optional component inside Windows. This means that you have to access the “Enable or disable Windows features” dialog box to activate it, which requires you to restart your machine. The actual binaries that make up the logic of WSL in this optional component are part of the Windows image and are maintained and updated as part of Windows itself.

This change ensures that these binaries are no longer part of the Windows image, but rather part of an application that you install from the Store. This disassociates WSL from your Windows version, allowing you to update through the Microsoft Store instead. So now, once new features such as GUI application support, GPU computation, and Linux file system drive mounting are developed, tested, and released, you will have immediate access to them at your machine without needing to update your entire Windows operating system, or go to the Preview versions of Windows Insider.

Some new features can be found in this Preview, including:

Can I install WSL from the Microsoft Store if I already have WSL installed?

Can I use WSL 1 distributions with the Store version?

What are WSL’s future plans in the Windows * image?

Our goals are to make WSL in the Microsoft Store the best way to install and use WSL, because you will be able to get the latest updates as quickly as possible through this route, and in the long term, we would like to move WSL users to use the store version. However, in Windows 11 we still support the Windows nested version of WSL as we continue to develop WSL in the Store. This means that if you are using the nested version you are still supported but also that the optional WSL component is still present in Windows 11. We will be data driven and will use your comments from this Preview to help us inform us. our future decisions with WSL in the Windows image in future releases.

How to uninstall WSL from Microsoft Store and revert to Windows version?

If WSL from Microsoft Store is installed and you want to revert to the Windows version, you can follow these steps:

After completing these steps, you will be back to using the Windows version of WSL.

To install and use WSL from the Store, users must be running at least Windows 11 build 22000. The optional virtual machine platform component must also be enabled. If these conditions are met, users can go to the WSL Store page and click Install to install WSL, then install a supported Linux distribution of their choice.

Users who have installed the Windows version of WSL can still install the WSL Preview from the Store, as both can run simultaneously (however, the Store version will always take priority). Users will be able to use WSL 1 distributions with the Preview Store as long as the optional WSL component is enabled. Additionally, users will have the option to uninstall WSL from Store and revert to Windows version.

What do you think of this strategy?