Microsoft’s Teams communications and collaboration platform surpassed 270 million monthly active users in the quarter ending December, continuing to add users but at a much slower pace than in the early months of the pandemic.

Satya Nadella, the CEO of Microsoft, revealed this stat in conjunction with the company’s quarterly results. This number represents an increase of 20 million monthly active users from the 250 million reported by Microsoft six months ago, in July 2021, the month in which Microsoft told investors: Teams continues to fuel hybrid working, with nearly 250 million monthly active users benefiting from improved collaboration features, extensibility and deeper integration with Dynamics 365.

At the end of last year, Microsoft shared documents with the SEC, the US federal regulator and supervisor of the financial markets, where it indicated to investors that the growth of Teams could slow. For some observers, this is also the reason why the company decided at that time to change its presentation of Teams usage figures (in particular by moving from daily active users to monthly active users).

Teams competes with services such as Slack, acquired by Salesforce last year for $27.7 billion, and the widely used Zoom video conferencing service. Microsoft launched a standalone version of Teams for small businesses in December, separate from other Office apps and services, posing a more direct threat to Zoom.

Nadella said on the earnings call that monthly usage of third-party apps and custom solutions in Teams has increased tenfold over the past two years, proof of how companies are using Teams in a way that is at heart of their work. He cited new and updated Teams apps from Atlassian, monday.com, SAP and Workday.

A strategy to incentivize usage inside and outside the corporate sphere

To help expand Teams beyond its established commercial base, Microsoft has strategically chosen to add more consumer-oriented features to its product.

Along these lines, Microsoft set out to roll out Teams integration for a group of Insiders on Windows 11 last July. The integration of Microsoft Teams into Windows 11 was one of the major feature announcements for the operating system. Once complete, it should allow you to communicate/collaborate with friends, family, and co-workers right from the taskbar. The integration works through the combination of two elements: a graphical chat interface integrated into the taskbar and a new lightweight Teams client powered by WebView2. The latter allows you to integrate web technologies (HTML, CSS and JavaScript) into your native applications.

Here are some points highlighted by the company:

In December, Microsoft rolled out end-to-end encryption for Teams calls after a few months of testing. For calls to be protected, both parties must have end-to-end encryption enabled. And if you’re wondering why you might want to disable E2EE in Microsoft Teams, it’s because enabling the security feature means some other calling features won’t work. Thus, it will no longer be possible to record conversations and take advantage of automatic subtitles and transcription. It will also do without call transfer, call waiting and merging, transfer to another device and, of course, the possibility of adding additional participants to transform the call into a group call. For now, end-to-end encryption is available in the macOS and Windows desktop client versions of Microsoft Teams. Even when system administrators have made the feature available to users, it is still up to individuals to enable it for their calls.

The editor did not want to miss the metaverse train: Microsoft has announced its intention to create an immersive 3D platform called Mesh for Teams for virtual meetings. As the name suggests, Mesh for Teams builds on the company’s existing Teams collaboration platform and implements the mixed reality features of Microsoft Mesh. Announced earlier in 2021, Mesh is a platform for virtual meetings and other collaborative gatherings in mixed reality (a catch-all term for virtual reality, augmented reality, or any combination of the two) using a variety of devices like products the company’s HoloLens and Windows Mixed Reality headsets, among others. Users would have persistent avatars that accurately reflect their body language and facial expressions and could walk around a virtual workplace.

Mesh for Teams would be used to invite employees to log into 3D or 2D collaborative workspaces. In Microsoft’s case though, it doesn’t seem limited to any particular device. Sitting around a virtual conference table, workers could do things that aren’t possible in the real world. For example, a presenter might see her notes in a 3D space near a virtual whiteboard while those viewing the presentation only see what she writes on the board.

The service will come with predefined workspaces, but businesses will be able to create and customize their own, just like employees can create avatars. None of this will initially require a VR headset; workers could log in with smartphones and laptops and see the spaces on their screens. 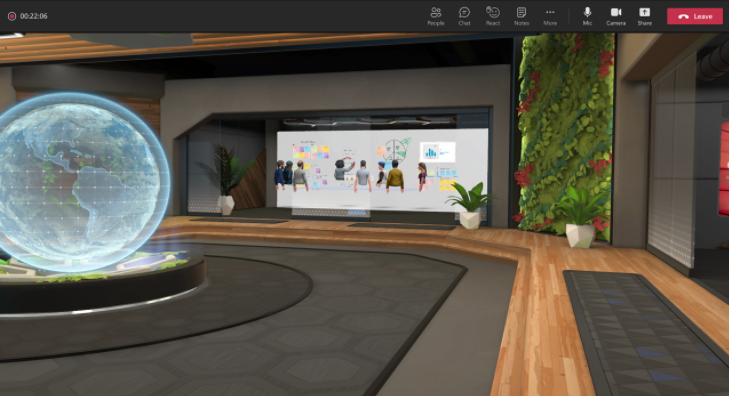 According to Microsoft’s blog post on the subject, the platform will initially only animate avatar faces based on audio cues when users speak. However, Microsoft plans to bring these avatars basic mirroring of users’ facial expressions through the use of webcams.

Microsoft explains that the development of Mesh for Teams is circumstantial; forced by the pandemic, human interactions were modified for a certain period. Long enough for new trends to emerge:

More than a year and a half after the start of a global pandemic that forced workers around the world to abandon their desks and learn to collaborate online, Microsoft productivity experts have observed two trends: remote workers are much more efficient than most business leaders ever imagined, and they’re missing out. They miss the hallway moments, the kitchen catch-ups and the chance encounters. They miss the body language on the other side of the conference room table that says things that can’t be said.

Communication with a user outside your company

A few days ago, Microsoft announced the relaxation of the functioning of Teams in order to authorize communications with external third parties, even if they only have a personal user account.

This new feature, currently being rolled out, is completely transparent to users. To take advantage of this, simply initiate a new conversation in Teams, then enter the phone number or email address of the external third party to start an external search. Once contacted, Teams will show (external) next to their name.

You can then chat with this person as you usually do with your colleagues, without this changing anything in Teams. The conversation with this external user is directly integrated into the dedicated tab, in the middle of the other open discussions.

When you invite a contact who doesn’t have a Teams account to join a conversation, Microsoft will automatically send them an SMS or email inviting them to create a personal account on Teams.
Sources : Letter from Microsoft Chairman and CEO to Investors, Frank X. Shaw (responsable communications de Microsoft)

What collaboration tool do you use in your business?

Have you ever used Teams? If yes, what do you think?

What do you think of the strategies deployed by Microsoft to gain users?

French people living abroad, who have not been vaccinated, no longer need a compelling reason to return to the country