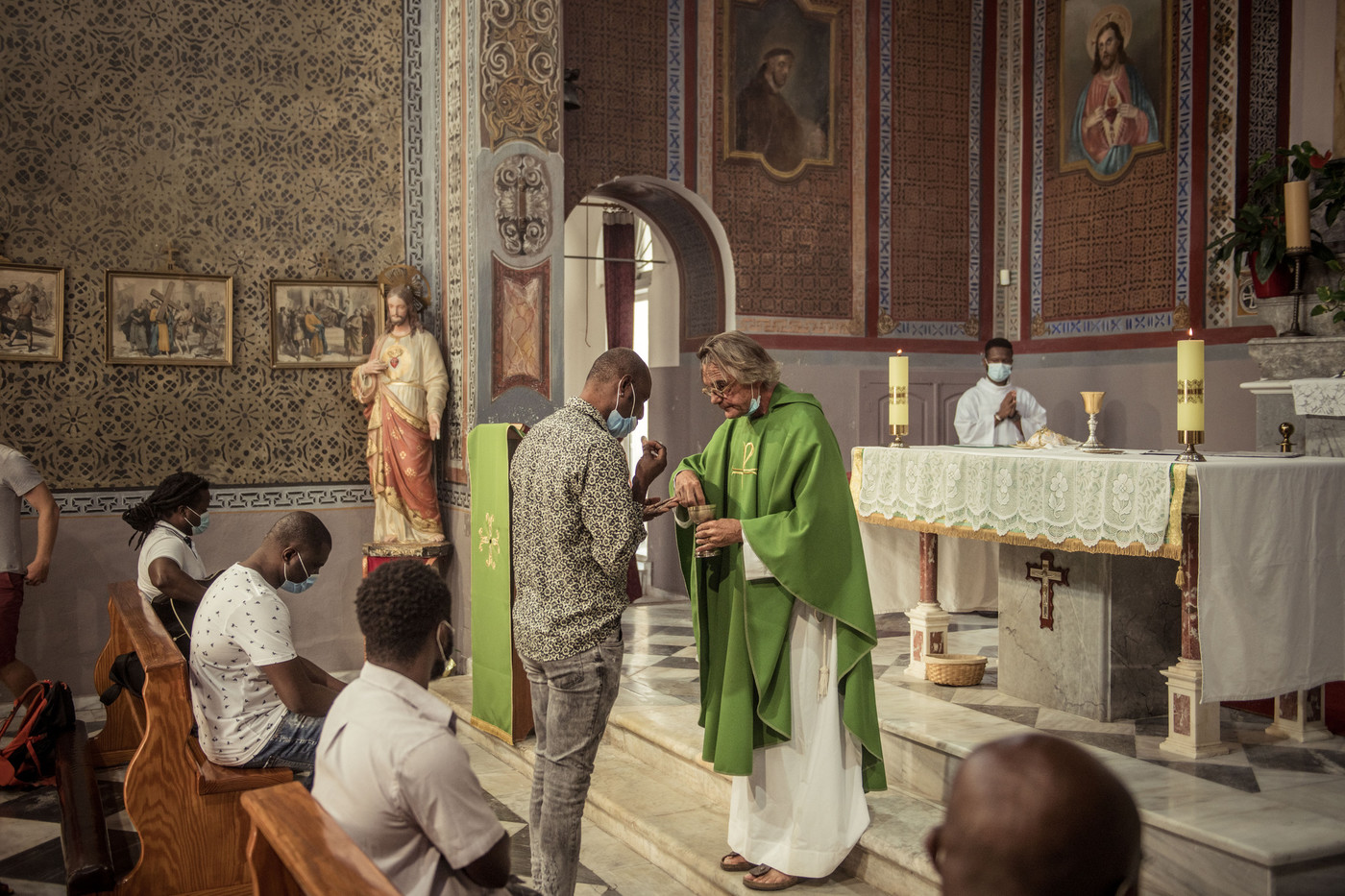 “When I give Communion and look them in the eye, I see so many things: so much helplessness and confusion, so much hope and confidence”, says Father Martin Schneeberger. This 63-year-old former hospital chaplain in Amsterdam now works in Lesvos and tears come to his eyes. “The faith of these migrants strengthens mine. “

The small Roman Catholic church, built in 1843 by French Franciscans, is almost nowhere to be found, hidden behind shops and apartments in Mytilene, the main town of this island where the population is of the Greek Orthodox faith.

It has a hundred parishioners, but only a dozen are active in the parish. A Greek priest, “Father Leon”, lives on another island and can only come by boat sometimes once a week to say mass.

Martin Schneeberger has known the island for many years, but decided to settle there indefinitely in January 2020. He then went to Moria camp every day, where there were 22,000 asylum seekers. There he listened to the stories, heard about the miserable living conditions, until the camp was devastated by fire on the night of September 8-9.

“You cannot know what to bless on Sunday after Mass: water, oil, salt, rosaries. When I ask why I bless the oil, they say to me: “The blessed oil gives more peace” », says the Dutch priest.

→ ANALYSIS. Christian organizations call on the EU for solidarity with migrants

Since 2015, the life of English teacher Len Meachim, who married a Greek and has lived on the island for years, has also changed dramatically. “Before, in my spare time, I used to like jogging, fishing or swimming. But when I saw how these refugees literally came out of the water, I couldn’t stand by and do nothing ”, he recalls.

During this great migratory wave, he stayed on the beach for months, day after day, with other parishioners, to welcome refugees, before the NGOs arrived in the south of the island. “I remember the first glass of water I gave to a child, and the reaction of his parents, he said. But it’s not just about food, water and clothing. We were there because it makes a difference when there is someone to greet you. “

A church as a haven of peace

The most vulnerable were brought to the camps by parishioners with their own cars, although this was officially prohibited. From the beginning, the parish actively cooperated with Siniparxi, an association of volunteer islanders that also helps refugees. Len Meachim quickly began teaching English, while a woman in the ward taught Greek lessons.

→ IN IMAGES. In the devastated Moria migrant camp

“When the first NGOs arrived, they saw us as amateurs, he regrets. It’s like we don’t need us anymore. Sometimes we felt we were no longer welcome. “

The small community started opening its church to refugees in 2015 – to come and pray or light a candle. Muslims also came regularly – “To be close to God, as they said”. For these migrants coming largely from the Middle East and Africa, the church was seen as a haven of peace and security. Then was asked a “Religious service”.

The bishop, who is on another island, actively supports the small parish. He named Len an unpaid “subdeacon,” a post officially abolished in 1972, but which now gives the former English teacher some visibility in the Greek Orthodox context. He takes the lead in prayer services and is also authorized to give Communion.

“We need Bibles, especially in French. And rosaries ”, explains Len Meachim. “Bibles are going fast! Some refugees have been here for years, especially single men. Others leave quickly, especially women who are granted asylum more easily. “ Discreetly, after mass, he puts a two euro coin in someone’s hand here and there.

That Sunday, there is a mass in French and in English at 11 a.m. Due to the precautionary measures taken because of the coronavirus epidemic, only twenty people are allowed to be present in the church. Others are sitting outside in the courtyard, under the scorching sun, where there is room for ten more people. Before the pandemic, more than a hundred refugees sometimes participated in religious service.

Miles to go to mass

Some of the faithful live in the city, others have walked ten kilometers from the new camp hastily made after the fire. “At the beginning, they could come from the camp by bus because there was a line which passed and we distributed them tickets”, recalls Len Meachim. When it stopped because of the coronavirus, “We hired a small bus to pick up the refugees.”

Then the church had to close. Later, only groups of ten visitors were allowed to be received. The parishioners then organized several religious services and they came in groups of ten. And now twenty. Some refugees have been here for two years, Len Meachim indignantly. “When they arrive, they are already traumatized but, stuck for a long time on the island, they are even more so. These people often have many talents that Europe could well use. I meet nurses among them, doctors… We create bitterness in some of them. “

“We have become a different type of believer”

“We have become a different type of believer”, connects the “sub-deacon”, who remains silent for a moment. “It’s hard for me to talk about it. All these encounters have given me even more than I could give. What we are doing is normal, only we are doing it in an abnormal situation. I am touched that these people who have suffered so much at home and on the road must now live with this inhuman situation in Moria. And yet they come to church and sing with so much hope and joy! “ An African choir was formed, which sang with heart and enthusiasm. But he is no longer allowed to meet because of health precautionary measures.

That Sunday, during mass, the refugees sing the song of thanksgiving How not to praise you, Lord. The Dutch priest greeted them with emotion, and went to the exit of the church to be able to do the same from the threshold with the people present in the small square of the church. “Words fail you in such a situation”, he whispers.

———
Catholics, a small minority in Greece

Catholicism has around 200,000 faithful in Greece, mostly immigrants, but there are around 50,000 ethnic Greeks among them. Most Greek Catholics belong to the Church of the Latin Rite, but a small number are members of the Hellenic Greek Catholic Church, of the Byzantine Rite.

The vast majority of the country’s inhabitants belong to the Greek Orthodox Church. Historically linked to the State, it benefits from special conditions. The members of the clergy thus come under a statute assimilating them to civil servants.

In 2018, then Prime Minister Alexis Tsipras tried to change this situation, through a constitutional review. Openly claiming his atheism, he found common ground in November 2018 with Bishop Ieronymos, Archbishop of Athens and all of Greece. But the Holy Synod of the Orthodox Church of Greece had not given its consent.