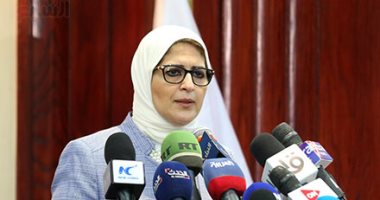 Dr. Hala Zayed, Minister of Health and Population, presented, during today’s government meeting, chaired by Prime Minister Mostafa Madbouly, the latest developments in the infection rates of the Corona virus at the level of the Republic and at the global level, the efforts of citizens to receive anti-viral vaccines, and the position of their manufacture locally.

The Minister touched on the results of a French study, the largest of its kind so far, which was conducted on 22.6 million people over the age of 50, to indicate that vaccination reduces the risk of death or hospitalization as a result of the Corona virus by 90%, as the study showed that vaccines of any kind reduced the risk of death or hospitalization due to the Corona virus by 90%. It prevented the worst effects of the most widespread virus strain, the Delta.

Zayed also referred to what the World Health Organization report stated that training medical teams was one of the main means that led to positive behavioral change during the pandemic around the world, pointing out in this regard that Egypt has trained nearly 100,000 medical teams since January 2021 through the WHO Education Platform.

The Minister pointed out that more than 125 countries are currently conducting periodic monitoring of respiratory diseases through the Global Influenza Surveillance and Response System (GISRS), stressing that Egypt is one of the countries that use this global epidemiological surveillance system, and integrate it with the Corona virus surveillance system, and Egypt also owns A number of laboratories with international laboratory capabilities (EQA), which number about 100 laboratories.

The Minister also touched on the British government’s recent decision to approve vaccine certificates against the Corona virus for travelers from Egypt to the United Kingdom, according to controls that included receiving two doses of AstraZeneca, Pfizer or Moderna vaccine, and one dose of Johnson & Johnson vaccine, and that 14 days have passed since receiving on the final dose.

And the minister pointed out that the procedures included emphasizing that arrivals from Egypt are treated as residents of the United Kingdom who have been fully vaccinated, provided that they do not visit one of the countries listed on the red list for travel, and also included the need to adhere to the PCR test during or before the second day to arrive via The official website of the British government and at its expense, as for those coming from Egypt who do not hold certificates to receive the vaccine, they will have to commit to self-isolation for 10 days after arrival, with 3 PCR tests performed, the first within 72 hours before arrival, and the second and third during the second and eighth days of Access.

The Minister of Health and Population confirmed that 22 governorates were covered within the framework of the “Together We Reassure” campaign since its launch on September 5 until October 12, 2021, and 250,245 citizens were registered on the ministry’s website to receive the Corona virus vaccine through the campaign, and awareness was provided to more of 280,000 citizens.