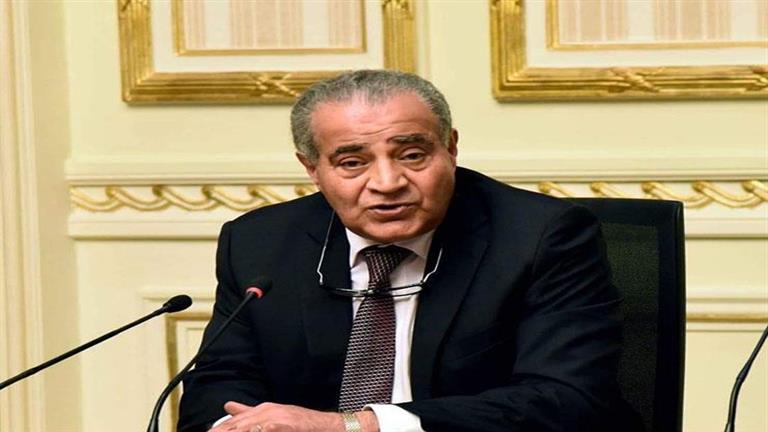 The Minister of Supply and Internal Trade, Dr. Ali Al-Moselhi, confirmed that President Abdel Fattah Al-Sisi’s directives before the Corona pandemic crisis, to raise the reserve of strategic commodities, especially wheat, to 6 months instead of 3 months, and to provide the necessary financial funds for this, contributed to facing the challenges that resulted from the Corona pandemic and the crisis. Russian – Ukrainian.

And the Minister of Supply said – in an interview with the Middle East News Agency, that an amount of 1.8 billion dollars was provided, before the launch of the economic reform and flotation program with the aim of supporting the strategic reserve of basic commodities in the country, adding, “When the Corona pandemic appeared, it affected the logistics of operations. Transport, boats and planes that stopped within a month from the beginning of the pandemic,” stressing that if we had not had a reserve, thanks to President Sisi’s directives, our position would have been difficult at that period due to the Corona crisis.

Al-Moselhi said: “Since the beginning of the Russian-Ukrainian crisis, we have been buying a ton of wheat at $340, and during the first two weeks of the crisis its price ranged between $520 and $540 per ton,” noting that thanks to the presence of a strategic reserve and the presence of good silos in the country, which were The wall and a good insulator contributed to the country’s ability to receive shocks, whether with regard to wheat or oils, and we also provided the country’s stockpile with tank capacities and were not affected by the provision of these goods to citizens.

With regard to the repercussions of the economic crisis and the state’s support for the neediest groups, the Minister of Supply said that the world is facing a major economic crisis that is more difficult than the crisis the world witnessed during World War II, explaining that the inflation that hit the world is called imported inflation, while natural inflation is the presence of Great financial liquidity and there are no commodities in the markets, but this inflation came as a result of the high cost of raw materials that are used in the manufacture of some basic commodities.

“All production inputs have increased their prices significantly, such as energy, wheat and corn,” he said, noting that oils and sugar also have a major crisis due to the fact that some countries, led by the United States of America, use vegetable oils to convert them into biodiesel for use as clean energy, and use sugar and convert it to ethanol and use it as well. as clean energy.

He pointed out that Ukraine was exporting 30% of the world’s oil production, but the Russian-Ukrainian crisis stopped that as well, and food crises began to appear worldwide.

He stressed that all these factors affected all segments of society, whether the rich, middle or low-income classes, so the political leadership and the government decided to intervene to support these groups.

He explained that this support was launched in two main axes, namely the axis of “Solidarity and Dignity”, where an increase of 500,000 new families receiving cash support was approved, in addition to the support of another 400,000 families from some NGOs and civil society organizations.

He added that the second axis is represented in the ration cards, where some groups were identified in cooperation with the administrative control by creating an economic model and a social model to know the most needy groups and included all groups benefiting from the solidarity, dignity and social security pension and everyone whose pension is less than 2500 pounds and everyone who said His wages are about 2,700 pounds, the widows, the unemployed, and the temporary employment lists that were prepared at the time of Corona, and we found that there are about 8.1 million families in need of support, with 36 million beneficiaries.

The Minister of Supply explained that the average increase is about 50% on subsidies for food card holders for the most needy families, pointing out that they represent nearly 50% of card holders.

He said that the citizen beneficiary of the subsidy can obtain products of oil, sugar and others at the value of the support he received, stressing that this decision had a great impact on citizens, pointing out that this support will continue until next February.

In response to a question about the extent to which the Egyptian reserve of strategic goods has been affected in the wake of the Corona pandemic and the Russian-Ukrainian crisis, the Minister of Supply confirmed that Egypt has a reserve of wheat for 6.6 months, stressing that this did not happen at any time, pointing out that the target is for the reserve to be 6. Months.

With regard to oil reserves, he said that Egypt has a reserve of oil, “soybean and sunflower”, sufficient for a period of 5.6 months, pointing out that oil storage capacities have been increased.

Regarding the rice reserve, the Minister of Supply said, “We have 2.3 months of old reserves,” pointing out that the rice harvest season has begun, and that the cultivated area reaches 1.4 million acres, producing between 5.5 and 6 million tons of barley, and we target 1.5 million tons of barley in length. year until we have reserves at the Ministry of Supply, stressing that Egypt has self-sufficiency in rice.

As for poultry, he explained that Egypt has a 7-month reserve of frozen poultry and is self-sufficient in live poultry.

Regarding meat, the minister explained that the reserve for frozen meat is 4 months, and as for live meat, he referred to a contract with Sudan for a period of two years, of which 1.5 years remain, pointing out that production of live meat continues, as it comes from Sudan and then to Abu Simbel or the south of the valley. And it remains for 45 days under veterinary quarantine, then it is transferred to the slaughterhouses and slaughtered, and then transported in refrigerated cars to distribution outlets in the various governorates of the Republic, stressing that this cooperation with Sudan is very successful.

He pointed out that the main reason for the high cost of meat worldwide is the high prices of feed, explaining that the prices of meat in the ministry’s outlets amount to 145 pounds per kilo, 115 pounds for fresh Sudanese meat, and 85 pounds for frozen meat.

In response to a question about the importance of the national project for silos, the Minister of Supply stressed that this project brought about a transformation in the concept of food security in Egypt, noting that wheat was stored through the “barn”, and until 2014 the storage capacity was only 1.2 million tons. .

The Minister of Supply explained that the annual consumption of wheat is 9 million tons, and the waste from storage ranged between 10% to 25% annually, which is a large percentage. Thousands of pounds, a loss of 7 billion pounds annually.

He stressed that today we have the ability to store 3.5 million tons in silos, whose construction cost amounted to 7.4 billion pounds (approximately the estimated waste for one year only), explaining that the silo maintains the quality of the commodity, as the quality of wheat supplied to bakeries is equal in quality both at the beginning of the season. or its end.

In response to a question about the ministry’s efforts to tighten control over markets, Al-Moselhi said: “We cannot neglect the role of more than one party, including first the supply investigations, secondly, the supply control, and finally the consumer protection agency, explaining that these authorities have a direct role, in Tightening control over the markets.

He added, “We are working on restructuring the internal trade system, establishing logistical zones and specialized commercial centers, as well as having strategic stores in organized markets.”

He pointed out that there is no shortage or crisis in supply commodities during the seasons and holidays, thanks to the state providing large quantities in the markets and it includes all commodities, adding that “the infrastructure of internal trade and market organization, in addition to increasing supply and then monitoring contribute to controlling markets.”

The Minister of Supply warned against storing any food commodity except in stores approved by the Food Safety Authority, otherwise it will be considered an unknown commodity and will be confiscated immediately.

On the establishment of factories for the production of oils in Egypt, the Minister of Supply explained that based on the directives of President Abdel Fattah El-Sisi, a plan was drawn up to develop the vegetable oil industry in Egypt and a study was carried out and needs were identified, pointing out that a conference was held to attract investments in this field to support and stimulate investment in the establishment of Oil factories in Egypt, adding that the conference discussed the opportunities and needs of Egypt from the oil industry.

He said that the conference was held with the aim of finding serious investors to partner with the government in the production of oils, pointing out that Egypt does not have oil seeds, and that in the past two million feddans were cultivated with the cotton crop and at that time there was self-sufficiency in oil, and with the decline of cotton, the trend was taken To alternative oilseeds such as soybean and sunflower.

The Minister of Supply explained that a distinction must be made between the quantity of imported oil and the quantity of imported seeds, noting that 30% of vegetable oils in Egypt come as a result of importing oilseeds such as soybean and sunflower, and the remaining 70% is divided into 7% of seeds produced in Egypt, and 63% of oils Imported raw materials, mostly palm oils, which are used in the manufacture of vegetable ghee.

He pointed out that there are two directions to increase production, the first is an attempt to increase contract plantings with farmers to increase the cultivated area of ​​soybeans, explaining that the soybean planting season is the same season for rice cultivation, which serves the water balance, by reducing the cultivation of 200,000 acres planted with rice and is Cultivation of soybean crops, which saves water and increases oil production at the same time.

He explained that the other direction is to conclude agreements with countries, especially with Sudan, to grow sunflowers and soybeans there, then the crop will be obtained and pressed in Egypt, stressing that Egypt possesses juicers that enable it to achieve self-sufficiency in the event of the presence of oilseeds.

He said that in coordination with the National Service, the Holding Company for Food Industries and investors, three complexes will be established to raise the level of oil production in Egypt and provide feed and by-products.

With regard to sugar self-sufficiency, the minister added that Egypt produces 90% of its sugar needs, and all that was imported was only about 400,000 tons, noting that by completing the Canal Factory located in western Minya, which will have a capacity of 600,000 tons, we will then be able to export sugar.

With regard to the concept of intellectual property, the Minister of Supply stressed that this concept is no longer limited to the protection and preservation of the rights of the author, creator and innovator only, but has become an integral part of sustainable economic development, which prompted Egypt to launch a national strategy for intellectual property to provide protection and encouragement to Egyptian creators and innovators. and get to know them.

He explained that there are four axes for this strategy, namely the institutional framework, the legislative framework, the economic framework and societal awareness, pointing out that Egypt has a long history in protecting intellectual property and that the strategy will serve this field in Egypt.

While cheering on their son at a baseball game, Shakira and Pique sit on separate benches | art stars