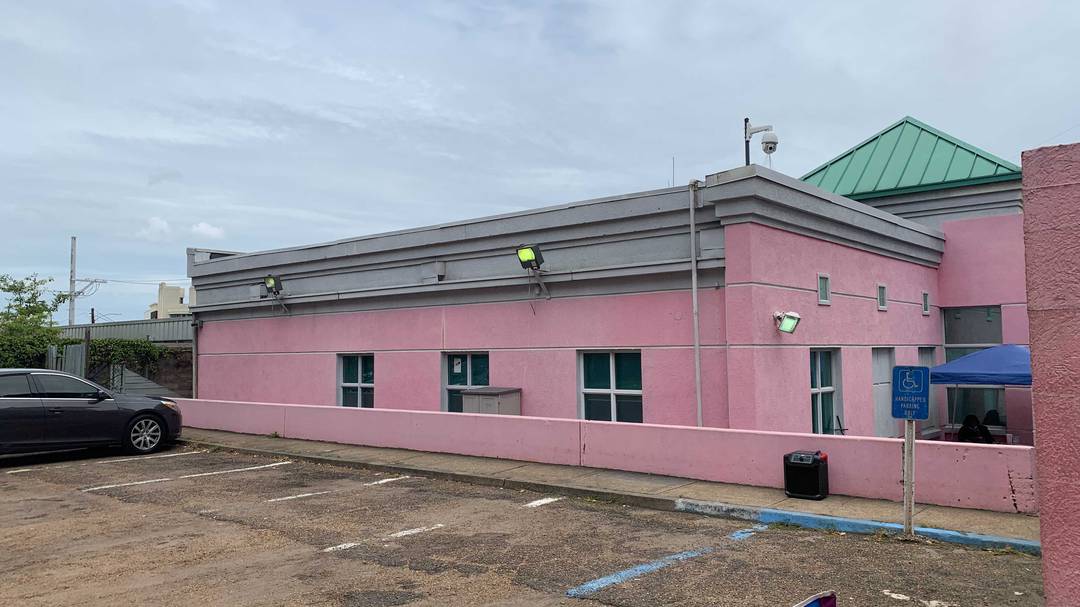 Jackson. They know Pam well here. The middle-aged woman regularly stands in front of the pink house in Jackson, Mississippi, USA. Whenever a car pulls into the abortion clinic’s premises, Pam rushes to the vehicle armed with brochures. She then exclaims that there are other options. A man clarifies that Pam doesn’t work for the Pink House – that’s the name of the clinic. Once the women have reached the small clinic premises, Pam follows them from the other side of the fence to the entrance. She calls over the barrier – a black foil blocks the view. A volunteer from the clinic turns the music on.

The Pink House is the only abortion clinic in the state in the southern United States. But that’s not the only thing that makes them special. The fights outside the clinic will soon take place in the US Supreme Court. There, the Pink House is at the center of a case that can massively restrict abortion rights everywhere in America. Because the Supreme Court is reviewing a Mississippi law that bans almost all abortions after the 15th week of pregnancy. The court set the hearing on Monday for December 1st.

According to a landmark ruling from 1973, abortions are allowed in the USA until the fetus is viable – today until about the 24th week of pregnancy. The decision is considered a milestone. This case law, known as Roe v. Wade knows, the Supreme Court could change it now. Should he decide that Mississippi law is constitutional, Roe v. Calf lifted.

The controversy over the right to abortion has preoccupied courts and society in the United States for decades. It’s not the first time Roe v. Wade threatens to tip over – but now the danger seems greater than seldom before. Because under the former US President Donald Trump, the Supreme Court has become much more conservative.

“We’re angry and hate it, but we’re not surprised,” says Derenda Hancock. The blonde woman is wearing a colorful vest and is standing in front of the Pink House in Jackson. She is one of the founders of a group that shields pregnant women from anti-abortionists in front of the clinic. What Trump has been doing at the national level has long been happening at the local level, she says. “And we’re not surprised at Texas.”

A new law there has just caused violent outrage: It prohibits almost all abortions once the fetus’s heartbeat has been determined. Many women do not know at this point that they are pregnant. The Supreme Court had dismissed an urgent motion against the law. It is true that he did not judge the matter itself. Many fear, however, that the decision gives an idea of ​​how the court will decide in the Mississippi case.

Hancock is standing in front of the Pink House with a handful of volunteers on this sultry September day. It’s quiet today, she says. Only Pam is there. It is everyday occurrence that anti-abortionists harass women in front of the clinic. In the early morning they would come with loudspeakers. “I think they’re all crazy, but they’re a bit more extreme than the afternoon ones,” says Hancock. Another volunteer says that the opponents also positioned themselves a little further away in front of the Pink House and pretended to be clinic staff. They would then direct the pregnant women to another clinic that doesn’t do abortions at all.

Hancock is sure that most women would not be deterred. “We’re the last remaining abortion clinic in Mississippi. Where should they drive people to? ”It annoys them when people say that women can have abortions in a country where it is easier. Some women couldn’t even afford to go to Jackson, she complains.

Pam stands a little apart from the volunteers and keeps a close eye on the rolling cars. If one turns towards the clinic, your moment has come. “Why do you think you are right?” Asks one of the volunteers. She has God on her side, says Pam. The petite woman willingly gives information. “I believe that life is a precious gift from God,” she says. She believes pregnant women don’t know any better – they might be pressured to have an abortion by their boyfriend or family. Pam believes her protest in front of the clinic has already discouraged women from having an abortion. Most women wouldn’t even hear them, says a volunteer.

Jarvis Dortch is the head of the civil rights organization ACLU Mississippi. The organization has an office in the abandoned downtown Jackson area and is concerned about the Supreme Court decision, expected in 2022. He fears the court’s ruling could result in each state passing its own abortion laws. “That would probably be the worst result,” he says.

In the event that the landmark judgment Roe v. Wade tips, some states have already prepared laws that could come into force immediately. It is above all the ultra-conservative states in the South and Midwest who want to ban abortion completely or almost completely. But why is it precisely this topic that keeps getting people excited? “Basically, it’s about power,” says Dortch. “You tell a woman how to live her life.”