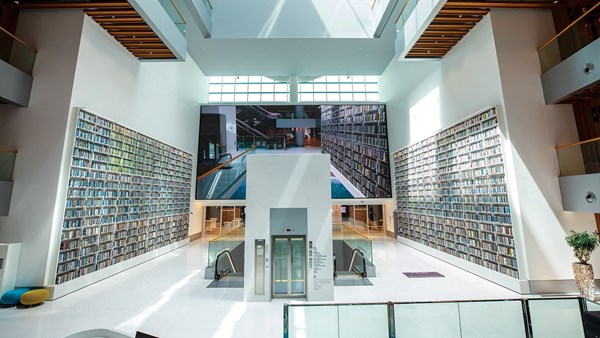 The inauguration of His Highness Sheikh Mohammed bin Rashid Al Maktoum, Vice President and Prime Minister of the UAE and Ruler of Dubai, “may God protect him”, of the “Mohammed bin Rashid Library” and its opening in the “Al Jaddaf” area in Dubai, is an exceptional opportunity to enrich the basic essence of the presence of public libraries in the country The Emirates, and activating its societal, cultural, social and developmental role, in addition to being a knowledge platform for youth creativity in the region and the world, by providing the library with all technological capabilities and techniques, to make a leap of knowledge in terms of research and scientific productions, in order to strengthen partnerships with major national libraries in the world, Supporting the issue of consolidating historical references, and rooting writing and documentation methods on local and Arab spaces, through the possibility of strengthening historical approaches and drawing new visions for the march of civilizational progress for the region as a whole, in parallel with the main roles played by major global offices at the level of production of future knowledge and ways to confront its accelerating challenges such as The strategic efforts of the Library of Congress, the robustness of the archives of the British Library in London, the German National Library, and others.

It is a continuous process of realizing the wave of transformations in how information is formed through the “event” and its development in part through the use of thought, which presents societies with unique perceptions, which contribute to clarifying the features of the identity of each society, and the mechanism for the development of its openness with various societal cultures, and making it truly present in the human experience, which By its nature, it mainly calls for sustainable interactive platforms in the fields of paper and digital publishing, according to international standards. The latter represents a qualitative goal for the Mohammed bin Rashid Library, announced by those in charge of the library, within considerations of the urgent need to diversify cultural structures, and expand the concept of reading, especially that the attendance of more than one million And one hundred thousand paper and digital books in Arabic and foreign languages, more than 6 million scientific theses, 13,000 articles, and more than 5,000 historical paper and electronic periodicals as an archive for 325 years. Age groups, specialties and interests, to start the creative production cycle, and to form a stream of knowledge that the Mohammed bin Rashid Library provides as a renewable database for public institutions and individuals, and is considered a general indicator, which contributes to Establishing pathways that support the growth of society in the UAE.

Dialog language
And the nine libraries in the Mohammed bin Rashid Library, carry themselves an independent system in the formation of mini-communities, which have interest in every field, but the library practically does not separate in its main activity, which is providing information on the importance of building an implicit dialogue language, which the recipient senses in the internal architecture of the library and designed With an interface that includes a group of arrayed books, which takes us directly to what more than 29,000 titles can offer, including the public library, and how it is linked, for example, to the “Youth Library”, which contains “Naruto” books, the famous group of Japanese “manga”, And here is a simplified question about what the human imagination can do, during its unlimited reception of knowledge, and start asking questions that in their external level are almost intellectually insignificant. The Atlas of Cosmic Harmony by Andreas Cellarius, and it is the only celestial atlas published in the golden age of Dutch cartography during the sixteenth and seventeenth centuries AD, as part of the “Library Relics” collection specialized in intellectual works and literature world, some of which date back to the thirteenth century.

rare collections
The “Library Relics” collection also presents the first edition 1868-1869 of the immortal literary piece “War and Peace” by its creator Leo Tolstoy, which brings us back to the discussion about the literary product and its acquisition within the rare collections, as it was originally a piece of art, which is figuratively expressed by a decorated treatise. Drawings in the Persian language dealing with the subject of horses and equestrianism through the book “Fares Namah, a Message in the Horses”, the Mughal Sultanate of India, the seventeenth century AD, and led us to travel with complete comfort towards the “Library of Arts and Media”, which contains more than 15,000 printed and paper works, and media A variety of art, engineering, design, fashion and theatrical arts, and the question about 73,000 pieces of music, which will be available to visitors in the coming period, and the future of libraries and musical houses, in light of the library containing scientific and discussion references for an integrated group dealing with the art of Umm Kulthum, “Planet of the East.” Alongside the creations of the Arab world and international innovations in music, the Mohammed bin Rashid Library will celebrate documenting the aesthetic and emotional sense of music and instruments that formed the entities of rhythms in the Emirates and the Gulf? We are still here in the Emirates looking for the effect of the voice of the raptor in its ability to make us able to absorb the endless narratives that come to us with the Gulf Sea, as did the artist Cao Jun, through his blending of classical Chinese art and abstract art, as his book is displayed in the “Library of Arts” and Media” which are paintings of early wild animals, to its landscapes and modern explorations of space.

Shared moment
Despite the curiosity that leads readers to the “Library of Maps and Atlases” to see the well-known copy of the book “The ATLAS OF MARS,” which provides mapping of the geography and geology of Mars, what the “Information Center Library” offers in terms of providing a safe environment for people of determination, opens up new horizons. Direct human language based on common sense, in cognitive spaces, the idea of ​​which is the overlap and harmony in the possibility of visitors to share a live experience that enables them to use their fingers and pass them on printed books in the “Braille” system, which is available for the blind to be able to read, and thus the whole community is evoked and integrated In this participatory moment, in addition to the “Information Center Library”, spatially provides a special space for children and adults with difficulties in sensory processing through lighting options to improve mood, a personal space that accommodates an adult and a child, or even three children, including children with autism And those who often prefer to sit in quiet areas, this exceptional and aesthetic dimension in the visitor’s experience to the Mohammed bin Rashid Library, represents a societal solidarity through equal sharing in public spaces Everyone has the right to knowledge, as well as the space available to make the most of the information, and perhaps we should meditate a little bit that the societal advantage of the library, is that it will add an element of improving and strengthening the emotional memory of the visitor, and it is in the general human sciences, it is a practice that has a stand-alone cognitive nature that differs from what it includes The intellectual experience of people, and the success of any cognitive space lies in its ability to achieve relative harmony between feeling and idea.

Relaxation and harmony
The design of the library of Mohammed bin Rashid in the form of “nomads”, which is the wooden stand used to carry books, especially copies of the Holy Qur’an, has occupied many people interested in the architectural sectors, which is how to stimulate the extension of social and cultural heritage, and make the individual an active participant in the development of the general visual language, with lighting The natural sun interfering in the building, the public being able to discover very small details, including noting the reflections and shadows on the small basins that surround the library building from the outside and the inside, where some of the library designs in the Mohammed bin Rashid Library witness an amazing overlap of water, suggesting to the viewer that it is the moment of the library’s watering and books, which guides it a torrent of harmony with the external environment surrounding the trees and fountains, which in turn interact with the side lakes of the building, by dropping their leaves in an autumnal succession into those still waters with their endless flow.

A woman biting a poisonous flower took a photo and was sent to the doctor the next day. “It looks like an oleander”!Net Stunned: See how many years Zhen Huan lived | ETtoday Mainland News | ETtoday News Cloud

yesterday and today of a supermodel