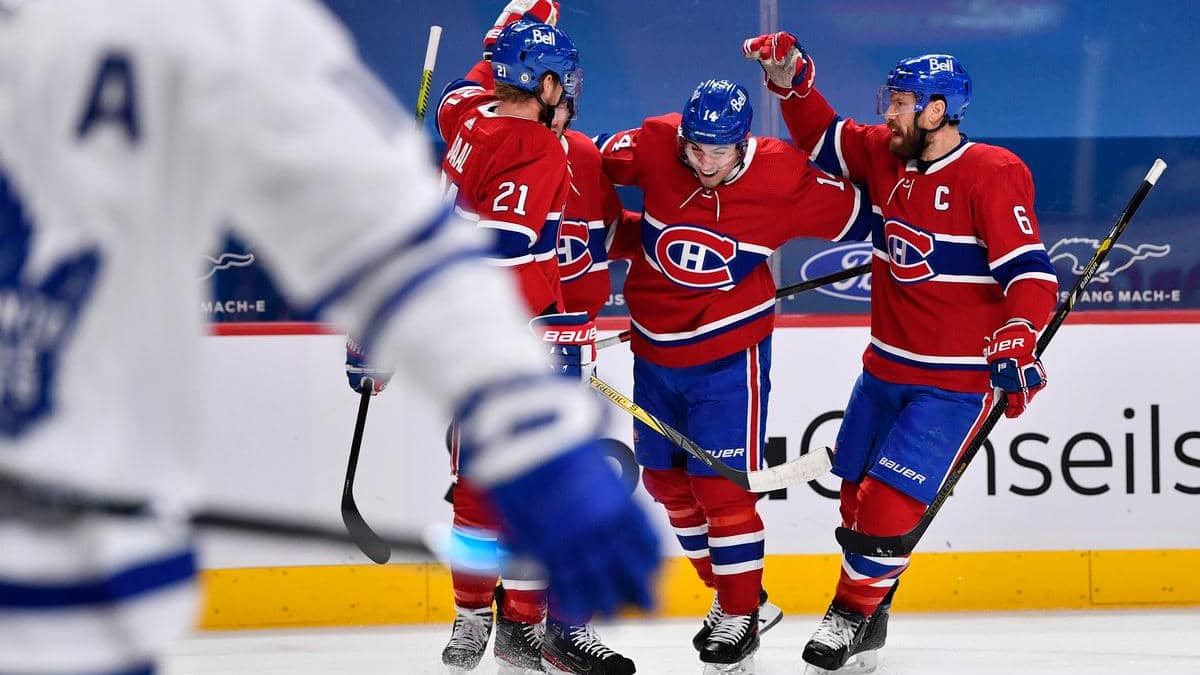 “Our team has been very good at times, but also at times confusing.” In a short sentence, Marc Bergevin summed up this season for the Canadiens. Against the best team in the North Division, the Canadian chose to show his good side.

• Read also: Reinforcement in defense for the Canadian; Victor Mete on waivers

Defeated in its last three games, CH triumphed over the Toronto Maple Leafs 4-2 on Monday at the Bell Center. Before his visit to Montreal, the Leafs had won six games in a row and nine of their last ten.

For one evening, Matthews and Marner didn’t roar too much. Yes, Matthews scored his 32nd goal of the season on an assist from his loyal accomplice. But with the exception of this play in the second period, the two Leafs guns did not make too much noise.

The relative silence of Matthews and Marner is attributable to a very strong game by Phillip Danault. The Quebecer won his matchup against Matthews, who scored his only goal while Nick Suzuki’s unit was on the ice.

“It’s my bread and my butter. I like that role, that of playing against the big lines, noted Danault. I am happy, but not satisfied. ”

Dominique Ducharme had a happy hand by placing Paul Byron to the right of Danault and Tomas Tatar. Byron played well defensively as well as getting assists on both Tatar goals.

On the blue line, Jeff Petry and Joel Edmundson also did their job against the Maple Leafs’ top line.

A fragile team, as was the case for CH after three setbacks, could have breathed nervously at the end of the second period. When John Tavares tied the game 2-2, it was believed the visitors were going to keep the momentum going.

But Josh Anderson changed Sheldon Keefe’s side’s plans by scoring his 15th goal of the year. Less than two minutes after Tavares’ goal, Anderson once again showed his great speed by decamping after a shot blocked by defender Brett Kulak. The big winger beat Jack Campbell with a good wrist shot as he rushed into opposing territory.

“It was important to bounce back,” said Anderson. Especially after our last game against the Jets. We had abandoned Jake [Allen]. He played very well tonight [lundi]. The Leafs pushed in second, but we did enough good things to win. ”

Speaking of Allen, the New Brunswick goaltender turned back 23 shots to sign his second win in just eleven (2-5-4) starts.

Xavier Ouellet will slip again in the hierarchy of the team at the blue line. When Jon Merrill and Erik Gustafsson complete their mandatory seven-day quarantine, Ouellet is expected to return to the reserve squad or he will resume his title as captain of the Laval Rocket. In his fourth game this season with CH, Ouellet did well on Alexander Romanov’s right.

The end of a sequence

Jack Campbell has his eyes on Toronto’s number one goalie. In Frederik Andersen’s absence, the American set an NHL record by winning his first 11 starts of the season. But there is always an end to a great story. The former Dallas Stars first-round pick suffered his first setback of the year, giving up three goals.

See Also:  ASSE: the muscular banner of the supporters of the Greens at Etrat

Jeff Petry needed a change. Dominique Ducharme recognized this by replacing him with his partner from the first weeks of the season, Joel Edmundson. It was the right choice. Petry and Edmundson played a strong game defensively, beating the trio of Auston Matthews, Mitchell Marner and Alex Galchenyuk. At 26:46, Edmundson was the most used defenseman at CH.

Bleached in its four previous games in numerical superiority (0 in 9), the Habs finally scored. Nick Suzuki hit the target during a penalty to Zach Bogosian.

Jake Allen was repeating clichés to describe his feelings after a first win in four starts. But to talk about Phillip Danault and his impact against the big lines of the opposing team, the former Blues goalkeeper has become talkative again.

“Phil doesn’t have an easy role. It’s a job that few players want. He always faces the best. He likes that. He takes pride in limiting their chances of scoring. He does not always have big numbers on the offensive plan since he sacrifices himself defensively. To me, this is one of the toughest jobs in the NHL. ” – Jake Allen

In the shadow of Joel Edmundson, who played nearly 27 minutes, Alexander Romanov also offered a very good game to the left of Xavier Ouellet. The 21-year-old Russian led the team with seven hits.

“Romanov is improving. He becomes more confident. That’s what you want to see from a young player. He works very hard. When it is robust it has an impact. The big names on the other side don’t like it playing against him ”- Josh Anderson

See Also:  LBM footballers are arrested for vandalism while intoxicated

Since Brendan Gallagher’s right thumb fracture, there is a significant hole in the right wing alongside Phillip Danault and Tomas Tatar. In the fourth game without Gallagher, Paul Byron was given a mandate to replace Gallagher. “Ti-Paul” passed his first test with two assists and inspired play against the dangerous unit of Auston Matthews, Mitchell Marner and Alex Galchenyuk.

“Paul is a fast guy, that’s his big asset. He can play in all lines. He can counter the speed of big threesomes. He’s a solid player ”- Phillip Danault

After three straight losses, Phillip Danault called the win over the Maple Leafs a win of character.

“It was Important for us to bounce back. We knew we were going through a lean period. We showed big character. We pulled ourselves together. It really is a big victory of character. Jake [Allen] also made some big saves. ” – Phillip Danault