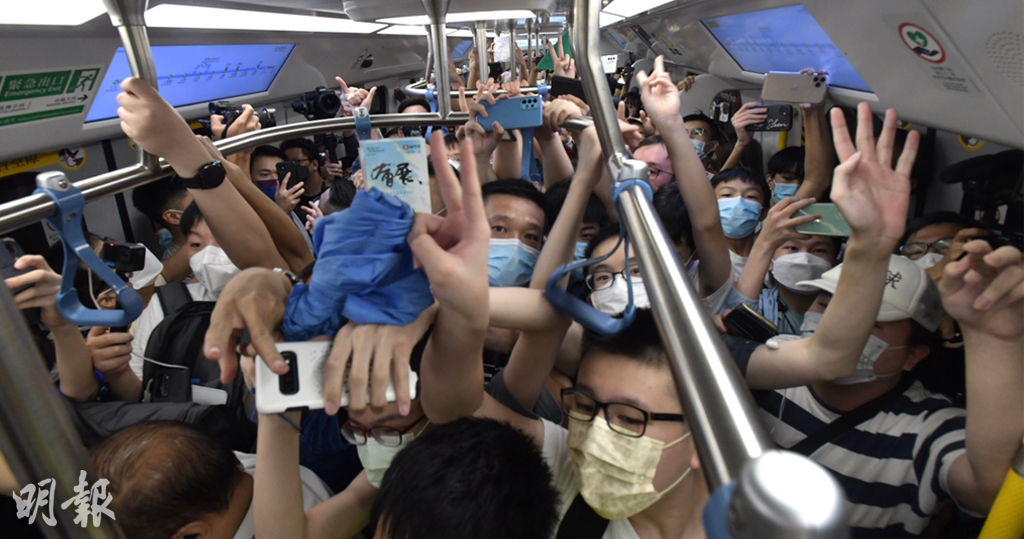 Exit A3 of the Convention and Exhibition Station will open at about 4:40 in the morning, 5 minutes earlier than the original time. A large number of railway fans rushed into the station by escalator from the entrance of the overpass. The entrance gate opened at about 5:00 a.m. at the exhibition station. Railway fans rushed into the gate and rushed to the platform. The scene was chaotic for a time, and some people fell. At 5:25 in the morning, the East Rail Line cross-sea special train departed from the Exhibition Station, and the train was very crowded. While waiting for the departure of the train, passengers sang the MTR’s latest promotional song “I’m Really Excited to Cross the Sea with the East Rail”.

Railway fan Luo Zhechen sang “I’m really excited about the opening of the Tuen Ma Line” when the Tuen Ma Line opened to traffic last year, and became an Internet celebrity. Luo Zhechen appeared at the exhibition station this morning (15th), and many railway fans booed. Many railway fans surrounded him and asked for a photo. Luo Zhechen said that the opening day of the cross-sea section of the East Rail Line happened just after he completed his diploma examination, and he felt lucky about it. He said he was excited, “because Hong Kong people have been waiting for this line for years.”

A railway fan wearing a Tyrannosaurus costume took the first train, attracting a group photo of railway fans and children. A railway fan who goes by the pseudonym “Jurassic” lives in Sheung Shui, describing that “as soon as he was born” he expected the East Rail Line to cross the sea. He used to take the MTR to Hung Hom Station every morning, and then transfer to bus No. 104 to cross the sea to work. Now he can take it directly to the Convention and Exhibition Station. It is expected that the journey will be shortened by 5 to 10 minutes. “You can go directly from the first station to the last station.” He believed that the opening of the convention and exhibition station was a historic moment. He thought that dinosaurs had never been on the East Rail Line, and thought that pretending to be a dinosaur would make the day even more special.

The escalator at the Convention and Exhibition Station suddenly stopped the MTR: the operation was not smooth and it has been repaired

However, when our reporter took the escalator to the platform of the exhibition station, the escalator suddenly stopped. There were 4 or 5 passengers using it at that time, and they got to the platform with the assistance of the staff. Li Jiarun admitted that the escalator was not running smoothly, and activated the protection device. After inspection by the engineering staff, the repair has been completed.

Related video clips about the opening of the East Rail Line crossing the sea:

Short film:The convention and exhibition station is the first to open the public overnight to take the special first bus