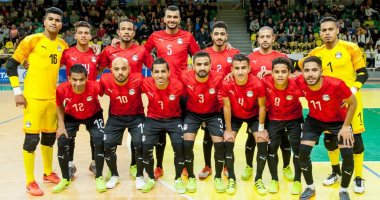 Morocco won the Arab Futsal Championship after beating Egypt by four, in the tournament hosted by Egypt, which started on May 20 and concluded today.

succeeded Egypt national futsal teamLed by Hisham Saleh, in a 4-3 victory over his UAE counterpart after the extra time ended, in the match that brought them together in the semi-finals of the Arab Futsal Championship hosted by Egypt, to qualify the national team for the final match to face Morocco.

The Egyptian futsal team qualified for the semi-finals, after topping its first group with 7 points, then Bahrain secondly with 6 points from two wins, then the Kuwait team (one point), followed by the Mauritanian team without credit..

The Egyptian futsal team, led by its technical director Hisham Saleh, defeated its Mauritanian counterpart 8-1 in the first matches of the Arab Futsal Championship, which Egypt will host from May 20 to 30 at Hassan Mustafa Hall on October 6, and scored the goals of the national team Ahmed Abdel Qader. “Moza” scored two goals, Khaled Yousry two goals, and a goal for each of: Mohamed Talaat, Boudi, Mohamed Saeed, and Abdel Rahman Al-Ashwal, while Makiba Mohamed scored Mauritania’s only goal. In the second match, Egypt tied against Kuwait with two goals for each team, where he scored for Kuwait the duo. Abdel-Latif Al-Abbasi and Abdel-Rahman Al-Masbahi, while Egypt’s goal came by Abdel-Rahman Moawad and Mustafa Khalaf, and in the third match, Egypt defeated Bahrain 1-0 with a goal scored by Mohamed Maradona.