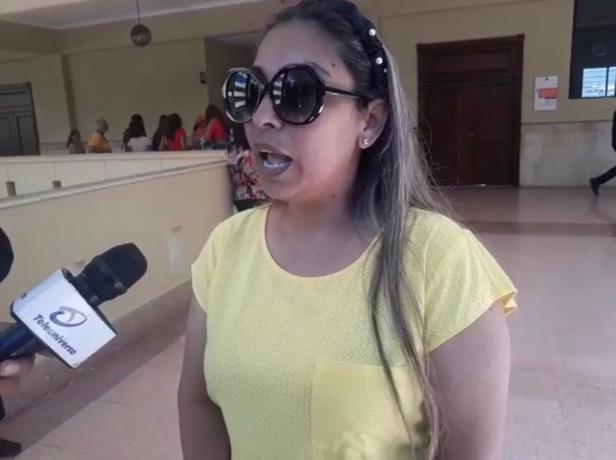 After rumors that Sarah Rodríguez’s partner is related to the alleged scam committed by the accused, the young woman’s mother, Jankeila Morillo, assures that her daughter Ámbar Saray does not even have papers or a bank account to house that “stolen” money .

“My family has nothing to do with this scam. If it were like that, I would have moved or gone on vacation a long time ago. We have our own money, we don’t need someone else’s,” said Morillo, who is Venezuelan and her daughter is too.

Likewise, he accused Alberto Corniel and Millicent Vila for all the “attacks” and defamation spread against Ámbar through the Instagram account called @ajcorniel08.

“Everything that happens to us is their fault. My integrity and that of my children are at stake. In February they came to my house to attack us, they are out of control,” Morillo said.

For this reason, Ámbar expressed that she was very afraid that they could “do something” to both her and her little two-year-old daughter.

“I spend alone with my daughter and I hardly go out. Imagine if they do something to us while we are with her,” said Sarah’s partner, with whom she has a one-year love relationship.

Finally, Ámbar’s mother emphasized that the only link they have with Rodríguez is that she is her daughter’s partner, “more nothing.”

The judge of the Office of Permanent Attention of the Judicial District of Santiago, postponed for this Wednesday the knowledge of the measure of coercion that was tried to meet Rodríguez, accused of being the head of a network that defrauded more than 50 people with a false investment model that promised to multiply what was contributed through the cryptocurrency market.

While Johan Newton López, who represents the more than 50 plaintiffs of fraud that Rodríguez used through a fictitious business, which he used as a channel of deception, according to the Public Ministry to the entity Black Box Investmen, said that due to the large number affected , a special room is enabled to know the measure of coercion.

This alleged scam, which exceeds 50 million pesos, is under investigation by the Public Ministry, who determined that the defendant presented a fictitious business through the entity Black Box Investment EIRL and that, to claim the success of the investment, “He showed an apparent economic solvency, due to the opulent life he exhibited, with vehicle purchases, sponsorship of events and alleged side businesses.”

In addition, the accused used false documents to show alleged transactions and investments, as indicated by the Public Ministry in its accusation.

Based on the testimonial, expert and documentary evidence collected, the investigative body filed charges against Rodríguez Díaz for violation of article 405 of the Dominican Penal Code, as well as for articles 15 and 18 of Law 53-07, on High Technology Crimes and Crimes. .

The Public Ministry asks for 18 months of preventive detention and that the case be declared complex.