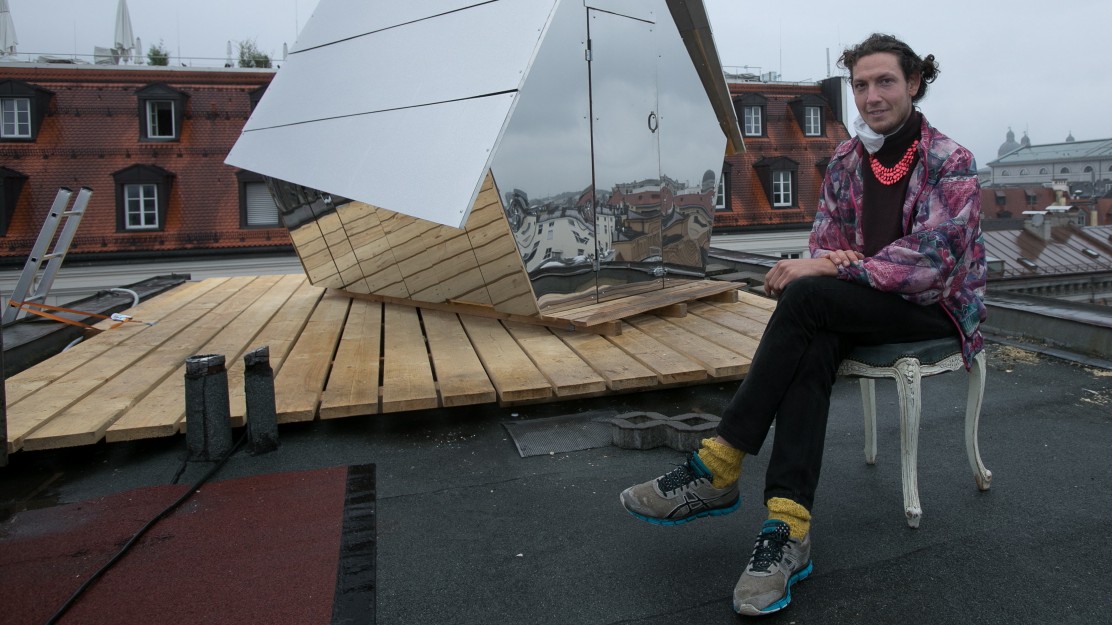 The artist Jakob Wirth has temporarily accommodated himself in a house on a parking garage roof and is thus protesting against the “hierarchy of living”.

Jakob Wirth calls his living situation privileged and yet precarious. Privileged because he looks out over the roofs of Munich from his wooden house to the Max Monument. Precarious because he lives, sleeps and eats on only 3.6 square meters. After Weimar and Berlin, the “Penthouse à la Parasit”, as the artist calls the little house, should now draw attention to the lack of affordable living space in Munich.

At the beginning of June, Wirth and a colleague initially built the installation unnoticed on the roof of the parking garage at Hildegardstrasse 2 behind the Kammerspiele. The house was on the top parking lot in less than five hours. When the cleaning staff was initially amazed by the structure, Wirth pointed out that it was an art event. The 28-year-old landlord has been living in his parasite-like penthouse for eleven days. “Parasite is not to be understood here as a parasite,” he says. After all, you can live independently in the house thanks to your own electricity through a solar panel, a composting toilet and a camping stove. “This parasite is more about irritating and drawing attention to a bug in the system,” explains Wirth.

A system in which less wealthy people are pushed to the periphery. The penthouse à la Parasit opposes this by taking a position next to the center that is otherwise reserved for expensive penthouse apartments. Appropriation from above is what the artist duo call their strategy. This reverses the hierarchy of living in the city – the richer the higher. “It is about becoming active and thinking about how we can recapture space as a city population,” says Wirth. The idea is reminiscent of the “Shabbyshabby Apartments”, bizarre temporary living units of the Berlin space laboratory, which Kammerspiele director Matthias Lilienthal had installed in the city in summer 2015.

The stainless steel cladding of the house reflects not only violet sunsets, but also the windows of the Mandarin Oriental Hotel opposite. The luxurious rooms behind are empty. Living space that could have been used elsewhere in the Corona crisis, Wirth notes. He himself spent two weeks in quarantine in the wooden house after a stay abroad. There is even a mailbox. Wirth would like to receive mail there by the end of June. Whether the city of Munich approves the wooden house for so long is currently being decided. However, Wirth has a good feeling because the city has so far been very cooperative. The owner of the multi-storey car park would have no objection to the art campaign remaining on his roof until the end of Wirth’s quarantine on Tuesday, the artist says.

In the long term, the car park is not suitable as a host for the parasite. It will be torn down as soon as the underground car park on Thomas-Wimmer-Ring is completed. Where the little house is now, an expansion of the Mandarin Oriental Hotel is planned. “Instead of penthouses with five-star service, we would have liked affordable living space here,” says Wirth. Wirth is already looking for a new roof in Munich for its 3.6 square meters of living space. “If the landlord shakes, the penthouse a la parasite must give way,” says the 28-year-old.