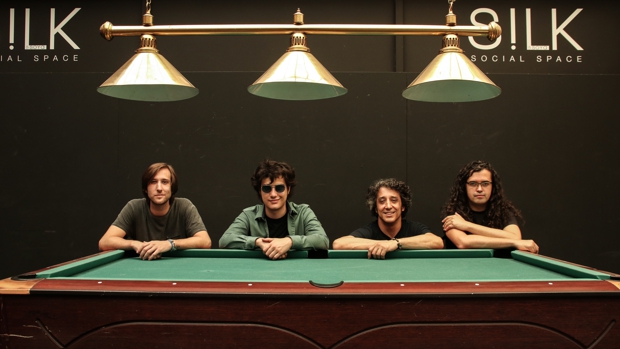 At just nine years old, the man from Madrid with Galician roots Arcadio Falcon he picked up his first guitar and at thirteen he wrote his first song. From that moment on, the fever for American music and literature took hold of his body and only surnames like Dylan or Whitman served to calm him down. With this musical background and his guitar, he landed on the Berklee College of Music de Boston at the age of seventeen, where he graduated in record time and drew attention for his gifts as a composer. He was also part of the hard core of the Song Club for the World created by producer Javier Limón, as well as an internship writing music for commercials at TCAA Boston. In 2017 he formed the group Falcon’s Bandits, with whom he published a homonymous EP in the United States and which opened the doors of emblematic places of the Boston scene such as the Hard Rock Café, Cantab Lounge, Midway Café and the Bohemia Club, a true achievement for a Spanish musician in North American lands.

Now publish «Millennials, tiranos and other stories», a second album of American folk, soft rock and singer-songwriter melodies sung in English, Spanish and Galician, for which prestigious national and international musicians have participated. This is the case of one of the best with the steel-guitar in Spain, Álvaro Lamas (Los Secretos, Antonio Vega…); the innovative international group of American Track Dogs; Valentín Iturat (Patax, Afrodisian Orchestra, Orquesta Nacional de Jazz…), the incombustibles of Madrid’s soul-funk Watch Out, the exquisite voice of Guadi Galego (Berrogüetto…), the composer, pianist and musical producer for theater, film and television, and the first composer of the Lisbon Philharmonic Orchestra, Juan Antonio Simarro or the great guitarist of the Hawaiian ukulele player Taimane Gardner, Ramiro Marziani… And, of course, The Bandits (Fabbio Alonso on bass and Víctor Martín, guitar and backing vocals).

How did the title of the album come about?

It picks up the theme of the album very well; a 21st century in which very important decisions are going to be made for our species and a generation, mine, which, in my opinion, does not know what is coming.

There is a considerable variety of styles on the album, does that flow naturally, or is it somehow the approach you were looking for on this album?

I don’t like to “force” myself to go in a specific direction when I do something. Yes it is true that I have been exploring more styles for this second work than for the first, but it has been natural; simply my evolution as a music fan.

One of the highlights of the album, “Tommy the killer”, is inspired by the story of a shooting at an educational center in the United States. Was it difficult to come up with an approach that did not accuse or victimize?

Exactly, that was the hardest part. I have retouched the lyrics several times and I think that, although it is a fairly complete version, it will evolve something else. It is difficult to think of one of these mass shootings that take place in schools in the US from Spain, it is a reality totally alien to ours. I wanted to know what has to happen to a person during his life to get to the point of committing such an act, trying to judge him as little as possible.

How do you think the sensations will be in Rockville, having distance, masks, etc …?

I think it will be a little colder, like everything in general in these months. It will also depend on the band; if we put on a good show, music should do the rest.

Is the combination of English and Spanish definitely normalized in your opinion?

In my case, from a very young age. I started writing in English because of the music that I grew up with and inspired to dedicate myself to this. Before meeting Sabina or M-Clan I spent a lot of time with Paul Simon, The Rollings’ and Leonard Cohen. Dylan appeared later to pass them all on the right.

The album cover symbolizes the death of… who?

On the album there is a song, “Faceless Men”, which talks about the faceless men behind the pumps and bandages.

Has confinement made you write new songs in a different way?

No, in any case it has made it more difficult. I think that to write a true song you have to be in contact with the world around you and that is difficult now.

What was the first song you wrote when you were 13 years old?

Hehe, I wrote it on a plane back to Madrid for a girl who was left behind and who I have not seen again. Although this of the networks removes the mystery to this type of thing.

What did your stay at Berklee College of Music in Boston bring you?

A realistic perspective of what the world of music is. Watching DVD’s of Clapton as a child you think that it is about playing and posing on stage. My time in Boston taught me all the work and the details behind it.