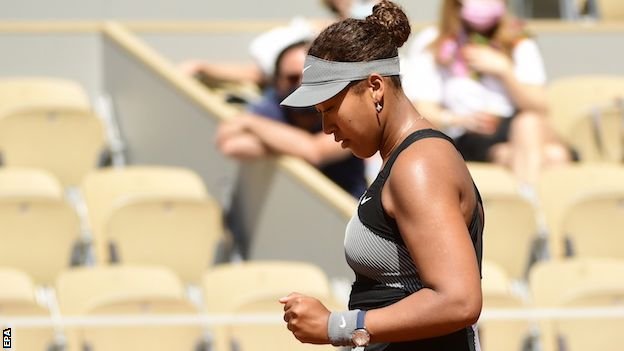 Japanese tennis player Naomi Osaka faces the prospect of disqualification from the French Open and the upcoming Grand Slams (grand slam tournaments) if she continues a media boycott.

Osaka said last week that she did not want to take part in a press conference during the French Open because she wanted to protect her mental health.

Osaka was fined $15,000 for her media boycott, after the end of the first round on Sunday, with her victory over Romania’s Patricia Maria Teague.

The statement added that after announcing her position, the French Open team asked the 23-year-old to reconsider her position.

The statement said the organizers wrote to Osaka offering support, while “reminding it of its commitments.”

“One of the basic elements of the Grand Slam rules is the players’ responsibility to interact with the media, whatever the outcome of the match, and it is a responsibility that players bear for the game, the fans and themselves,” according to the statement.

“We have advised Naomi Osaka that if she continues to disregard her media obligations during the tournament, she may expose herself to further consequences of violating the Code of Conduct.”

The statement indicated that repeated violations may lead to more severe penalties, including heavy fines and suspension of participation in the tournament.

He recalled that the rules are in place to “ensure that all players are treated reciprocally”.

Osaka issued a statement Wednesday saying she would not face the media during the French Open, and talked about the impact of press conferences on players’ mental health.

She said that expecting players to answer questions from the media after a defeat is like “kicking someone on the ground.”

“I often feel that people do not care about the mental health of athletes, and I am certain that this is true whenever I watch or participate in a press conference,” she said in the statement, which she posted on social media.

“We often sit there and we are asked questions that have been asked of us many times before, or we are asked in a way that makes us doubt our mental abilities,” she said. I will never again put myself in front of people who doubt me.”

According to the rules of the “Grand Slam” tournaments, players can be fined up to $20,000 if they do not fulfill their obligations to the media. The Women’s Tennis Federation says players have a “responsibility to the game and the fans”, which includes speaking to the media during competitions.

Many athletes praised Osaka’s stance, while others said speaking to the media was “part of the profession.”

Osaka spoke after her victory over Tegue in the usual on-court winner’s interview.