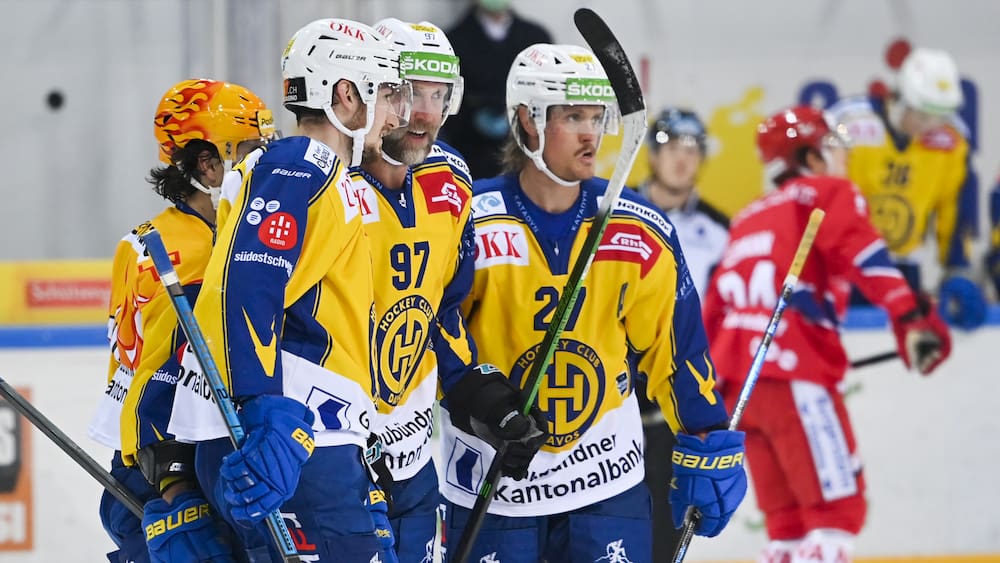 A decision that was made at the late summer league meeting will be felt by Davos on Saturday. At that time, it was agreed that the priority in this uncertain corona season was to get through as many games as possible. The following is then determined: If a team has twelve field players and one goalkeeper, the game must be played.

The HCD lacks ten (!) Regulars: Palushaj, Dino Wieser, Stoop, Du Bois (all injured), as well as Aeschlimann, Lindgren, Corvi, Barandun, Egli and Frehner, who are still in isolation. Nevertheless, they meet the requirement with one goalie (Mayer) and 17 field players. There are also Lutz (20) and Canova (19), whose first NL appearance is this season. Otherwise they are used by the SL team Ticino Rockets.

One could have a bad premonition for the course of the game after the quick 1-0 of the Lakers: Goal scorer Clark is left completely alone in front of the enclosure, all allocation has been lost. The fact that the Grisons have difficulties getting started may be due to the lack of rhythm of the game. Noteworthy: You have come to an average of only one game per week since the start of the season. A challenge, especially for the goalies, who, true to the principle of rotation, only have an assignment every two weeks.

Clark’s wake-up call works. The Davos people turn up. And as usual with the highest speed: Andres Ambühl (37). The oldie works hard, wins important duels (before the 3: 1 against Clark) and nets ice cold to the important 4: 2 after the goal of the Lakers. And that’s not supposed to be the only shorthander in the same penalty from HCD-Knak! Only 38 seconds later, Herzog hits outnumbered, who previously launched Ambühl with a little sugar pass and Lakers goalie Nyffeler has already successfully blocked the view (before the 1-1 equalizer).

The HCD rump troop leaves only one difference compared to the 9-2 victory in October: They still give the SCRJ a chance. For example, with puck losses like Baumgartner’s before the 3: 5 or Marc Wiesers before the 4: 6 goal. Even after Thornton’s 7: 4, the Lakers are still on the Davos’ heels and shorten. But let a power play pass in the final minutes. (NV)

The best: Duke (Davos). Shines as a disruptive factor in front of the goal, passer and goal scorer.

HC Lugano conceded six goals on Friday in Biel (4-6 bankruptcy). More than ever this season. Top scorer Mark Arcobello was pretty pissed off afterwards. The American was rightly named the best player of his team after two brilliant passes that led to two goals. Nevertheless, he hissed at the award ceremony: “You need glasses!”

Against the ZSC Lions, binoculars would have been needed to spot the 32-year-old. Like his teammates, Arcobello never really gets into the game. Only 165 seconds are played. And coach Serge Pelletier sees himself forced to a timeout when the score is 0: 2. The French-Canadian uttered a few empty phrases for ten seconds. Without success.

The home team seems completely absent, always comes a step too late and is 4 minutes later even 3-0 behind. The ZSC Lions make three goals out of five shots. Niklas Schlegel, who is motivated to the tips of his hair against his ex-team, can be caught between the legs three times.

Because Tim Berni fails on the post after ten minutes, the Zurich team do not succeed for 103 seconds with two men and Herburger shortens to 1: 3, the Ticino can hope for the last third. But when Simon Bodenmann meets for the first time in his fourth game, the open is finally over at Lugano. PS: Arcobello is named best player again. (SR)

The best: Maxim Noreau (ZSC Lions), the defender shines as a preparer and clearer.

Lausanne also wins the second derby from French-speaking Switzerland in the same week. A top fight. But emotions only arise in the final phase. Friborg scored a goal seconds before the siren and without a goalkeeper by Julien Sprunger, but the referees dampened the cheer after studying the video images. Rightly so: Stalberg obviously lets himself fall on Lausanne’s goalkeeper Tobias Stephan without opposing influence and thus fulfills the condition of goalkeeper disability.

Gottéron stiffened after the clear 1: 6 on Tuesday in Lausanne, primarily on a safe defense. However, this only works anecdotally, because the Vaudois keep expanding the game and then creating confusion for the opponent with direct passes. This time, Lausanne is not going all out. The handbrake is seldom loosened, especially on the offensive, but then the attacks sit well.

The best Gottéron player is goalkeeper Reto Berra, who delivers a few saves for the endless loop of highlights. After all, Gottéron remains in the running. Coach Dubé only allowed more risk in the final phase and thus embarrassed Lausanne several times. After the connection hit (jump, 44th minute of the game), Gottéron takes much too long until he finally goes into full force with more verve. The crowbar is used too late – more than one goal that doesn’t count won’t jump out. (DK)

The best: Berra (Friborg). Defends himself against the qualifications of the Vaudois with splits, pike jumps and reflexes.