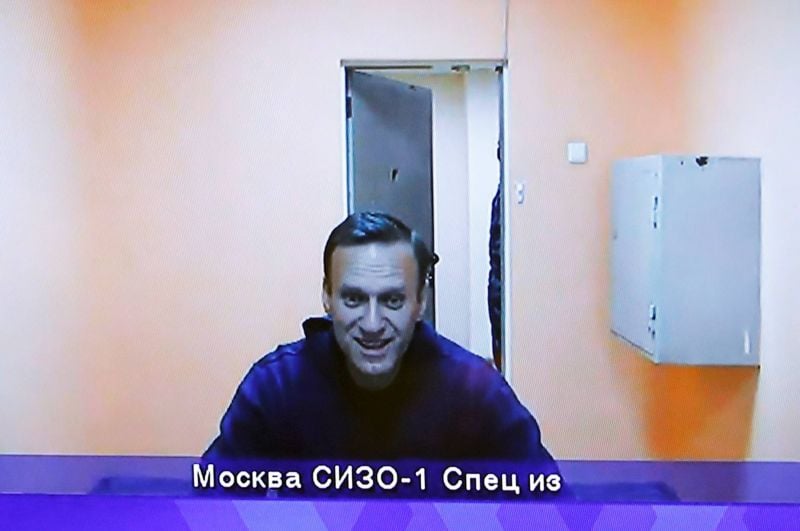 Americans and Europeans loudly demand the release of the Russian opponent Alexeï Navalny, but are also determined to continue their strategic dialogue with Vladimir Poutine, at the risk of confusing their message.

From Berlin to Washington, the Cold War was reinvigorated in rhetoric if not in action, with Westerners denouncing a Russian “authoritarian drift” and waving the specter of new sanctions against Moscow.

However, the master of the Kremlin is not giving up. Alexeï Navalny has been in prison since his return to Russia on January 17 after five months of convalescence in Germany following an alleged poisoning for which he attributes the responsibility to Vladimir Putin. Demonstrations calling for his release are severely repressed. And all Western requests for clarification on the circumstances of its poisoning – by a Novichok-type nerve agent, according to several European laboratories – remain a dead letter.

So what can Westerners hope for in this umpteenth showdown with Vladimir Putin, after the one over Ukraine or the Skripal affair, a former Russian agent poisoned by the same Novichok in the United Kingdom? Almost nothing, according to experts.

They intend to “make Russia and Putin pay a price in terms of reputation,” said François Heisbourg, special advisor at the International Institute for Strategic Studies (IISS) in London and the Foundation for Strategic Research (FRS) in Paris. . “But I don’t think anyone in the West is waiting for Navalny’s release let alone Putin’s downfall or going to Canossa on the poisoning attempt,” he said.

For Cyrille Bret, a teacher at the Sciences Po institute in Paris, the Western offensive “shows the Russian power that Navalny is not isolated on the international scene”. “But (…) it can also turn against him, discredit him as an ‘foreign agent'”, a fantasy deeply rooted in the Russian imagination inherited from the USSR, he deciphers.

Western leaders also support the opponent for reasons of “domestic politics”, he said. This is what their opinion expects from them. But “they have no other choice” than to discuss with Moscow all the issues of “collective security”, from arms control to Iranian nuclear power, he observes.

If he says he is “very worried” about the situation in Russia, the new American President Joe Biden also underlines the “mutual interest” of Moscow and Washington in working on issues such as the New Start treaty on nuclear disarmament (see elsewhere ). His French counterpart Emmanuel Macron, who in 2019 initiated a relaunch of the strategic dialogue with Moscow, without great results for the time being, makes the same calculation.

Paris has admittedly postponed the joint meeting of Foreign Affairs and Defense Ministers (“2 + 2”) scheduled for September 2020 because of the Navalny affair. However, “this cooling did not lead to cut ties”, underlines a ministerial source

As for Germany, on the front line in the Navalny affair, it intends to complete the Nord Stream 2 gas pipeline with Russia, despite pressure from Washington, which is hostile to the project.

“The government rightly criticizes the poisoning and arbitrary arrest of the (number one) opponent of the Kremlin (…) But it is trying to put the gas pipeline in a parallel reality, at the antipodes of what is happening in the Russia of Vladimir Poutine ”, the German daily Süddeutsche Zeitung reported on January 26.

In the end, the Europeans will send the representative of their diplomacy Josep Borrell in early February to Moscow to “send a clear message” on human rights, with the key to possible new sanctions against Russian personalities or companies. This will not change the situation, believes Fyodor Loukianov, editor-in-chief of the magazine Russia in Global Affairs in Moscow. “Sanctions are unpleasant, but not new. In addition, it pushes Russia to seek economic and technological alternatives, ”he said. “If this pressure continues, it won’t work. It will only anchor the conviction that the West wants to hinder Russia and that everything must be done to respond without failing, ”he opposes.

Americans and Europeans loudly demand the release of the Russian opponent Alexeï Navalny, but are also determined to continue their strategic dialogue with Vladimir Poutine, at the risk of confusing their message.
From Berlin to Washington, the Cold War was reinvigorated in rhetoric if not actions, with Westerners denouncing a “drift …