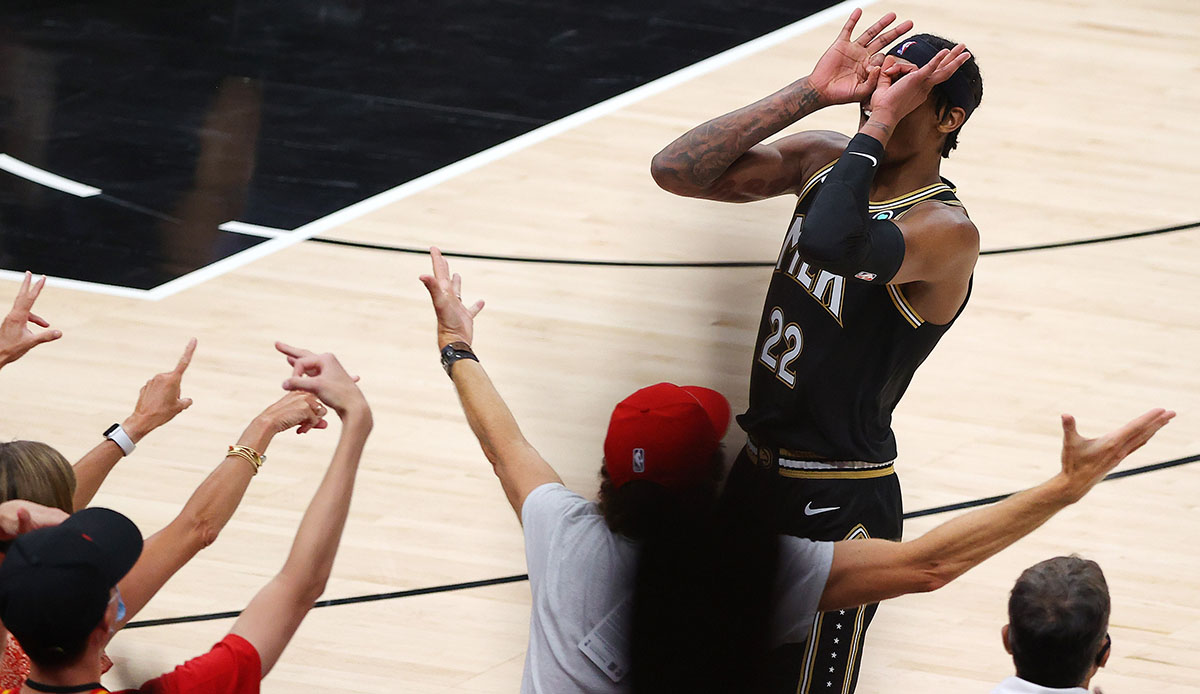 The Atlanta Hawks managed to equalize against the Milwaukee Bucks even without their best player. Suddenly there is a lot to speak for the team that has been written off so often – also thanks to someone who was supposedly rejected.

It didn’t speak much for Atlanta. In any case, the Hawks had started as a clear underdog in the series, as they had against Philadelphia before, but now the main reason why this status had not played a major role was missing. Trae Young tried to bite his teeth but failed to get fit in time and had to watch the game from the sidelines.

It speaks for this Hawks team that they did not let that deter them and that this game was openly designed even before Giannis Antetokounmpo was injured. Atlanta may not have been the bookies’ favorite, but in front of a very noisy crowd at the State Farm Arena, the Hawks were far from scared from the start. On the contrary.

Without their leader, the Hawks were more confident, courageous and consistent than their opponents, who had apparently been served this series on a silver platter in Game 4. No one embodied this more in the dominant 110:88 win than Lou Williams – nor someone like that who was already written off during this season.

Hawks vs. Bucks, Game 4: Here are the highlights of the game.

In fact, it wasn’t long ago that Williams himself considered retiring. During the season, his long-time employer, the LA Clippers, traded him and picks for Rajon Rondo to Atlanta.

In Los Angeles it had been decided that a more natural playmaker and better defender like Rondo would have a higher value in the playoffs than the incarnate Microwave Williams.

He took it personally, but he also accepted the challenge and tried to support the franchise player since arriving in Atlanta. “He accepted it. He knew that Trae was the future of this organization,” said Nate McMillan. “He’s been really happy to be a mentor to Trae, to show him things. He really sacrificed a lot to help us.”

Lou Williams starts for the first time in his career

The coach mainly used Williams as a backup, especially against Philly Williams often played alongside Young, because the Sixers could not punish this defensively very limited lineup consistently. In Game 4 against the Bucks, Williams now had to take on a new role – for the first time in his career, the 34-year-old was on the court from the start in a playoff game.

He did this with flying colors. Williams played 8 assists with only 1 turnover, he navigated his way through the Bucks defense with the characteristic nonchalance and hit almost every one of his throws (7/9). He didn’t overturn and force almost nothing, apart from a wild transition throw over the outstretched arm of Giannis, which also fell in.

“It’s not a big adjustment,” Sweet Lou said of his role afterwards. “You know the minutes will go up, otherwise you just get ready for a basketball game. We’re professionals. I know it’s a cliché, but when someone fails, someone else has to step in. Sometimes you have to come together as a team to create success. “

Atlanta Hawks benefit from their depth

The Hawks succeeded in this game, as important contributions came from the entire squad. Bogdan Bogdanovic shook off the last weaker performance, moved better and hit six threes for 20 points (plus 4 steals). Kevin Huerter was effective from the middle distance and as a playmaker. Danilo Gallinari delivered scoring, Clint Capela hit one of the strangest throws of this postseason.

And then there was Cam Reddish. The 2018 lottery pick was only on the court for the second time in this postseason and played its first relevant minutes since the end of February, but he didn’t notice that. With a good defense and a strong shooting, the youngster fit in with an excellent Hawks collective.

“He’s proud of his defense. He’s one of the few players in the league who does that,” enthused McMillan. “He draws his energy from it. He’s less interested in the offensive, he comes in from the start and wants to play defense.”

Should his body play along, Reddish was out for much of the season due to problems with the Achilles tendon, beckoning him to play an even bigger role in the course of the series. That could prove valuable if Giannis actually fails and Middleton becomes the first option of the Bucks offense – a fit Reddish is the Hawks’ best defensive option against the All-Star on the wing.

Players like Reddish and Williams are in a sense symbolic of the differences between the Bucks and Hawks in the previous series. Milwaukee obviously has star power, but looks in vain for support for Giannis, Middleton and Jrue Holiday from time to time. In this game, the supporting cast hardly delivered anything that could be counted.

Atlanta, on the other hand, lives next to Young from its depth, which seems even more impressive when you consider that Reddish was missing for months and that De’Andre Hunter, the best winger, is still missing at the moment. “We had repeated failures throughout the season. So we all know this next-man-up mentality,” praised McMillan.

This will also be in demand in the coming games, at least two are left. At the Bucks there is a big question mark behind Giannis, an MRI should provide clarity on Wednesday. In the Hawks, two starters, Young and Capela, are questionable. The NBA Playoffs 2021, they remain a battle of attrition.

And the hawks are still there, no matter how many times they have been copied. There are only two victories left to the finals.