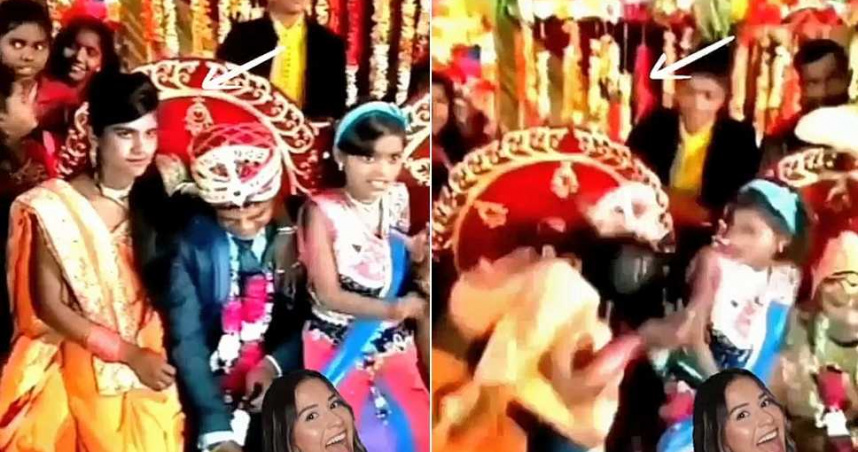 what’s the situation? A couple married in India. During the wedding, the bride’s sister violently kissed the groom. The guests cheered, and the bride’s sister smiled contentedly after the kiss. The picture went viral on the Internet, sparking discussion.

According to comprehensive foreign media reports, a couple of weddings are held in accordance with traditional customs. The bride and groom sit on chairs on the stage, waiting for the guests to take photos with them. When it is the woman’s family, the two younger sisters are sitting in front of the bride and groom. Beside, the younger sister in orange clothes grabbed the bridegroom’s head and kissed wildly. The other younger sister was stunned when she saw it, covering her mouth and staring at her elder sister wildly, in disbelief of what was happening in front of her.

Many guests at the scene were frightened by the bride’s sister’s out-of-order behavior, but some relatives and friends found it interesting, so they laughed. The bride’s reaction was dull, while the groom was embarrassed and showed a shy smile. It is understood that the bride’s sister is purely a “prank” and only kisses her brother-in-law at the wedding. There is no unethical relationship between the two. However, the video is still causing an uproar on the Internet.

After watching the 13-second video, netizens talked a lot, leaving a wide range of comments, “The bride and groom seemed to know in advance that they were going to kiss”, “Basic vampire”, “I will hurry up and wash my face”, “How thirsty”, “Fortunately, the groom does not Go back to kiss, or you will be in trouble”, “What the hell is my sister doing? Is she crazy”, “Who is this shameless girl?”