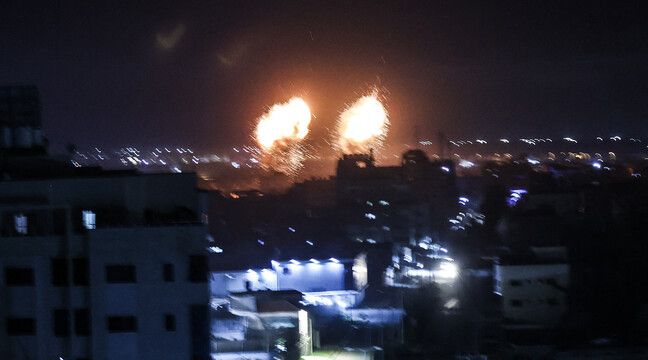 For the second time since the end of the lightning war in Gaza, the Israeli air force bombed Hamas targets in the Palestinian territory overnight from Thursday to Friday, in retaliation for launching incendiary balloons towards Israel. Shortly before midnight, the Israeli army said its fighter jets had targeted positions of the Islamist movement Hamas in the Gaza Strip in retaliation for the fire of incendiary balloons that started a dozen fires in southern Israel.

The army claimed to have targeted a Hamas military site and a rocket launching site, located respectively in Gaza City and Khan Younes, a city in the south of this enclave under Israeli blockade for nearly 15 years. And AFP journalists in the Gaza Strip reported blasts.

After these Israeli strikes, militants from the al-Qassam brigade, the armed wing of Hamas, “fired machine guns” at Israeli villages surrounding the Gaza Strip and drones patrolling the sky, an official told AFP movement. Sirens sounded in a number of Israeli villages bordering the Gaza Strip, but the Israeli army said their triggering “was not related to rockets” but to fire from Gaza.

Second incident since the ceasefire

This is the second round of Israeli strikes in the Gaza Strip since the start of the week and the end of the 11-day war, from May 10 to 21, with the armed Islamist movement Hamas, in power in the Gaza Strip, Palestinian micro-territory of two million inhabitants. These clashes claimed the lives of 260 Palestinians, including children and adolescents, and 13 people in Israel, including a child, a teenage girl and a soldier.

These new exchanges of fire come as the UN and Egypt try to consolidate the fragile ceasefire that made it possible to end this lightning war, and the approach of the visit, scheduled from Saturday, in the United States of the head of the Israeli army, General Aviv Kohavi. The latter is due in particular to Florida, to the headquarters of the Military Command for the Middle East, and will return with his American interlocutors to the war which pitted the Hebrew state and Hamas against each other for 11 days.

In addition to the reconstruction of the densely populated enclave and under Israeli blockade, the head of the Israeli army must discuss with his American counterparts a possible agreement to exchange prisoners and Iran, the N.1 enemy of the Hebrew state, which maintains privileged relations with Hamas.

Iran in the background

At the same time, Hamas said it was open to “indirect” negotiations regarding an exchange of prisoners, with Israel wishing to repatriate the bodies of two soldiers killed in 2014 and two civilians who entered Gaza of their own accord and have been detained since.

The return of the remains of the two soldiers is a “prerequisite for any major development” about Gaza, an Israeli army official told AFP on Thursday. According to the same source, Kohavi will discuss Iran’s “violations by Iran of the Iranian nuclear deal” of 2015, from which the Trump administration withdrew in 2018 but which new US President Joe Biden wants to get back on track. .

“We must quickly prepare for a return to the Iran nuclear deal,” the new foreign minister Yaïr Lapid said this week, specifying “that Israel will do everything in its power to prevent Iran. to get the nuclear bomb ”. A page in Israel’s history turned on Sunday with the constitution of a new government ending 12 years of uninterrupted reign of Benjamin Netanyahu, the most enduring prime minister in the history of the Jewish state.