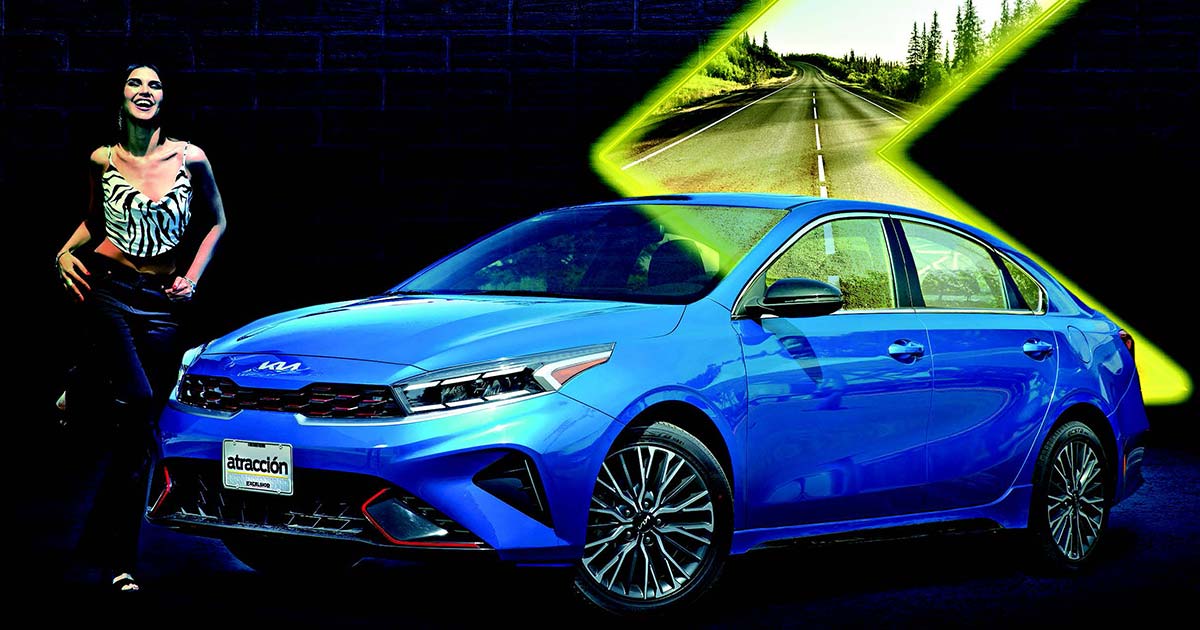 EIt was time to renew and Kia decided to do it in the best way, not only by placing its new logo on the hood of the Forte update but also taking advantage of the fact that it had already taken out the tools to give the whole car a little jack’s hand at once.

Not all vehicles in the South Korean company’s product portfolio had the same fate, but the Forte did make some pertinent adjustments to look more attractive.

Although there are a couple of other variants that change significantly and that are also part of the proposal that is offered under the name of Forte, such as the hatchback versions and those that under the hood have a turbocharged heart, it was up to us to evaluate the powered sedan by the naturally aspirated 2.0-liter L4 engine.

Of this specimen there are four executions, which differ mainly in finishes and equipment but share the same mechanics, so we can see important similarities between the LX, EX and GT Line versions, which is what you are seeing on these pages.

For an untrained eye or for an enthusiast who gets carried away by the first impression, the GT Line version could be confused with the GT and with good reason, as they share unique aesthetic details that make them look like the most sporty Forte in the range. so it is easy not to realize that they are not the same, and there are only three ways to know that they are different: the first by driving it, and when feeling the impulse of the turbocharged engine, knowing the answer; the second, looking at the emblems that say GT Line and the third, opening the hood to realize that the engine cover says Turbo GCI.

IT LOOKS GOOD BUT IT’S MORE THAN A PRETTY FACE

To understand this execution, we will have to think about those who when they configure their car opt for sports seats, which in addition to providing better support are more comfortable, for those people who like to see red accents in the air intakes of their car , those who like to customize and attach accessories to their companion of a thousand battles and that even if they do not leave the factory with them are able to go looking for them elsewhere, Kia decided to have a version for those enthusiasts who they like to put a little more investment in their car image.

In addition, this execution is at the top of the food chain (just below those that have a turbo engine) and offers many other advantages, in addition to the aesthetic issues, starting with the entire arsenal of electronic assists that are available. you can have in a Forte, such as assistance to keep lane, frontal collision avoidance, driver attention monitor, among others, which put you at the forefront in this area, in addition to including automatic LED headlights, 17-inch aluminum wheels , an inch larger than those of the other versions, a power sunroof and the 10.25-inch floating touch screen that is only found in the three most equipped versions.

The small details in the interior of this sedan present themselves, the finishes, materials and quality of assemblies are a very good letter of introduction and put the Mexican manufacture very high, since this car is made in the factory that Kia has in the state of Nuevo León.

We’d be untrue if we said we wouldn’t have liked the 201-horsepower, 195-pound-foot of torque 1.6-liter turbocharged engine under the hood, yet it was time to see what this 147-horsepower was made of.

The first thing that caught our attention was the ride quality, because, thanks to its tuning, we just started to move forward and we noticed the good work of the suspension, which at no time feels too hard or punishes the ride of the car, on the contrary, it is comfortable but at the same time it helps the chassis to have a torsion that keeps the car under control, knowing at all times what is going to happen when facing a curve, a bump, a pothole or uneven surfaces.

The six-speed automatic gearbox (IVT) is a good ally for the driver to take advantage of the attributes of the engine, which at times is more efficient than sporty and to make it a little more rabid you have to move the lever to manual mode to force a more immediate reaction and there you get more out of the shift paddles located behind the wheel.

When this is done, the car changes the color of the dashboard and makes you feel a little more in a sports car, however, the truth is that when the engine is forced to stay in the upper zone of the rev counter, the car significantly increases the fuel consumption. fuel and, although both its frame and structural rigidity do not leave it badly stopped, we do not feel comfortable operating under that regime, so if you dream of trying to reach the 23.53 kilometers per liter that the technical sheet presumes on the highway, do not it will be with this driving mode that they will achieve it.

On the other hand, if we are in the city or by plane we want to enjoy the journey, we can take advantage of other details such as the other driving modes: Normal, Eco, Sport, Smart, to the USB fast chargers, located on the front and rear, to Android Auto and Apple CarPlay connectivity and to the infotainment system interface.

In safety, among the equipment that it includes are the six airbags and the list of electronic assistance, which are complemented by a good assembly, round off a solid proposal that claims to be one of those that offer one of the best cost-to-cost ratios. benefit that there is in the Mexican market.

For many people, the popularity of small trucks has put sedans in check, however, Kia’s bet is based on making these vehicles attractive cars that connect with their owners and at the same time offer them a series of attributes that solve their day-to-day with safe, well-equipped and versatile cars that are a pleasure to show off and also offer a handling so that those who really like to drive, enjoy it to the full.

A graduate of Televisa’s CEA, winner of the Golden Trilogy in 2019 as host and revelation actress of the year, in 2019 the Venezuelan actress participated in the telenovela Cita a ciegas as Beatriz. Currently, Thaydali is the host of the Qué News Bandamax program, where she presents the best exclusives from the Mexican region.

I loved the Kia Forte, its exterior design caught my attention, it looks very futuristic, very sporty, but at the same time youthful, in addition the color it wears suits it very well, inside it is a very comfortable and spacious car.

I really liked the dash screen, it is the perfect size to use and it looks very technological, and the sound is very good, I can also connect my phone with the connectivity it has. I think it is a perfect car for those who drive in the city, but who also escape with friends or family from time to time to other places and take the road.

And the best thing is that it is a car with an engine that pushes hard, but that does not use as much gasoline and that it is made in Mexico, and I think that, with those qualities, it would be an option that I would think about when choosing a car. “

We invite you to see our content in networks of:

Copyright law strictly prohibits copying all or part of Excelsior’s materials without first obtaining written permission and without including the link to the original text.