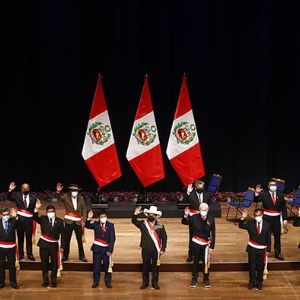 The new president of Peru, Pedro Castillo, swore in the ministers who will be part of his ministerial portfolio on Thursday night in the country’s capital.

President of Peru is symbolically sworn in Ayacucho

During the act at the Gran Teatro de Lima, the Peruvian president said that the cabinet belongs to the people and will defend the rights of the majority of Peruvians.

Pedro Castillo highlighted that the commitment of his portfolio is to build a more just, free and dignified country.

Our cabinet belongs to the people, it is due to the people and it goes to them. Our commitment is with Peru and with no other interest than to dedicate each and every one of our efforts to building a more just, free and dignified country. We will not disappoint your trust. pic.twitter.com/U3UMsQ5B8c


The highlight of the list of ministers is their marked political character, with the presence of several deputies, former deputies, former presidential candidates from left-wing parties and even Castillo’s own vice president, Dina Boluarte, who will occupy the Development portfolio and Social Inclusion.

Among the appointments stands out that of the new head of Foreign Relations, Héctor Béjar, an 85-year-old lawyer and doctor in sociology, who founded the National Liberation Army in 1962, an insurgent group inspired by the Cuban Revolution.

The post of Minister of the Interior will be held by Juan Carrasco, an anti-corruption prosecutor from the province of Lambayeque, while the Health portfolio will be in the hands of Hernando Cevallos, doctor, former congressman of the leftist Frente Amplio party and for weeks spokesman for health issues from Castillo.

Juan Cadillo, a young independent teacher recognized as one of the best infant teachers in the world for his use of technologies for training, was appointed Minister of Education.

The former deputy of the Broad Front, Iván Quispe, will be Minister of Production, while Roberto Sánchez, congressman and president of the moderate left party Together for Peru, will occupy the Foreign Trade portfolio.

Ciro Gálvez, former presidential candidate of the Runa indigenist party, will assume the Ministry of Culture.

The ministries with a more technical profile such as Agrarian Development, Labor, Energy and Mines, Housing and Environment, were occupied by low-profile and practically unknown officials or technicians.

The appointments of the ministers of Economy and Justice, who were originally going to be assigned, the economist Pedro Francke and the jurist Aníbal Torres, the main lawyer who faced the maneuvers used to hide the electoral victory of Castillo, were pending.

In his first speech as president, Castillo announced that he will send to Congress a bill to reform the Constitution in force since 1993 by former President Alberto Fujimori.

Pedro Castillo began his five-year term in the midst of the hopes of thousands of compatriots, but also the concern of many Peruvians who fear a sharp turn towards socialism after decades of liberal policies.