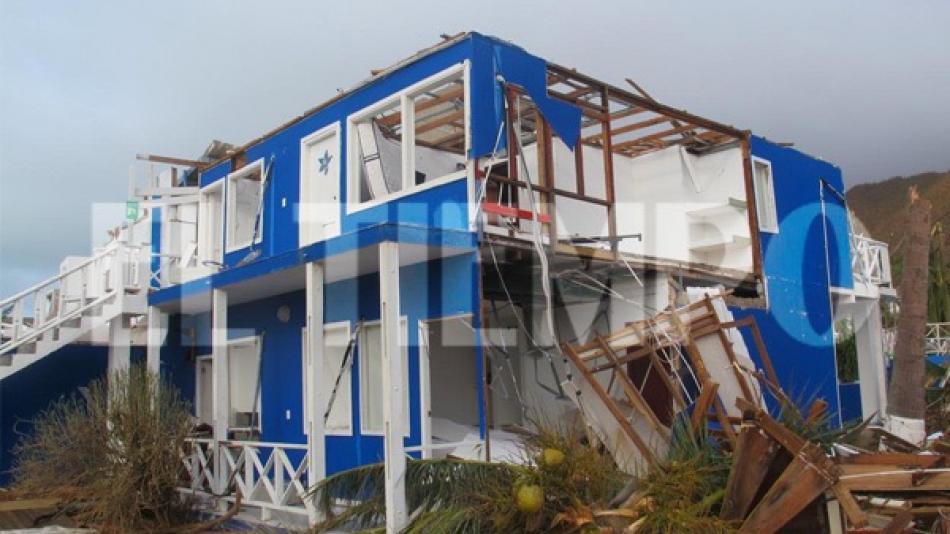 EL TIEMPO had exclusive access to new photographs that show the magnitude of the disaster left by Hurricane Iota on the island of Providencia, the most affected island in the archipelago.

The hurricane, the first category 5 to hit the country, affected the three islands with a population of about 65,000, leaving thousands of them homeless and with incalculable losses.

The images were taken by foreign tourists this Monday, November 16 after the natural phenomenon that caused the death of two people and dozens of injured, according to official information.

In the photographs you can see the different damages to the infrastructures, as well as the rubble and fallen trees that, from the beginning, made it difficult to move around the island. In fact, very early on Tuesday, residents reported that the roads were blocked and that it was only possible to access from the center of the island to the San Felipe sector by moving fallen trees.

This newspaper recently spoke with Allen Jay Stephens, governor in charge of San Andrés y Providencia, who described the damage suffered, especially by the island of Providencia, as “shocking”.

(Further: ‘It is unlikely that a hurricane will hit La Guajira’: Experts)

“We are talking about a community of about 6,300 inhabitants and some 1,600 homes settled in that municipality, of which 98% are destroyed, and only the remaining small percentage can be recovered or improved, “said Jay.

After recovering from the panic caused in the early hours of Monday by the fury of the hurricane, the victims help each other while the Government tries to bring humanitarian aid to all.

Such was the magnitude of the catastrophe that this Wednesday President Iván Duque declared a disaster situation in the archipelago for a year, a standard with which it hopes to mitigate the effects of the emergency, assist the affected population and restore health, energy, communication and water services.

(It may interest you: Ola winter leaves some 59 thousand families affected in the country)

In the words of the governor in charge, in Providencia “the situation demands a total reconstruction”. And it is that although Iota caused great material damage in San Andrés, such as damage to houses, poles and felled trees, because it is located further south of the hurricane’s route, the impact was less than in Providencia.

Jay also responded, if the tragedy that the archipelago is facing, already classified as the worst in its history, could have been avoided.

(We recommend: Iota and the worst natural disasters in the history of Colombia)

“These are situations of nature. I do believe that there are things we must learn from this experience. Natural phenomena cannot be avoided, but we do have to work on the issue of planning, prevention“he said in an interview with this newspaper.

The governor in charge also referred to the alert issued this Wednesday by Ideam in relation to a possible new storm of great proportions near the La Guajira peninsula, which could eventually affect the Caribbean region.

As reported by Ideam, this is due to the formation of a new tropical wave – the phenomenon considered the ‘genesis’ of hurricanes – in Venezuelan waters and which could continue its course towards the Colombian Caribbean.

(Further: San Andrés and Providencia live the worst tragedy in their history)

“It is a tropical wave that has been developing in recent days. It went from a development probability of 20 percent to 40 percent. However, we have the good news that in the last hours it lowered its probability to 30 percent”, Said Yolanda González, director of Ideam.

But Governor Jay said, “To date, Ideam has not given us notice that another hurricane is coming into the department.” Of course, he added: “We consider that the priority is our community and we have to look at what immediate actions we can take to serve it.”

President Duque arrived in that region on Tuesday, burdened by the historical neglect of state institutions, who then traveled again from San Andrés to Providencia.

Iota broke into that paradise island on Monday and it wiped out almost all of its infrastructure, leaving only rubble, fallen trees, several injured and dilapidated houses in its wake.

To face the emergency, the president announced that the authorities will focus first on delivering humanitarian aid, removing debris, cleaning the area, offering health care, and restoring communications, the flow of energy and the supply of water.

(We suggest you read: Tragedy by flood in Cúcuta: six dead and eight missing)

The president launched a 100-day reconstruction plan, although he did not rule out that said time would be extended given the level of affectation suffered by the islands.

According to Duque, the priority of his Government in the coming weeks will be to provide humanitarian assistance to the victims, “to deploy the largest number of tents for the protection of families, with their respective mattresses”, as well as to deliver medicines and food kits and hygiene.

San Andrés, Providencia and Santa Catalina, which make up the only insular department in Colombia, located off the coast of Nicaragua and more than 700 kilometers from mainland Colombia, are a sensitive territory due to the helplessness in which its inhabitants have lived for decades. and for the claims of that Central American nation on the islands.

ELTIEMPO.COM
* With information from EFE