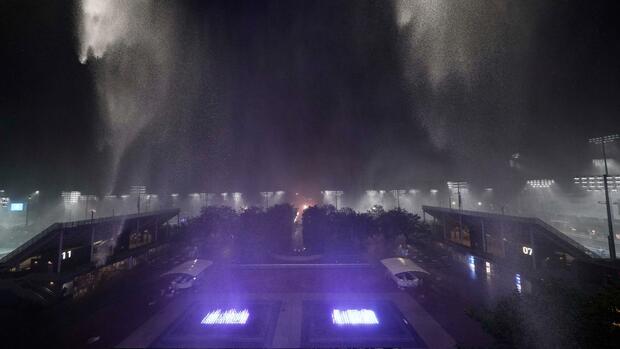 New York The end of the hurricane “Ida” brought the metropolis of New York the heaviest rain since records began. Within just an hour, around 80 millimeters of rain fell in Central Park in Manhattan, according to the National Weather Service.

The storm pulverized the previous record that tropical storm “Henri” had set just over a week ago with 49 millimeters for 60 minutes. Overall, the summer of 2021 in New York is not only very hot and sunny, but also the rainiest in New York history.

New York Mayor declared a state of emergency: “Tonight we are witnessing a historic weather event with record rains across the city, brutal flooding and dangerous conditions on our streets,” wrote Bill de Blasio on Twitter. People should seek shelter in houses and not go out into the streets to allow rescue workers to do their job.

“Stay away from the subway. Stay away from the streets. Don’t go into this severe flood, ”continued de Blasio. Around 5300 customer households are without electricity. It was initially unclear whether people were injured or killed in the storm.

On Wednesday evening, the authorities in New York and the surrounding area warned of severe storms, life-threatening floods and even tornadoes. A short time later, so much rain fell over the city that streets turned into rivers and people sometimes stood knee-deep in the water. All subway lines had to stop working in the meantime – many people were stuck in the wagons.

A video by Unicef ​​spokesman Joe English showed Queens Boulevard in the district of the same name, which was so flooded that passengers had to get on the seats in a public bus: “Queens Boulevard in Maspeth / Corona is literally a river at the moment. Bus flooded with water, several cars got stuck in the water. Absolutely crazy, ”wrote English on Twitter. Even in a subway station, water penetrated with the force of a spring tide, as pictures showed.

The extreme weather also hit the US Open, which is currently taking place, and the German tennis player Angelique Kerber, whose game has been postponed. In the Louis Armstrong Stadium, where Kerber was to play her second round match against Anhelina Kalinina from Ukraine on Wednesday evening, it rained so heavily from the side, despite the roof, that the game had to be suspended indefinitely.

The area in Flushing Meadows was also partially flooded, so that thousands of visitors either had to seek shelter or wade through the water.

More: One million households without electricity – industry still breathes a sigh of relief after Hurricane “Ida”