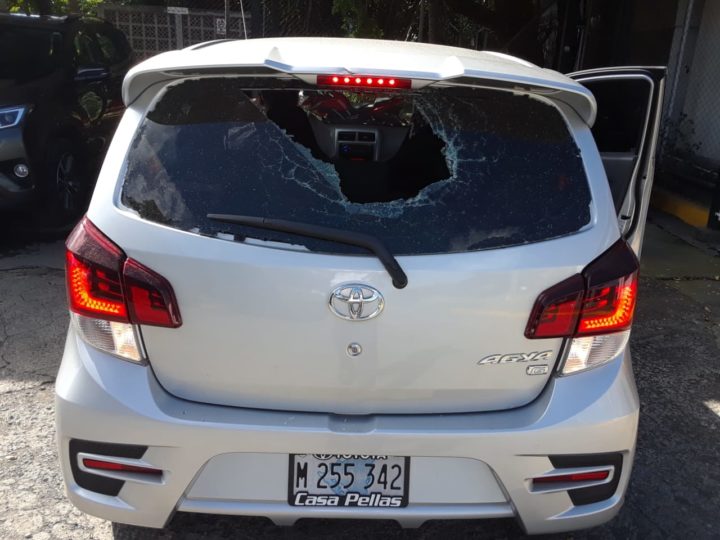 Frances Robles, a New York Times journalist, was covering the departure of Father Edwing Román along with the relatives of political prisoners who were on a hunger strike inside the San Miguel Arcángel church, in Masaya, on November 22. She was attacked by a mob.

That group of orteguistas put her on the ground to try to steal her phone and, later, to throw a stone at her that destroyed the rear glass of the vehicle in which the correspondent for Central America, the Caribbean and the Florida of the American environment was mobilized.

It may interest you: CPJ demands reopening of Venepress and Telecaribe and stop harassment by independent media

Robles had already been attacked a day earlier. The first time it happened outside the San Juan Bautista church in Masaya. A woman, who was part of the mob from Ortega who tried to break into the temple while celebrating mass, was angry with her because she was taking photographs.

“She hit me, taking the glasses off my face and the phone out of my hand,” said the journalist.

That same woman saw her on the cover at the San Miguel church. Robles heard people shout “It’s her!”, “Get her out of here!”, Referring to the journalist. Two policemen escorted her to one of the checkpoints, located about a block from the church, and left her alone, “in the hands of the mob that was coming for me,” she said.

“A group of people surrounded me, demanding that I hand over my phone. Several women threw me to the ground and fought with me on the phone. I yelled: Policía Police! Police! ’Because I knew the officers were only a few steps away, but no one came to help me,” the journalist said.

One of the women reached into her bag and grabbed what she considered to be her phone, but it was a portable charger. The attack ended because the women thought they had their cell phone and during those seconds, Robles managed to escape.

“I rushed into the rental car and someone threw a large stone, breaking the glass of the car,” he says via email.

Despite the fact that there were hundreds of policemen in the place, the same ones who did not allow anyone to approach the temple, in which 14 people remained without water and electricity, including Father Román himself, they left women sympathizers of the Ortega regime to act with impunity against the journalist.

Robles lived for a year (2001) in Nicaragua and, since then, has returned to the country many times and nothing had ever happened to him before. He has been a journalist for thirty years and the last two assaults were the only incidents he has experienced while doing coverage.

Robles’ case was also exposed in a report published in The New York Times on Thursday, in which he recounted the ordeal that the relatives of political prisoners lived inside the church in Masaya, under the imposed state of police and parapolice siege.

The assault on Robles is one of the risk situations that independent journalists face in the exercise of their profession in Nicaragua.

According to the Independent Press Freedom Observatory in Nicaragua, of Independent Journalists and Communicators (PCIN), in the last three months, 33 cases of journalists have been documented in which there were 120 crimes that violate press freedom and access at the information.

Journalists have been victims of threats, harassment, assaults, theft of equipment, arrests, obstruction of their work and harassment.

In 21.6 percent of the identified cases there were threats, followed by harassment and obstruction, which was present in 20.8 percent of the cases, respectively. The data was exposed by PCIN this Thursday. In the report they also emphasized impunity in the face of attacks on life, judicial siege, discredit campaigns, in addition to the illegal arrest of journalistic teams by Ortega police and parapolice.

For Robles, there is no doubt that journalism is very difficult today in Nicaragua.

“Pro-government groups seem very determined not to allow anyone to take photos or videos. They are stealing the cameras of the journalists as if taking photos on the street, covering the news, was a crime, ”he said.

According to the monitoring of the Violeta Barrios de Chamorro Foundation, from April 2018, when the sociopolitical crisis broke out in the country, until June 2019 there have been 1,378 cases of violation of press freedom.

To this are added that the facilities of the Confidencial, Esta Semana, Esta Noche media and the 100% Noticias channel are still taken by the Orteguista Police, after a year. Its owners, journalists Carlos Fernando Chamorro and Miguel Mora, have denounced these violations in national and international instances.

THE PRESS adds 69 weeks of having its raw material and paper withheld by a customs blockade.

See Also:  Victoria's partner is arrested; "had abuses on her and her daughters": governor of QRoo

In the report of the Observatory of Independent Press Freedom in Nicaragua, of Independent Journalists and Communicators (PCIN), 13 cases of documented attacks on female journalists were identified.

Of these, in four of them, attacks identified as sexual violence were committed, expressed in acts of blackmail, groping, threats of rape, harassment, harassment, cyberbullying and cyber-stalking. “These crimes were carried out by paramilitaries, public officials, parapolicies, fanatical supporters of the government party, and national police officers, against women journalists, and occurred while they were carrying out journalistic work,” the report states. One of the most recent attacks was against journalist Kastalia Zapata, from Channel 12, who was robbed by three police officers.