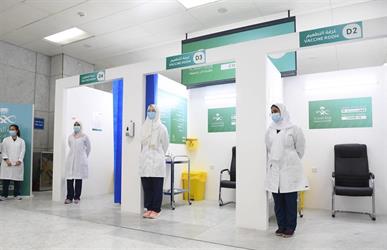 Some centers receiving anti-Coronavirus vaccines in the Kingdom have ended providing their services, coinciding with the absence of the need for them.

A member of the health assembly in the eastern region, Huda Al-Muhaini, said in an intervention on Al-Arabiya channel, that the closure of some sites came after the eastern region reached advanced stages of those who received the vaccine.

Sources said that the closure of these centers came after the proportion of the fully immunized people reached about half of the Kingdom’s population.

She explained that the other centers will continue to receive those who have not received vaccine doses aged 12 years and over, in an effort to immunize more than 70% of the population and achieve community immunity.

Television footage showed the closing moments of the vaccination center of Prince Muhammad bin Fahd Hospital in Qatif, after the end of its mission.

Minutes before closing. #fourth _ bulletin It is located in the vaccination center of Prince Muhammad bin Fahd Hospital in #Qatif @Brothers_Official pic.twitter.com/T58W5dZNAi