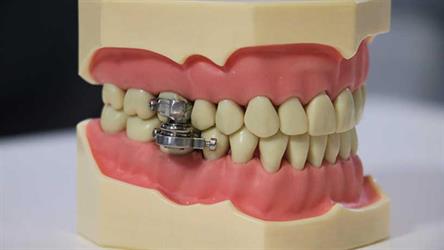 Researchers and experts have created a device to lock the teeth that helps obese people lose weight, the idea of ​​which is to enable them to open the mouth with a small distance that allows the entry of fluids only.

The researchers pointed out that this device was invented for people who suffer from obesity, and all their attempts to lose weight or the diet they followed failed to achieve the desired positive results.

The researchers said that the device, called “DentalSlim Diet Control”, is a small magnetic lock, which is installed by a specialist on the patient’s upper and lower teeth, allowing the mouth to open only 2 millimeters.

They added that the device will not affect speech normally or breathing, noting that the participants in the experiment lost about 6 kilometers on average per week and were excited to continue the experiment.

They pointed out that the device is a good alternative to surgeries that some resort to to lose weight, as it will force them to follow a harsh diet for a specific period, without having to perform operations that may cause serious health complications.