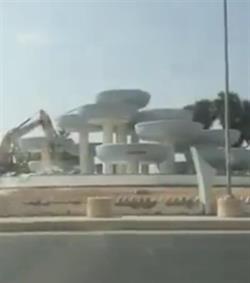 Work has begun to remove the “Bay’a Square” model, as part of improving public facilities in the Historic Jeddah Development Project.

The Allegiance Square was built about 59 years ago, as it was given this name after the people of Jeddah pledged allegiance to King Faisal in 1384 AH.

Historian and researcher Khaled Abu Al-Jadayel said that what has been said about the existence of this anthropomorphic since the era of King Abdulaziz is incorrect, pointing out that in the forties of the Hijri it was a site for the rise and landing of planes.