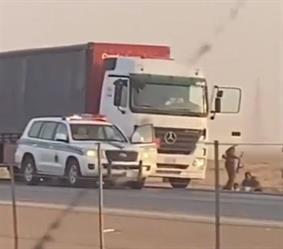 On Tuesday morning, the Special Forces for Road Security managed to stop a truck driver who was traveling in the opposite direction on the Riyadh-Qassim road.

The photographer of the clip, Muhammad Al-Matroudi, explained toNews 24“, that the incident was on the track heading to Qassim, stressing that the vehicles of the road security forces were able to corner the truck driver while he was walking and stopping him.

The clip showed the road security vehicles tracking the truck, which was traveling at high speeds in the opposite direction, while the drivers of the vehicles avoided the truck to get off the road, and it was eventually forced to stop near Tamir Governorate.