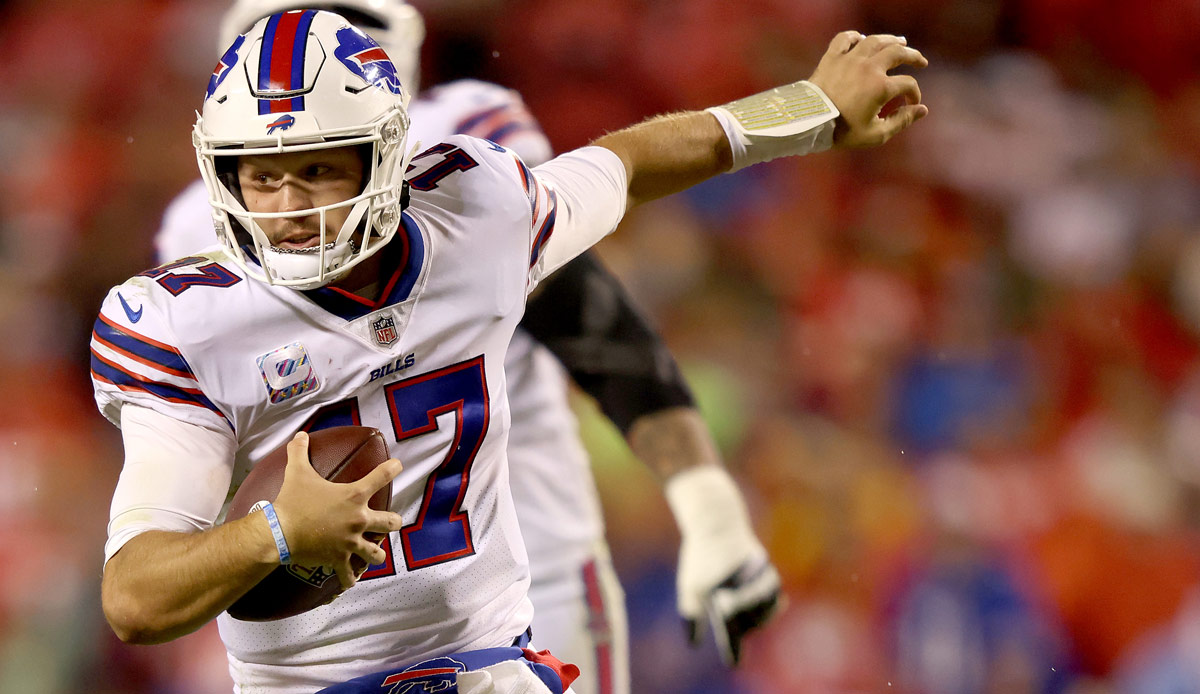 The Buffalo Bills won the rematch of the AFC Championship Games in January against the Kansas City Chiefs with 38:20. Josh Allen and Co. took advantage of every mistake ice cold, while the home side once again had no access to defensively.

Superstar QB Patrick Mahomes, who made very unusual mistakes, said self-critically after the defeat: “It starts with me. Something like this has not happened to me regularly in my career. I have to reassess where I stand and what decisions I meet.”

The Chiefs got off to a good start, opening the game with a drive that lasted 17 moves and almost seven minutes. In the end, however, there was only a 38-yard field goal from Harrison Butker. The Bills then responded with a significantly faster drive and a touchdown – Josh Allen himself ran to a 9-yard score.

Byron Pringle lost a fumble on the subsequent kick-off return, but the Bills ultimately made nothing of this gift, as a somewhat petty holding penalty against left tackle Dion Dawkins erased a run from Zack Moss to just before the end zone. After a grounding penalty against Allen, the guests were finally forced to punt.

Another long drive followed by the home side – this time for almost eight minutes (12 moves). In the end, Mahomes found Pringle for a 5 yard TD. In return, things went quickly again. After a pass to Moss for 24 yards, Allen finally fired a 35-yard touchdown pass to Emmanuel Sanders for the renewed Bills lead. They later scored a field goal and then another touchdown after the Chiefs stopped at 4th Down – Allen to Dawson Knox over 53 yards. The Chiefs then managed a field goal until the break – break time: 24:13 bills.

Thereupon there was a lengthy interruption – a storm ensured that nothing went on at Arrowhead Stadium for over an hour and ten minutes. It was not until after 11 p.m. East Coast time that it finally continued.

Chiefs vs. Bills: Porters start after an extended break

When it finally went on, both teams needed a little bit to get going again, accordingly the second half began with a few unsuccessful attack series before there was the first big play of the second half: Mahomes threw a somewhat imprecise pass towards Tyreek Hill on a crossing route. The ball slipped through his hands and into those of Safety Micah Hyde, who then marched straight over 26 yards into the end zone – Pick-Six!

The next drive led the Chiefs to Hill and tight end Travis Kelce in the red zone thanks to a few complicated throws, but it didn’t bring any points – Mahomes tried a pass to the side, edge rusher Gregory Rousseau hit the ball on the line Breath and then snatched the interception himself. After all, the Chiefs got the ball back shortly afterwards, as the defense made a quick stop.

This time KC found its way to the end zone. Shortly before the goal line, they bet on a diamond formation with four receivers on one side – Mahomes finally found Kelce for a shovel pass TD from a yard. And for a short time it even looked as if the Chiefs should regain possession of the ball – Allen threw an interception to Rashad Fenton – but Frank Clark was punished for Roughing the Passer, a decision that at least seemed questionable at times.

Buffalo gladly accepted this gift and turned it into the decisive drive of the game. With his own runs and a touchdown pass to Sanders, Allen finally restored the old lead – 38:20 with under six minutes on the clock. When Mahomes then slipped through a snap in the opposing half and Tre’Davious White conquered the fumble, the game was finally decided.

To make matters worse, Chiefs running back Clyde Edwards-Helaire injured his knee during the game and had to get out early. At the very end, Kelce also sustained an injury. Both are still pending diagnoses.

Chiefs vs. Bills – the most important statistics

The star of the game: Josh Allen (Quarterback, Bills)

What was Josh Allen (15/26, 315 YDS, 3 TD / 11 CAR, 59 YDS, TD) missing from the absolute quarterback elite? For example, a win over Patrick Mahomes. He has now succeeded in doing this very convincingly. With his arm, but also with his legs, he extended drives, keeping the Chiefs offense off the field and causing touchdowns. The bottom line is that he hardly made any mistakes and took advantage of the numerous mistakes made by the Chiefs Defense. A strong idea.

The flop of the game: Defense of the Chiefs

Chiefs defense is generally a big problem these days. That ran through this game too, because this unit was only very rarely able to find an answer to the Bills game. They couldn’t get the run under control anyway, but they couldn’t see any land through the air either. The front rarely put pressure on everyone – only 4 pressures were recorded – and behind that there were too often blatant gaps and sometimes completely sunk coverages like the long touchdown passes before the break. In this condition, the offense has to play almost perfectly. And that wasn’t the case that evening.

Analysis: Chiefs vs. Bills – the tactics board