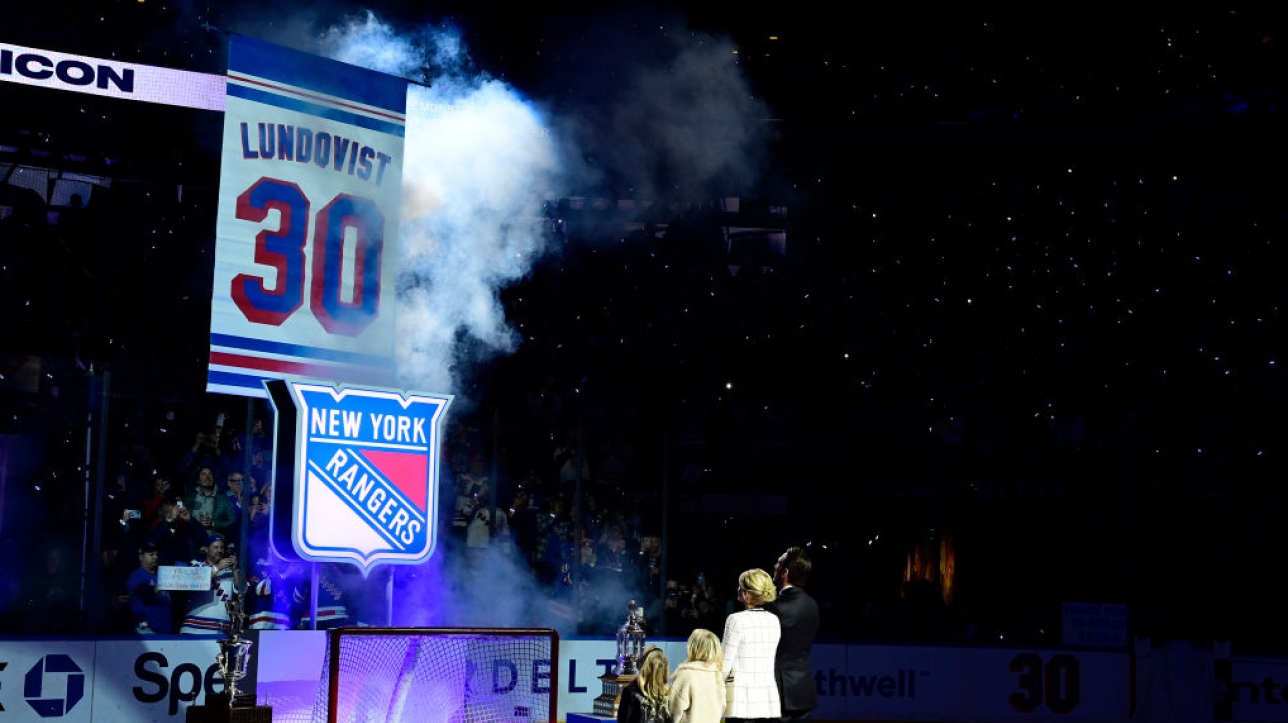 The “King” has brought his throne to the heights of Madison Square Garden.

Henrik Lundqvist became the 11th New York Rangers player to have his number retired when a banner with his name and No. 30 was raised ahead of the team’s matchup against the Minnesota Wild on Friday. The Wild spoiled the party with a 3-2 win.

The Swedish goaltender has played every game of his 15-year NHL career with the Rangers. The club selected him in the seventh round of the 2000 draft and he posted a career record of 459-310-96, with a 2.43 goals-against average and a .918 save percentage.

The 39-year-old goaltender, who has been a New York favorite since his debut, received a standing ovation from the crowd, who chanted “Hen-rik!” Henrik! when he arrived on the blue carpet that covered the ice.

“When I think back to my 15 years here, what gives me the most satisfaction is not the victories or the personal honors, but really the dedication,” Lunqvist said. The dedication I have shown for the Rangers and the dedication they have shown me for so long. »

The Swede experienced great emotions during the ceremony as during his career which lasted from 2005 to 2020. “This roller coaster of emotions is probably something I will never forget”, he said. mentioned about his matches before adding with a laugh: “and probably my wife won’t forget it either”.

“I’m honored to have this moment and I especially appreciate being able to thank you all,” added Lundqvist, addressing the fans.

He defended the net for Rangers 887 times in his career, winning 459 of those encounters. He also had 64 shutouts during his career.

He explained that he had lived his years with the Rangers intensely. “The highs were very high, and the lows very low, but that’s how I lived. Was it good as a way of life? When we won yes, ”he continued once again, raising a few laughs in Madison Square Garden.

He is estimated to have stopped an impressive 23,509 shots.

“What I remember is above all my commitment to the New York Rangers and their dedication to me,” he said.

“When I think about my career, one word comes to mind: gratitude. The one shown by the Rangers organization to me, and yours, ”said the Swede. He also took care to thank his former goalkeeper coach Benoit Allaire for all the work he did with him over the years..

He currently acts as an analyst for the MSG network for Rangers pre-games and post-games.

Lundqvist is the first Rangers player to have his number retired since Hadfield on December 2, 2018.

The Rangers have also collected several testimonials to honor their former goalkeeper.

“It was a pleasure to play alongside you, to be your friend. No one deserves it more than you, you are a true Rangers legend. I hope you and your family will enjoy it today,” said Mats Zuccarello, who played with Rangers from 2010 to 2019.

“You played at the highest level all these years and it was a privilege to be one of your opponents. We had good battles along the way, but I have a lot of respect for you as a goalkeeper and as an individual,” Sidney Crosby said.

“I couldn’t be more proud to have been your teammate for 11 seasons. You have done so much for me, both on and off the ice,” said defenseman Dan Girardi.

The Wild played spoilsport on the ice once the game started. It all started for the best for Rangers who were leading 2-0 after 20 minutes. After Barclay Goodrow, Chris Kreider hit the target for his 31st goal this season.

Goal denied to Rangers late in the game

Kevin Fiala, however, closed the gap to one goal in the middle period and less than two minutes later, a former Lundqvist team-mate acted up. Zuccarello scored with a slap shot on the power play to tie the game. Frédérick Gaudreau put the Wild in charge early in the third period.

Ryan Strome thought he had tied the game with a second left in the game, but officials ruled he pushed on Cam Talbot’s pad and that’s how the puck crossed the red line. The goal was disallowed which had Rangers head coach Gerard Gallant in a frenzy.

Despite the arguments, the score remained and the Rangers ended this evening of celebrations on a false note.

After a great career, it’s finally tonight that the legendary Henrik Lundqvist’s sweater will be hoisted to the heights of Madison Square Garden 💙💛 pic.twitter.com/TVyMQASHMF

You are crying! Player is “reunited” with his deceased girlfriend thanks to Forza Horizon 5