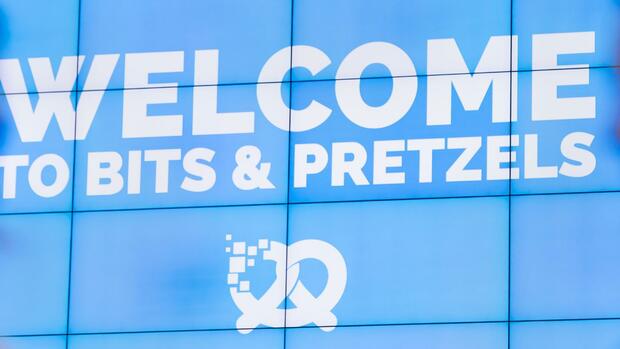 This year the conference will take place digitally.

Hamburg One thing was already clear before Barack Obama even took the stage in the Munich exhibition hall last September: the organizers of the Bits & Pretzels start-up conference would have a hard time topping the enthusiasm. For 2020 they would have to come up with something special.

At that time, it was not foreseeable how difficult it would really be for the event organizers Andreas Bruckschlögl, Bernd Storm van’s Gravesande and Felix Haas in view of the corona pandemic. Instead of new highlights, even previous trademarks are canceled, especially the joint visit to the Oktoberfest, during which the usually three-day event takes place. Bits & Pretzels will now take place entirely digitally from September 27th to October 2nd.

Nevertheless, the conference should offer an experience. “Just watching hours of presentations in the video stream – we wouldn’t be interested in that either,” said Haas shortly before the conference started.

This is also the lesson from a short-term test run in lockdown at the end of March. At that time, Bits & Pretzels invited many prominent guests to a virtual founder’s breakfast. One observation: after six minutes of speaking time, many users switched off. The presentations are now limited to six to ten minutes – even for high-ranking speakers such as ex-Google boss Eric Schmidt or basketball legend Dirk Nowitzki. “The conference should be such that we would like to participate ourselves,” explains Haas.

“Lectures in digital format have to be much shorter than in a face-to-face event,” confirms Jörg Schüler from the Dresden consulting firm Hightech Startbahn. He is currently preparing the High Tech Venture Days, which will take place in Dresden in October. For this meeting of start-ups and investors, he is expanding the digital conference days – using specially adapted conference software. “What works really well is digital matchmaking,” he says. The parties could arrange meetings digitally in a much more targeted manner than at the local coffee bar. However: The informal chat between the investors is canceled this year – at least for those who are not on site for the preceding conference day in the Gläserne VW-Manufaktur travel to Dresden.

The three Bits & Pretzels makers want to solve this dilemma virtually: “I am particularly looking forward to trying out our Business Lunch Roulette with all the participants,” says Bruckschlögl. People are switched together at random – like in the video service “Chat Roulette”. The 31-year-old is hoping for interesting chance encounters.

The most important part of the program takes place in the evening so that users can participate after work. Accordingly, the conference will be extended to six days. The Dresden organizers are proceeding in a similar way: They also expect that people in the home office or on the computer will not reserve entire days for the event.

Bits & Pretzels should still pay off. On the one hand there are no costs for halls and catering, on the other hand, according to Haas, the sponsors have largely stayed on board. There were also noticeable costs for a virtual event, says Haas. The participants should therefore also pay – between 169 and 259 euros. There is already a four-digit number of registrations, and more tickets are to be sold during the conference.

The makers were able to keep their ten-strong team like this. In contrast to other organizers, there was only a few weeks of short-time work. However, all of the ideas could not be implemented: Initially, the organizers had announced that they wanted to broadcast from studios in several global metropolises. The pandemic situation thwarted the plan.

Instead, the event generates an additional source of income: the “Mingle Cloud” conference solution, developed together with the Munich software house Mayflower, is to be marketed to other organizers. “Our technology for virtual events is now a new business model for us,” says Haas. Messe München, which holds ten percent of Bits & Pretzels, has already implemented a virtual edition of the Ispo sports fair with the system. “From one day to the next we had to think like a software company,” adds 45-year-old Storm. It helped that the three conference founders manage start-ups full-time themselves.

Storm has been head of the Allianz founding Iconicfinance, which develops the Heymoney financial app, since the beginning of the year. Previously founded the former Fujitsu-Manager among other things Aboalarm and Finlytics.

The 39-year-old Haas, on the other hand, founded IDNow, an online identification service. He is also active in the Flex Capital venture capital fund, which wants to invest in medium-sized software companies. Bruckschlögl co-founded an agency for social media marketing. His other company, Ryte, founded in 2012, optimizes websites.

The three do not expect a complete return to the old concept for their conference. In the corona crisis, video conferences have become so normal that hybrid event concepts will become the rule even after the end of the pandemic, they expect. The only thing they don’t want to do without again is Oktoberfest if possible.

More: This is how the Bits & Pretzels founder’s breakfast went