“Ginny & Georgia” was the sensation hit on Netflix that year. In the USA in particular, the series overshadowed all other series starts and held the top position of the most popular series for 27 days. A second season has long been announced for 2022. The series is definitely worthy of criticism.

“Ginny & Georgia” is the story of 15 year old Ginny and her 30 year old mother Georgia. The family also includes Ginny’s little (step) brother Austin. Together they lead an unsteady life with constant changes of residence. However, after Ginny’s stepfather dies, it’s time to finally put down roots. Hardly any other place seems more suitable for this than the small town of Wellsbury in New England. Wellsbury is one of those cities where not much is happening. And that’s exactly what the family needs. A boring place where you can go to the cinema at the weekend, enjoy the landscape and watch the world go by in the living room via the internet or satellite TV.

But above all, it is a place where the family can finally experience normalcy. Georgia became a mother at 15. And some things happened during the years of her teenage years that prevented her from leading a normal life. What happened is revealed in retrospect. At some point, however, her life moved in a reasonably orderly path, at least one might think. Until the death of her husband tore another wound. A wound that is now supposed to heal in Wellsbuy. For a fresh start.

At least that’s what the first episode of the series suggests. At the same time, however, it also reveals an unusual mother-daughter relationship. Georgia is pretty. She knows that men consider her attractive, even desirable. And she plays with her appearance, uses it. Looking for a job, for example. Why put shelves in the supermarket when you can also work for the mayor? After all, mayors are politicians and when they go into the election campaign, they not only need arguments, but something too? to look at. With all of this, Georgia always seems immature, very careful about outward appearances. In contrast to Ginny, who with her 15 years definitely represents the more sensible part in the mother-daughter relationship and who appears at her new school as a high-performing, self-confident student who intends to convince with her personality and her intellect.

The brief synopsis naturally brings memories of a highly successful series from the early 2000s to mind: “Gilmore Girls”. The initial situation (mother, in her early 30s, a bit wild and “in need of a relationship”, lives with her sensible teenage daughter in a nice little town) initially seems identical. Now serial storytelling has evolved, in general stories are told in a more dramatic, complex way ?? consequently it needs a dramatic start (the death of the stepfather) and it can be a little more controversial (Georgia’s conscious use of her externality). “Gilmore Girls 2.0” is ready.

It cannot be ruled out that this was actually the thought with which the planning for the series began. But at some point on the development path, the series took an unexpected turn, because at the end of the first part we, the audience, learn that Georgia artfully murdered her husband. 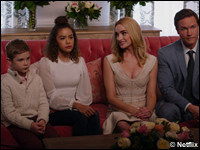 That is the problem with the series that is yet to be talked about. So first of all the positives should be named. Like the dialogues between mother and daughter, which are always polished. And there are the two leading actresses Brianne Howey (Georgia) and Antonia Gentry (Ginny), who play remarkably well. In Brianne Howey’s portrayal of Georgia, Georgia fluctuates between an extremely extroverted being and a surprising immaturity. An immaturity towards her children, whom she faces either as a friend? or as a real mother hen, clutching her and thus preventing her from being able to make her own decisions (that this clinging behavior is basically selfish, will be discussed in the course of this text). It operates between two extremes where a healthy middle would be appropriate. On the other hand, it should be noted that Ginny knows about these extremes. Trying to make the best of the situation? including taking on maternal duties towards her brother. By the way, Antonia Gentry was 22 years old when filming, but there is never a doubt that she is a 15 year old girl.

The tone alternates between drama and ?? absolutely ?? black humor. All of this is staged at high speed. So what is there to criticize about the series, a series that, see text introduction, has been extremely successful for Netflix? 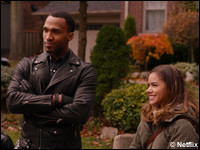 “Ginny & Georgia” has a huge problem with the Georgia figure drawing, which even Brianne Howey cannot cover up. So it is without a doubt amusing to see how this Georgia offensively uses its advantages for its own benefit in a time that claims to have overcome externalities and celebrates diversity. Georgia exposes this social self-certainty as a self-deception through her behavior. Unfortunately, however, the authors do not make a point at this point in the story. Instead of just letting Georgia act as it does ?? because she understood how society works ?? she needs a story that excuses her actions. She needs a reason for what she does. It is not enough to just ?? be ?? allow. So there is her difficult teenage years when she went through some bad things. In dramaturgical terms, trauma is still the easiest way to excuse a character’s actions.

The only problem is that these traumas do not remain a singularity, moments of the past that are closed and from which Georgia has gained experiences for the present and the future. The authors create a world in which dangers lurk constantly for women like Georgia. Where men are generally not good, where people like Georgia who have gone off the track basically have to justify themselves for it all their lives. What does that mean no matter what Georgia does? an apology is waiting for them. To take this idea to the extreme in terms of interpretation: Georgia is portrayed as a victim who only strikes back because she no longer wants to be a victim – which then excuses her murders.

Yes, plural. Not only did Georgia murder her husband, she will commit a second murder over the course of season one. And they are both murders, because both acts are well planned, carried out ice-cold and they are not necessary (necessary in a literary, classical-dramaturgical sense that drives a character into a corner, from which only the ultimate defense enables an escape can). No, the murders are actually the easiest way to get rid of your problems.

Which does ______________ mean, ?? that “Ginny & Georgia” is really a series about a teenage daughter and her killer mother? Well, “Ginny & Georgia” is a bit more, it’s also a coming-of-age series about Ginny. But yes, it is also the story of a murderer who, if she should commit another murder in the next season, can even be called a serial killer. Which, however, the series sees as a kind of minor matter. Yes, Georgia is inclined to radical problem-solving, but understand that, she had a difficult youth.

Let’s put a thought in the room and the series would be “Ginny & George” and George would be an attractive George Clooney of 30 years who is planning a new start for his teenage children, offers himself to a mayoress and who would kill his wife (for reasons which would even be explained in the course of the season): How would such a series be received by the audience? Probably not good. At least not if the tone of the series was the same as that of

«Ginny & Georgia», so thoroughly humorous, sarcastic, always mean. It is not for nothing that the sound makes the music. Music that plays pretty cross here. Furthermore, that Georgia is a terrible egoist who claims to act for her children but really only thinks of herself, even when clinging to herself (the emphasis is on ?? herself ??) … That should only be mentioned in passing, because at least this, the spoiler may be, is actually discussed in the course of the season in the relationship between Ginny and her mother. But that the authors then ?? without a comprehensible reason ?? give Ginny one too, that’s really uncomfortable. Ginny will soon be hooking up with a nice small town boy.

But it’s not that easy. So she has her first sexual intercourse with a not-so-nice boy. Sure, because girls are known to be into the bad guys. You know that, it has always been that way and it will always be that way. As a child of the Ruhr area, one would like to ask the authors around showrunner Sarah Lampert at this point in the story: ?? Samma, do you still have them all ??? Above all, the spoiler is allowed, Ginny’s behavior makes no dramaturgical sense. Here a situation is brought about because, because, because you want to bring it about. Dramaturgy? Meaningfulness? Is overrated.

Honestly: It can be assumed that the makers of this series would claim in conversation that “Ginny & Georgia” is a series about strong women. But it is not. Georgia is completely insane. And Ginny is being dismantled because, because, because that’s how it has to be. There doesn’t have to be an answer to every question.

Of course, this is only the first season of a series, and the ending suggests a break in the Georgia character. It is possible that she will be allowed to be in the second season what she has long been in truth: An ice-cold, brutal, egomaniacal murderess. While Ginny has to make decisions that no teen should be making. If that is the case, of course, it is important to look at the overall picture and this criticism would then be invalid. Unless ?? then not.

“Ginny & Georgia” can be streamed on Netflix.