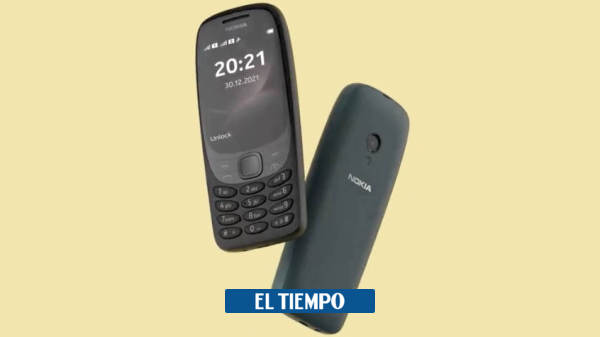 “The return of an icon.”

With that phrase, the cell phone brand Nokia announced the launch of its classic model 6310 in a version that adapts to the modern world.

According to the announcement, made by means of a video For promotional purposes, the device has features such as a long-lasting battery that allows weeks to go without charging and a large, curved screen.

The return of an icon. Presenting the new # Nokia6310, the familiar phone for the modern world.

With a battery that can go weeks without charges, a large curved screen, the classic Snake game and so much more, the # Nokia6310 is a phone to fall back in love with 😍 pic.twitter.com/cUMNbRHyAU

(Read also: These were Apple’s huge profits in the last nine monthss).

This was one of the old models.

As revealed by the company in a statement, the new Nokia 6310 will have all the ‘toys’ of modern smartphones: 4G cover, WiFi, Bluetooth, 8MB RAM, 16MB storage expandable up to 32GB, rear camera and the S30 + operating system.

However, what most excited those who once used the original model was that it returns with the remembered one play of the ‘culebrita’.

Of course, in an improved version and in color.

(Keep reading: Facebook bets on the virtual world with the ‘metaverse’ What is it about?).

HDM Global, the Finnish company that manufactures and markets Nokia cell phones, confirmed that the device will be available in colors such as green, yellow, and black.

Likewise, it is known that it can be acquired worldwide for a price of 40 euros, which is equivalent to a little more than 183 thousand pesos.

Remember that the original phone came out 20 years ago, in March 2001, and it stood out as the first to integrate the Bluetooth connection into its technology.