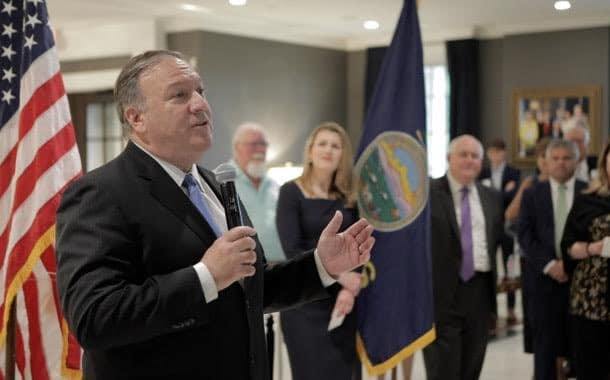 Former US Secretary of State Pompeo (left) has left his post and still has a full schedule. Regarding the Wuhan pneumonia epidemic that is damaging the world, it is emphasized that the current government must track down clearly.Picture: Retrieved from Pompeo Facebook

U.S. President Joe Biden recently ordered to find out the truth about the origin of China’s Wuhan pneumonia new crown virus (COVID-19), which is damaging the world, within 90 days; former U.S. Secretary of State Mike Pompeo also happened to accept the US Fox News According to the interview, he broke the news that not only the U.S. has significant evidence, it can prove that the Wuhan Institute of Virology (WIV) virus came from the Wuhan Institute of Virology (WIV) laboratory. He also broke the news that the laboratory still conducts secret military research experiments, and does not even rule out the possibility of other deadly viruses. Leaked in the future.

The report pointed out that although it is generally believed that this wave of epidemics that severely harmed the global economy and people’s livelihood originated in Wuhan, whether it originated from the vegetable market near the laboratory of Wuhan Institute of Virology or another secret institution has been controversial. The former US Donald Trump not only screamed the “Chinese virus,” but the Trump administration also vigorously promoted the laboratory leak theory, but it was criticized by the media as a “conspiracy theory.”

Now that Trump has stepped down, the voice of doubts about the Wuhan Institute of Virology has been increasing. Especially at the beginning of this year, China blocked the World Health Organization (WHO) expert team from going to Wuhan to investigate the origin of the virus. The WHO report stated that in November of the previous year, many Wuhan virus laboratory workers were hospitalized with symptoms similar to those of COVID-19.

Coincidentally, the British “Sunday Times” also reported that the British intelligence agency believed that the leakage of the pulmonary virus from a Chinese laboratory was “feasible.” They had always believed that the possibility was “extremely low.” It is reported that British intelligence personnel are currently working with the United States to investigate whether the virus has leaked from the Wuhan Institute of Virology.

Pompeo said that since at least 2017, WIV has been engaged in classified research on behalf of the Chinese military, including animal experiments; it is very important for the Biden administration to investigate the origin of the pandemic and the situation at the Wuhan Institute.

He revealed that since the spring of 2020, when he first mentioned this incident, he knew that there was a large amount of evidence that the Wuhan lung virus was leaked from the laboratory in Wuhan. “There are people sick there, and scientists are sick there. We know that they (China) are conducting functional studies-essentially carrying viruses and making them more contagious and possibly more lethal.”

The former U.S. Secretary of State pointed out that the Wuhan virus laboratory is still in operation. He highly affirms that the laboratory’s research is related to the People’s Liberation Army. He pointed out that “the experiment and the military cannot get rid of the relationship.” Pompeo emphasized that the current Biden administration must solve this problem.

Pompeo said that since at least 2017, WIV has been engaged in classified research on behalf of the Chinese military, including animal experiments.