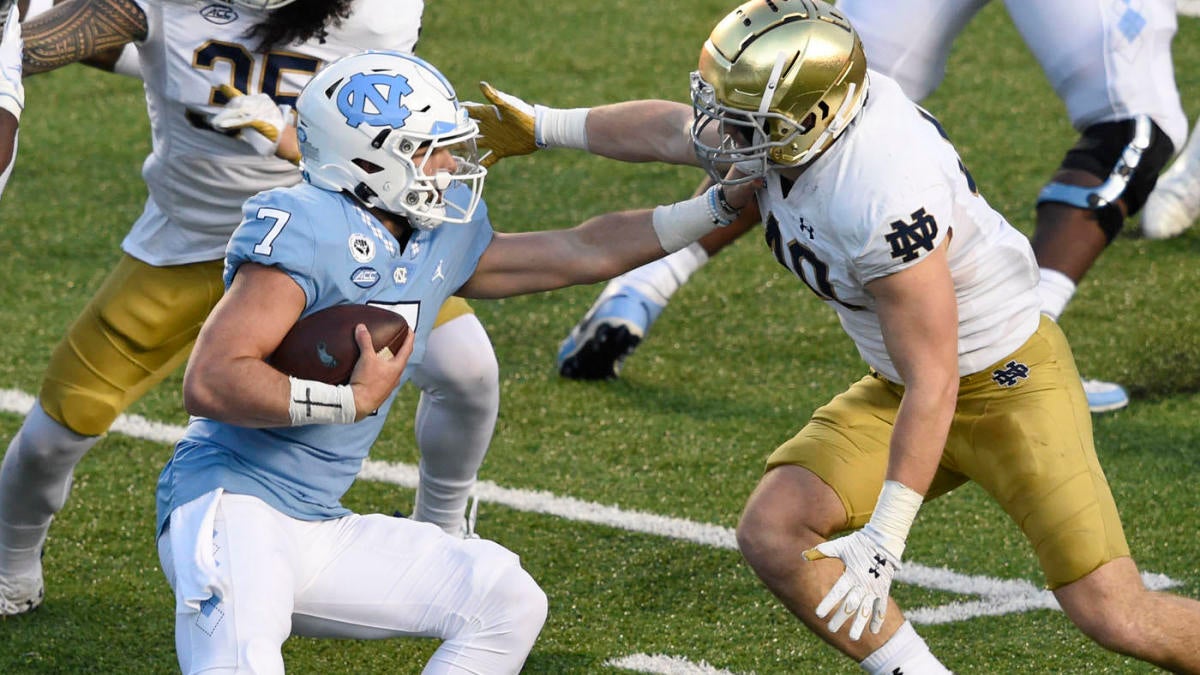 No. 2 Notre Dame passed one of its toughest final tests of the season, stepping up on defense after halftime and riding another stellar performance from Ian Book to a 31-17 win at No. 19 North Carolina.

It was a game that had the makings of a shootout early on, with just one punt and four touchdowns in the first quarter. But that 14-14 start proved to be the turning point in a game that was won on Notre Dame’s terms, relying on its defense and the ground game to lead the way in the crucial second-half possessions that decided the game.

Ian Book completed 23 of 33 passes for 279 yards and a touchdown with 48 rushing yards on eight attempts. In addition to the rushing output, there were numerous plays kept alive by his ability to evade North Carolina defenders in the backfield, extend the play and keep his eyes down the field. Book was so full of confidence that he was pulling off backhanded throws on third down deep in his own territory, providing a “how did he do that?” highlight to his reel of game-changing plays over the last three games.

“It’s just trust, honestly. I’m having so much fun. You don’t want to do that a lot, but I trust Mike [Mayer],” Book told ESPN after the game.

The ground game took charge when it was time to close the win out in the second half, and Kyren Williams finished with 124 yards on 23 attempts with a 47-yard, field-changing scamper perhaps being one of the plays of the game. But if we were to put together the reasons Notre Dame won, they would mostly be thanks to the defense that forced a second half shutout against one of the best offenses in the country.

North Carolina quarterback Sam Howell was limited to just 211 yards on 17-of-27 passing with two total touchdowns (one passing, one rushing), and the Tar Heels offense as a whole was limited to just 78 yards at 3.1 yards per play after halftime. North Carolina’s offense averages more than 550 yards per game but finished with less than 300 yards of offense after getting stuck in the mud during that second half.

All of the best highlights for North Carolina came early, like Emery Simmons going Randy Moss on a touchdown catch in the first quarter.

Notre Dame’s domination of the line of scrimmage after halftime not only highlights its great strength this season but the identity that Brian Kelly and his staff have helped establish over the last four years. Veteran defenders like Daelin Hayes and Adetokunbo Ogundeji have spent years working on their craft and developing physically to the point that they are ready to dominant at the point of attack.

Three things to note about the game:

1. Ian Book should be in the Heisman Trophy race

Sometimes the Heisman voters like to have roles, as if the race for the stiff-arm trophy needs to have different characters on a soap opera. There’s going to be some candidates that have an elite statistical profile, like Florida’s Kyle Trask, but there is room for voters to gravitate towards a candidate like Book who is just a “winner.” Leading one of the last undefeated teams in the country with some of his best football against ranked opponents is a good start, and if Heisman moments are needed, he provided a couple not only with his backhanded pass on third down but with creativity to extend the play on early touchdowns as well.

2. UNC’s defense answered the call, too

The Tar Heels defense has allowed big yardage totals and plenty of points on the season, but it did a good job of holding its own against the Irish as well. Led by Jay Bateman, this is a group that has been inexperienced and a a little banged up through the year. They’ve started to get healthier and more experienced as we’ve entered into this late portion of the season, and it’s worth noting that as its high-powered offense started to sputter in the third quarter, the North Carolina defense did a good job of playing field position and getting the ball back to Howell for more opportunities to score.

3. The path to the playoff

Beating North Carolina moves Notre Dame not only to 9-0 but with two winnable games left on the schedule with Syracuse at home and Wake Forest on the road before the ACC Championship Game. At 8-0 with wins over Clemson and North Carolina, the Irish are one win away from clinching their spot in that championship game and two wins away from potentially holding a top-two spot in the College Football Playoff Rankings on conference championship Saturday. If Notre Dame is undefeated heading into a rematch with Clemson, it has a good chance of being able to hold that top-four status regardless of result based on the current playoff outlook. There’s plenty left to be decided, including those games against Syracuse and Wake Forest, but undefeated on Dec. 19 is a great way to end up in the final four when the selection committee makes its final decisions on Dec. 20.