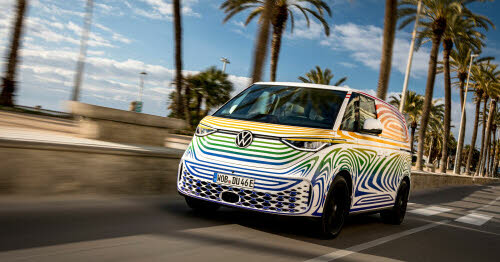 Volkswagen Commercial Vehicles is currently in the final phase of testing the ID prototypes. buzz. The pre-series fleet is currently traveling the roads of Europe. These final tests in real conditions take place between Barcelona, ​​Paris, London, Amsterdam, Copenhagen, Hamburg and Hanover.

The prototypes of the ID. Buzz are now only slightly concealed. It is therefore possible to see that the designers have rigorously transferred the style of the 2017 concept car to the production version of 2022 –.

Both versions of the ID. Buzz are also inspired by the stylistic elements of the legendary T1, the original Combi. Despite all these similarities with its multiple predecessors, the ID. Buzz is without rival: it is a real electric Combi.

Technically, the new range is based on the Volkswagen Group’s Modular Electric Platform (MEB). Both versions of the ID. Buzz are launched this year with a high-voltage lithium-ion battery that delivers an output of 82 kWh. The battery powers a 150 kW electric motor built into the rear axle which it also drives. Its maximum speed is electronically limited to 145 km/h.

With its five seats, the ID. Modular Buzz is suitable for both leisure and professional use. The ID. BUZZ Cargo three-seater marks the launch of a zero-emission van.

The ID. Five-seater Buzz can hold up to 1,121 liters of luggage, even if all seats are occupied. The maximum load capacity of the ID. Buzz Cargo, equipped with a separation, exceeds 3.9 m³.

For ID. Buzz as with all models in the ID. family, software updates can now be downloaded “over-the-air”. This concerns both updates to the infotainment system and updates related to charging or driving assistance functions.

The production of the ID. Buzz will kick off in the first half of this year, with the European launch following later in the fall. The ID. Buzz will also be marketed in the United States, where it will mark the return, from New York to San Francisco, of the range that many American enthusiasts have been waiting for impatiently.

Cuba announces its support for the Russian position