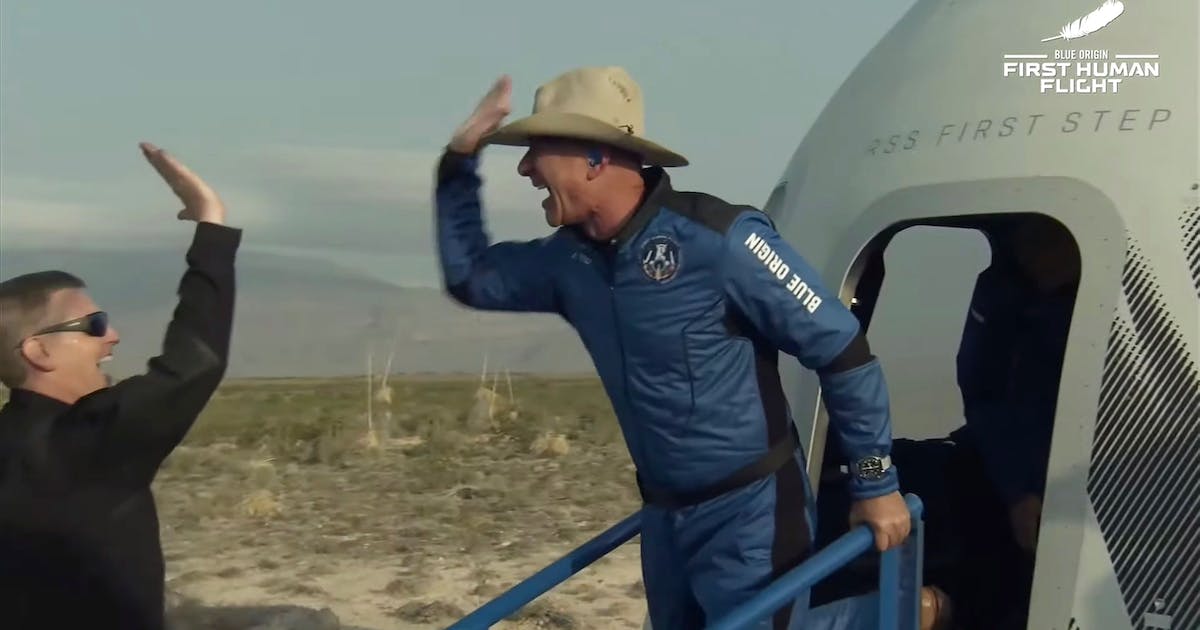 Another billionaire has tested his own spaceship: Amazon founder Jeff Bezos went on a short trip into space with the “New Shepard” – the spaceship had never been tested in a manned environment before.

With a cowboy hat and thumbs up, Jeff Bezos was the first to step out of the space capsule in the morning sun of the West Texas desert – and first of all he hugged his parents. Then the Amazon founder and richest person in the world celebrated the first manned all-excursion of the spaceship “New Shepard” of his company Blue Origin with a champagne shower on Tuesday. The launch in Texas coincided with the 52nd anniversary of the first Apollo 11 moon landing.

Amazon founder Jeff Bezos flew into space with his brother Mark and two other people on board. 82-year-old Wally Funk is now the oldest person who has ever flown into space – 18-year-old Oliver Daemen, whose father gave him the flight, the youngest.

Former US pilot Wally Funk was one of 13 female pilots who underwent the same tests as NASA’s “Mercury” astronauts in the 1960s. In the end, however, the female pilots were not selected because they were women.

The first thing that Daemen hugged after landing was his father, a Dutch investment banker. Funk raised his hands as he stepped out of the capsule. “Oh my God! That was so good! ” Christina Bezos, sister of Jeff and Mark, had reminded her brothers in a speech before the flight how they had always played “Starship Enterprise” as children.

The flight was originally supposed to take off at 3 p.m. Swiss time: the take-off was postponed by a few minutes due to a technical check. The “New Shepard” rockets had previously completed 15 successful test flights into space since 2015. All were unmanned.

After ten minutes it was all over again

The fully automated flight was launched from a company’s own spaceport near the West Texas city of Van Horn. After launch, the spaceship accelerated to around 3,500 kilometers per hour within two minutes. Shortly afterwards, the capsule in which the four humans were separated from the reusable rocket. Weightlessness set in, the four passengers were briefly allowed to leave their seats and laughter and cheers could be heard.

At its highest point, the capsule reached more than 100 kilometers above the earth before it landed in the west Texas desert, braked by large parachutes. «Best day ever», was heard from the capsule after landing. The rocket stage, which is also reusable, also landed vertically back on earth.

Bezos had announced the flight a few weeks ago – also in the expectation that it would become the first billionaire to test his own spaceship. Then, however, the British Richard Branson had pushed his way. His “VSS Unity” from his company Virgin Galactic had already risen to an altitude of around 86 kilometers in the US state of New Mexico on July 11th. It is a matter of dispute among experts whether Branson was actually in space: The International Aviation Association (FAI) and many other experts see 100 kilometers above the earth as the boundary to space, but there are no binding international regulations.

Bezos had congratulated Branson on the all trip – and now Branson returned the congratulations. “Well done,” wrote the billionaire on Tuesday via the short message service Twitter. “Impressively!”

In addition to fulfilling their own dreams, the billionaires also hope to enter the space tourism business. Blue Origin has already announced two more flights for this year – and repeatedly advertised the sale of tickets during the live broadcast of the Bezos All-Excursion. Critics accuse the billionaires of wasting a lot of money regardless of the climate and largely without scientific research interests.