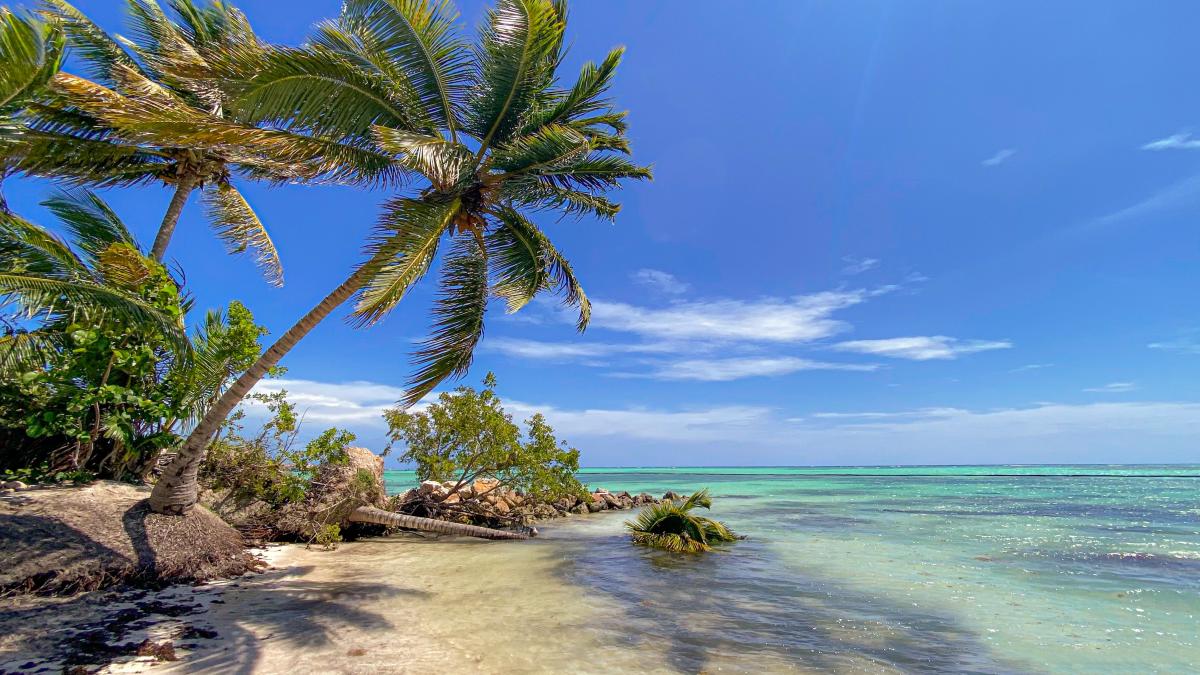 Wpoor sand on your skin, an exotic cocktail in your hand and the gentle rolling of the sea: Who doesn’t dream of a tropical break in the face of icy windshields, fog and pandemic restrictions at home?

Numerous travel offers promise exactly that to those who have been fully vaccinated: warmth in winter. But be careful: by no means all of them are really suitable for escaping into the summer. We did the performance, temperature, flight time and price check for seven popular regions.

Gran Canaria: In the dunes instead of in the sea

To be honest, it can get chilly in the Canary Islands in winter. The Atlantic is pretty cool until May. Just 18 degrees are measured off Gran Canaria in February, March and April – that’s only something for sporty people. This is compensated for by great dune hikes, an infrastructure like at home and the perfect flight connection with several flights a day.

Water temperature in Gran Canaria in March: 19 degrees. Air temperature: minimum 15 and maximum 22 degrees. Rainy days: 4. Flight time: 4 hours. A nice four star hotel like that „Riu Palace Palmeras“ in Playa del Inglés you get with flight and all-inclusive meals in March from 1000 euros per person for a week.

Egypt: There is no cheaper holiday

Inexpensive to the pharaohs: Egypt is the cheapest destination where you can splash around happily all winter long. Since the pandemic kept many unvaccinated people away, prices have fallen again.

The water temperature in Hurghada, on the other hand, does not drop below 22 degrees even in March. The young bathing destinations on the Red Sea such as Marsa Alam and the “Egyptian Venice” El Gouna attract with long beaches and short flight times.

Water temperature in Hurghada in March: 22 degrees. Air temperature: minimum 17 and maximum 25 degrees. Rainy days: 0. Flight time: 4.5 hours. The price for a good four star hotel like this „Sunrise Holiday Resort“ in Hurghada is from 600 euros for a week with flight and all-inclusive meals.

Dubai: After shopping in the desert

city ​​or beach? If you don’t want to make a decision, you can fly to the Emirates. Because Dubai has both. Within six hours you are in the Arabian land of tomorrow with glittering skyscrapers and well-groomed beaches.

The Expo will also take place until the end of March. The world exhibition was postponed by a year because of the corona pandemic. In Dubai, the world’s largest shopping malls, a trip to the world’s tallest tower and a tour of the nearby desert are all tempting – for sandboarding or spending the night in a Bedouin tent.

The water has 23 degrees in March. Air temperature: minimum 17 and maximum 27 degrees. Rainy days: 1. Flight time: 6 hours. Package prices start in March at 1300 euros for a week’s beach holiday in a five-star hotel like this JA Beach Hotel with flight and half board.

The plane takes six and a half hours to reach the Cape Verde Islands. The reward for the long journey to the barren Atlantic islands off the Senegalese coast are perfect beaches and thundering Atlantic waves in a silky-soft climate.

A few years ago, modern hotel complexes were built on the powdery sugar beaches of the desert islands of Sal and Boa Vista. If you want more than swimming, you can hike there or explore the neighboring islands with propeller planes. The constant wind also makes Cape Verde an excellent destination for kite surfers.

Water temperature on Sal in March: 24 degrees. Air temperature: minimum 19 and maximum 25 degrees. Rainy days: 0. Flight time: 6.5 hours. Prices in March from 1250 euros for a week in a four-star hotel „Budha Beach the Senses Collection“ with flight and half board.

Chic and sensual, Miami Beach is the beach in the world where the most fashion shots are taken. In Florida’s big city with a beach connection, life pulsates even during Corona times.

Ocean Drive is a never-ending casting show for beauties and tanned boys. See and be seen in the designer restaurants, the fashion boutiques and on the perfectly manicured beaches, where uniformed waiters serve piña coladas and daiquiris on lounge chairs.

Dominican Republic: Diving in the Caribbean

Water rats who only go over 25 degrees in the sea have to fly at least as far as the Caribbean in winter. That means eight to ten hours flight time and six hours time difference. In the Dominican Republic, for example, they find ideal conditions for soaking up the sun: during the day the air reaches at least 26 degrees, at night it’s still 20 degrees.

The days of diving, catamaran sailing and surfing just fly by. However, samba and Caribbean drinks in the evening are accompanied by humid tropical nights. So connoisseurs better pack light cotton clothing.

Maldives: A paradise for snorkeling

The water on the beaches of the Maldives is a little warmer in March, namely a comfortable 29 degrees. The tiny palm islands off the Indian coast are a paradise for divers and snorkelers: the underwater world there offers a fascinating variety of shimmering fish and unusual plants. Water skiing and beach volleyball complete the sports program.

Explorers, on the other hand, are out of place: Most of the Maldives islands can be circumnavigated on a walk. And full board is advisable: there is usually only one hotel per island where you stay and nothing else.

Mandouki is back, Créteil is sinking, derby for Racing and for Fleury… Your football weekend in Ile-de-France