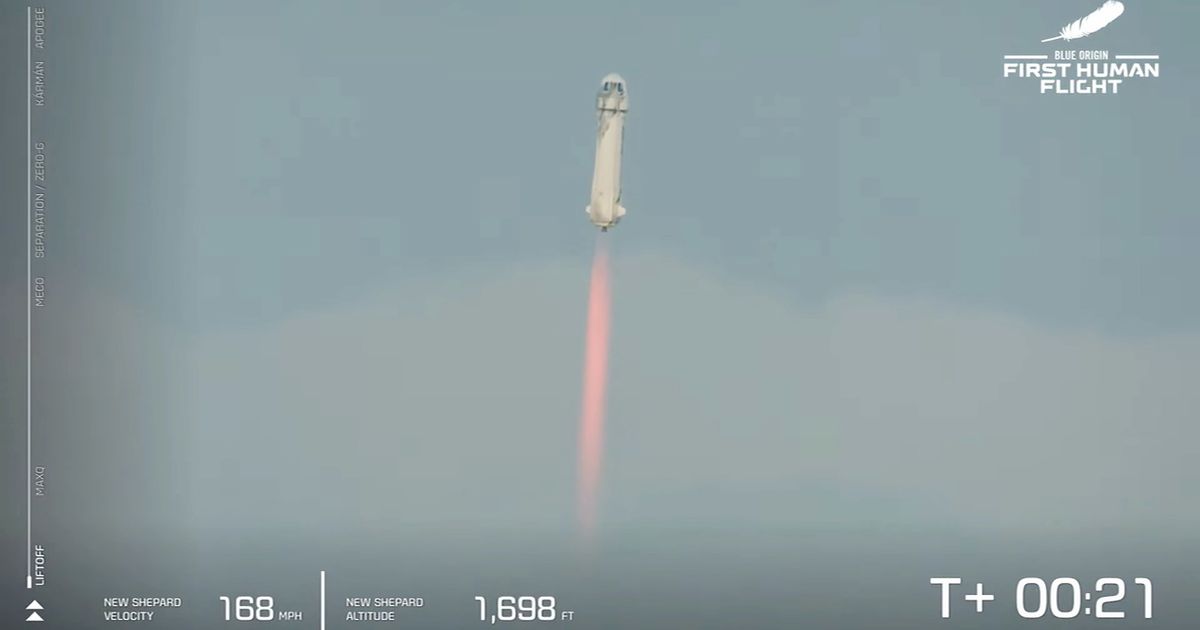 Jeff Bezos, the richest man on the planet, joined the astronaut club on Tuesday aboard his company’s first manned flight Blue Origin, marking a new milestone for the burgeoning space tourism industry.

The New Shepard thruster, with a capsule carrying four people at its top, took off at 8:11 (13:11 GMT), a few minutes behind schedule, from an isolated site in the Western Desert of Texas at 40 km from the small town of Van Horn.

A few minutes in space

New Shepard accelerated into space at speeds exceeding Mach 3 using an engine running on liquid hydrogen and oxygen, with no carbon emissions.

The capsule then separated from its propellant, and the neo-astronauts spent a few minutes 107 km, beyond the Karman Line (100 km), the internationally recognized limit between Earth’s atmosphere and space.

They were able to admire the curve of the blue planet and the deep black of the rest of the universe, from large picture windows accounting for a third of the cabin area. “It’s all black in here,” exclaimed Wally Funk, according to the audio stream coming from the capsule.

After a few minutes in weightlessness, the capsule descended in free fall before deploying three giant parachutes, then a back-propellor to land delicately in the desert after a flight of about ten minutes.

When they left, the four passengers, in good shape, were greeted by cries of joy from the Blue Origin teams. Jeff Bezos wore a cowboy hat when he left the module.

The mission comes on the 52nd anniversary of Neil Armstrong and Buzz Aldrin’s first steps on the moon.

On July 11, the founder of Virgin Galactic, Richard Branson, also crossed the confines of the earth’s atmosphere, toppling the former CEO of Amazon in this battle of billionaires.

But the Briton only reached 86 km altitude with his Virgin Galactic spacecraft.

>> Watch the take-off of the Virgin Galactic carrier plane that carried Richard Branson into space:

But Jeff Bezos, 57, insists: “This is not a competition”. “The first one who was in space was Yuri Gagarin, and that was a long time ago,” he assured Monday on NBC, referring to the Soviet hero of the conquest of space in 1961. .

“It’s about building a road to space for future generations to do amazing things there,” he said.

The founder of Amazon created Blue Origin in 2000 with the goal, one day, of building floating space colonies, endowed with artificial gravity and where millions of people could work and live.

Today the company is developing a high thrust orbital rocket called New Glenn, but also a moon landing module in the hope of securing a contract with NASA and its Artemis program, and becoming the agency’s main private partner. American space.

Blue Origin plans two more launches this year and “many more” as early as 2022.

“We have had 7,500 bidders in over 150 countries, there is obviously a great interest,” said Bob Smith, adding that the first flights “are leaving at a very good price.”

A third billionaire, Elon Musk and his company SpaceX, will join the space race in September with an orbital expedition made up entirely of civilians aboard his Crew Dragon rocket. SpaceX has also teamed up with the company Axiom to take visitors aboard the International Space Station.