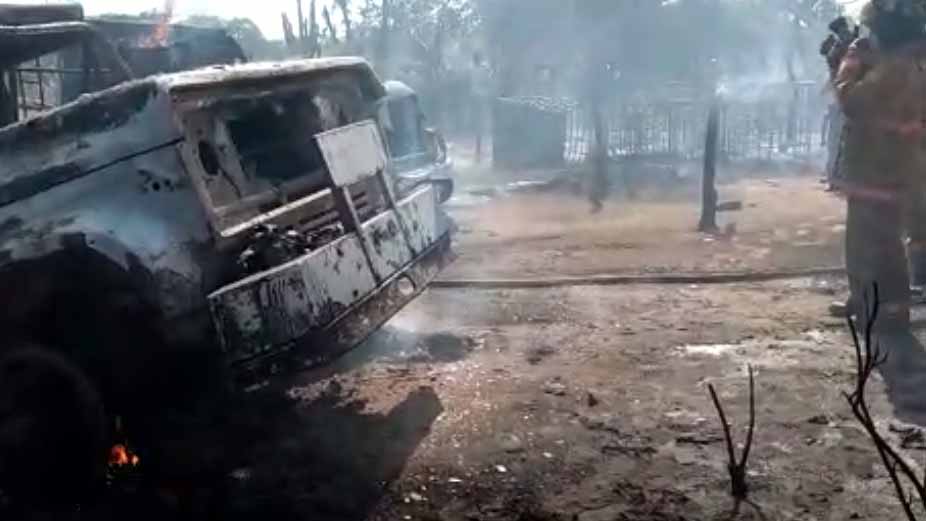 Five people were seriously injured with third and fourth degree burns, due to the explosion of two tanker trucks in which fuels are allegedly transported to Venezuela.

Julio Murillo, deputy commander of the Fire Department of this border town, assured that the explosion occurred around 2:30 in the afternoon this Saturday in a warehouse located in an area known as Villa Naty.

“Apparently they were repackaging the fuel between the two vehicles and something caused the explosion, but fortunately this place is far from the urban area, although there are some nearby ranches and this caused panic among its residents,” he said.

He said that the vegetation around the area where the winery is located was also affected, which is on the old road that goes to the municipality of Uribia.

Shortly after attending the emergency, Murillo reported that the injured were transferred to the San José de Maicao hospital, where they are being treated for the burns they suffered.

These were taken by some people on motorcycles to the assistance center and who expressed that they lived moments of great fear when hearing the thunderous sound of the explosion and seeing the flames that were produced instantly.

It was known that all those who were admitted to the hospital are men, two of whom are migrants and are in stable condition, since they only have second-degree burns, like another of the victims. Two others have burns on 100% of their bodies and it is possible that they will be transferred to a burn unit in Barranquilla, which could be at the Clínica de la Costa.

The vehicles were completely burned, as evidenced in videos that circulated on social networks by onlookers who came to see the fire that was caused by the explosion.

The authorities initiated the corresponding investigation to establish the exact reason why these vehicles exploded.

A similar tragedy, but with greater consequences, was registered on July 6 in the Troncal del Caribe, near the town of Tasajera, Magdalena, after a tank car loaded with gasoline overturned and minutes later caught fire, when its inhabitants they took the fuel out of the vehicle.

Seven people died on the spot and 38 more died in different healthcare centers around the country, due to the serious burns they suffered to their bodies.