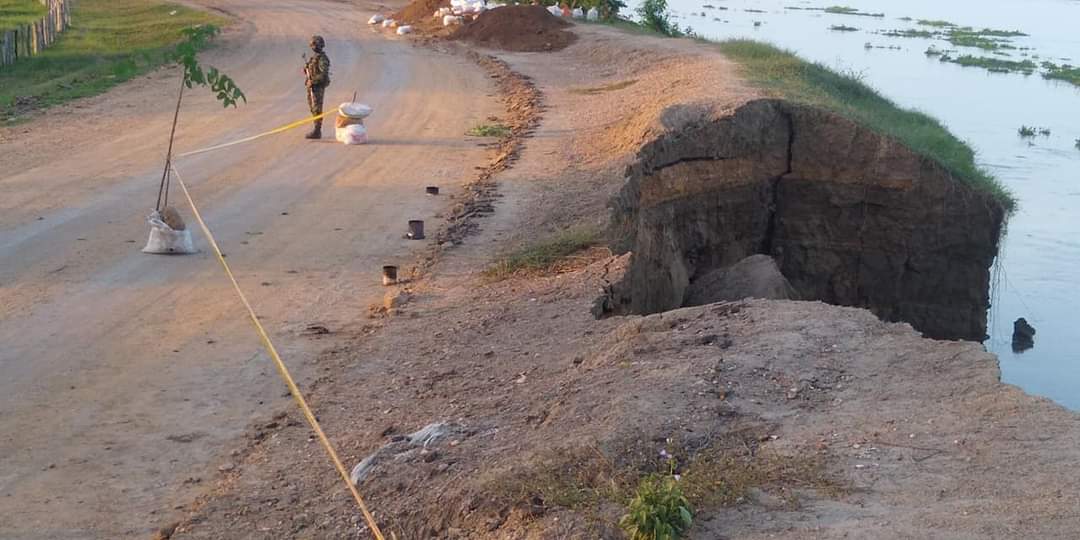 The progressive detachment of the slope at kilometer 2.1, La Bonga sector, of the Salamina – El Piñón road, has increased the anguish of the inhabitants of these two towns of Magdalena.

On Sunday morning, the community found that due to the undermining on that bank of the river, the land continues to yield. Today the slope is only one meter from the road.

“We are distressed by this new critical point, that is why we demand that the committed works be done soon and with responsibility,” said Alfredo Castillo, a rancher in the region.

The farmers stated that this point, close to the ferry port, due to the way it erodes in less than 48 hours, would be breaking part of the road. “As things are going, we will have to sleep with one eye open and the other closed,” said Jairo Sánchez, a worker at the river port.

The Magdalena Infrastructure Secretary, Rafael Martínez, made known his concern over the delay in the start of the dredging works on Tamarindos Island, but the Disaster Risk Management Unit calmed the anguish, commenting that work is being done . The start of shore stabilization was announced on Monday.

According to the official, he is concerned that 6 days after assuming said commitment in the Risk Management Council, the Ungrd will not start dredging. “This is one of the main actions to prevent further erosion that disabled the Salamina – El Piñón road.”

Martínez noted that machines from the Government and the municipalities, coordinated by Invías, have carried out works to temporarily connect Salamina with El Piñón ”. However, he pointed out that “these works are at risk, since erosion will not stop while the UNGRD dredging and mitigation works begin.”

The rancher Benjamín Santos, one of the spokesmen for the productive forces of the Rio subregion, confirmed that erosion is being dealt with by dredging the island. “The amphibious backhoes are making the channels so that the dredgers can work,” said.

He indicated that this information was given to him by the engineer in charge of the work, Juan Carlos Martínez, and was corroborated with videos of overflight of a drone.

He noted that this Monday begins the stabilization of the shore and on Wednesday the containers that will move the sediment from the dredging to the slope will arrive.

“I call on the residents and mayors to be wise, that we all pull to the same side,” he exhorted.

Santos said that this emergency “is another virus that has no religion, no race, or political color. The interest is none other than saving the region from a catastrophe, that is why each one of us must put a grain of sand and not distort the information, “he said.

The commitments of each institution in the framework of the emergency are: the National Unit for Disaster Risk Management supplies the equipment for dredging work, and provides backhoes to remove material in the Tamarindo island sector. It also makes adjustments to the design of shore protection works.

Invías reestablishes land communication between Salamina and El Piñón, and advances the activities for the new route of the road. Cormagdalena performs flow and velocity measurements and permanent monitoring of the river and provides technical assistance to dredging tasks.

The Mayor’s Office of Salamina, the process of administrative expropriation of the property for the new layout of the road, and the Governor’s Office shall issue the administrative acts of Public Calamity and adoption of the Specific Action Plan; Likewise, it will have machinery to support the work of protecting the critical site.