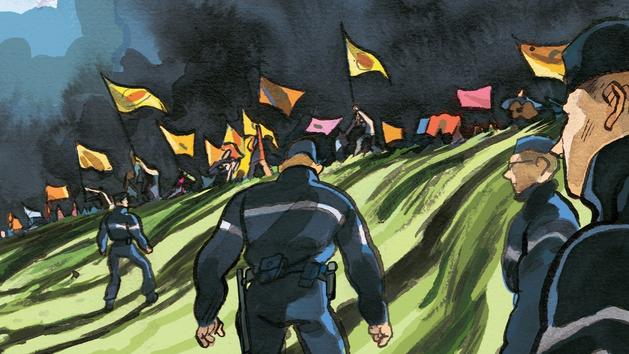 What to do with our nuclear waste, when the atom represents nearly 75% of the French electricity mix? If this share should drop to 50% by 2025 – it is in any case the objective of the government -, the question of the storage of used materials remains. And it is complex.

To try to see a little more clearly, two journalists investigated the emblematic industrial center of geological disposal (Cigéo) project of Bure, on the borders of the Meuse and Haute-Marne, which plans to bury our waste nuclear in 265 km of underground galleries. Gaspard d’Allens, holder of a master’s degree in public affairs, worked with Cécile Duflot at the Ministry of Housing before converting to journalism. With his co-writer Pierre Bonneau (pseudonym of Andrea Fuori), specialist in social movements and the criminalization of struggles, he had already published in 2017 Bure, the nuclear battle, threshold.

In their comic One hundred thousand years, published last Thursday, the two journalists recalled that nuclear waste is currently stored in active power plants or in the process of being dismantled, on military sites, in old uranium mines … But this technique is not viable at long term. From 1946 to 1972, a large part of the waste produced was first submerged in the oceans. France sent more than 17,000 tonnes of it by the bottom, until this practice was banned. Today, it is land burial that is now recommended.

But where to store this nuclear waste? Different sites are mentioned at the end of the 1980s and, each time, the local population rebels. The commune of Bure is finally retained, in a sparsely populated area. To convince communities, the nuclear industry, largely supported by the State, is setting up what Gaspard d’Allens and Pierre Bonneau call “The factory of consent”. The principle is simple: finance local development with millions of euros, up to surrender «indispensable».

Concerns persist and seem legitimate: in the United States, the Waste Isolation Pilot Plant suffered in 2014 the bursting of a package which contaminated workers and the entire underground installation.. In the former salt mine of Asse, in Germany, major leaks of radioactive brine were revealed in 2008. In France, the independent expert Bernard Thuillier, doctor of science from the University of Reims-Champagne-Ardenne , estimate that “The house of cards [est] extremely fragile ” in Bure: risk of explosion of hydrogen produced by corrosion of materials, fragility of ventilation, risk of fire in “Bituminous packages” … The Nuclear Safety Authority (ASN) also mentions “Reservations”, without however calling into question the principle of deep geological disposal, “Only responsible solution” .

In recent years, the struggles between opponents of the Cigéo project and the police have received a lot of media coverage, in particular with the installation of a ZAD in Lejuc wood, evacuated in 2018. The National Agency for the Management of Radioactive Waste ( Andra) points a finger “Very violent organized groups” , while the League of Human Rights denounces a “bullying” against opponents, who claim to be victims of police violence. The Nancy judicial police have created a special cell to monitor activists 24 hours a day, with geolocation and wiretapping.

Cécile Guillard’s clear and vibrant image effectively supports the point, with a certain style, which is not always the case with comics of this type.

Obviously, the authors accept the bias of their comics. However, recounting with empathy the struggles of the opponents did not prevent them from carrying out an in-depth investigation, with numerous factual elements supported by sources and some twenty pages of appendices. Cécile Guillard’s clear and vibrant image effectively supports the point, with a certain style, which is not always the case with comics of this type.

The work of the Bure laboratory will last 130 years and will have the mission of containing the radioactivity of the nuclear waste stored for 100,000 years. How many will it take to convince the skeptics?