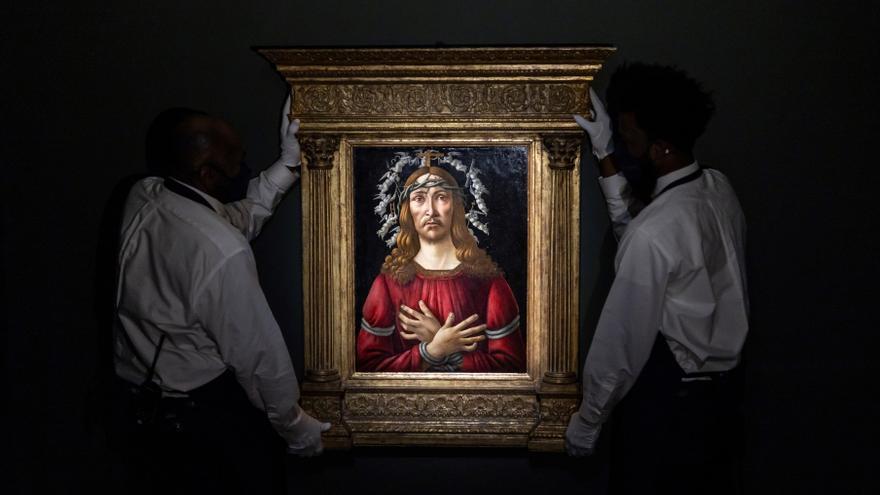 One of the few paintings by Sandro Botticelli that are still in private hands, ‘Christ the Man of Sorrows’, will lead the auction of classical art next week from Sotheby’s a year after another work by the Italian Renaissance artist fetched $92 million.

“We believe there is only about five paintings by Botticelli in private hands“, the director of the department of Great Masters of Sotheby’s in New York, Christopher Apostle, told Efe, who stressed that this particular painting was painted when the painter was already more than 50 years old, with what it is about one of his later works.

“It is an introspective painting, a metaphysical painting of a mature person who is facing his own mortality, and that’s what makes it so emotional,” added the expert, who noted that this painting is valued at about 40 million dollars.

representing the Christ with a crown of thorns, surrounded by bonds, with his hands crossed on his chest and a halo of angels flying over his head, was made at the end of the 15th or beginning of the 16th century, and has a sober and austere style, far from the innocence of his first works, such as the famous ‘Birth of Venus’.

The piece was last auctioned in 1963 and has been in private hands since the 19th century, so it has not been widely studied.

The current auction has led to a discovery by Sotheby’s experts, who have found a sketch of a virgin with a child hidden under the painting of ‘Christ the Man of Sorrows’. “Is a exciting insight into the artist, how he worked and how he created his paintingsApostle said in front of the painting, which since October has been exhibited in London, Dubai, Los Angeles and Hong Kong before its sale in New York next Thursday, January 27.

The representative of Sotheby’s pointed out that there is “a lot of interest” among collectors for this piece by Botticelli, although he did not venture to say whether it has a chance of exceeding the 92 million that ‘Young man holding a medallion’ reached a year ago. “You never know. There are times when a piece that no one talks about is valued at $100,000 and ends up reaching $5 million.“, he pointed.

For the first time, Sotheby’s Masters Week will also include an Egyptian limestone sculpture estimated to date between 2350 and 2990 BC. C., which is estimated to be worth between 3 and 5 million dollars.

Work less to live better, or the new trend of “dework”

Documentary on the Toulouse Stadium, in cinemas on April 13: the first images unveiled